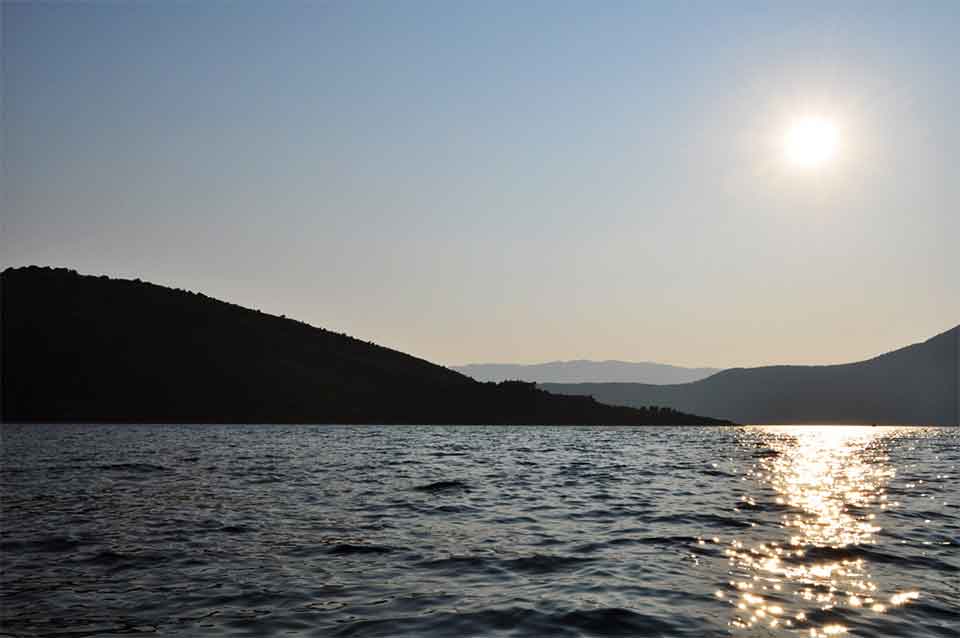 Walking the harbor that day, I saw a crone
sitting at a loom on her front porch.
Was this Penelope, I wondered, weaving
in midday heat while all the village slept?

I heard the heddle’s rhythm, saw yellow threads
as burning towers, blue as drifting smoke
behind Achaean triremes heading west.
Or was she weaving me, a passerby?
Soon, I thought, she’ll start unweaving.
She’ll pluck the warp from weft, undo the knots,
respool the yarn as if it never left,

so deep in shadow by then, her story’s just
a dream. Odysseus or I
could walk this road toward home and be unraveled too.

Soldiers escort us and all our luggage
into the farthest building. Sound of stamps.
Sound of power in multiplicate.

Stepping forward, I answer every question—
where staying, how long, who with, what to declare . . .

And if my answers or the way they’re put
cause doubt, they’ll take me to an inner room,
strip me down to just my voice repeating

a single phrase, my name perhaps, some well
constructed lie, or a simple truth this country

won’t let in. But if they like my words,
more forms to fill, and then they’ll stamp me through.

In a wobbly lime-green cab the driver—twin strands
of hair across his balding pate, cigar
stuffed in his mouth, twin soccer balls dangling
from his mirror—argues with the rain,
the two-way radio’s constant static, shoppers
in the fish market, trucks and limping dogs,

never looking back at you in your
dark corner wanting just arrival, like the statues
of martyrs in the park you’re passing, the dying
alders offering up their boughs. Wheels sliding,
clutch thumping, he slams the dash because he missed
your turn, the turn you need, but first you need

his piercing eyes, his argument against
the constant static, his insistence on keeping the meter off. Don Schofield’s poetry volumes include In Lands Imagination Favors (Dos Madres Press, 2014); Before Kodachrome (FutureCycle Press, 2012); The Known: Selected Poems (of Nikos Fokas), 1981–2000 (Ypsilon Books, 2010); Kindled Terraces: American Poets in Greece (Truman State University Press, 2004); Approximately Paradise (University Press of Florida, 2002); and Of Dust (March Street Press, 1991). A recipient of the 2010 Criticos Prize (UK), he has also received honors from, among others, the State University of New York, Anhinga Press, Southern California Anthology, and Princeton University, where he was a Stanley J. Seeger Writer-in-Residence. He has been a resident of Greece for many years.