Author’s note: For about seven years now, Kwame Dawes and I have been writing long poem-dialogues that have so far appeared as four books with Peepal Tree Press, most recently In the Names of Our Families. The following extract is from our work in progress (History) of the last eighteen months. – John Kinsella

Here then is the book of transgressions, the secret plots
of those committed to calumny and the destruction of order —
and I, chronicler of sorrows, practice my art of purpose
in the lists I make, the laws broken, the beauty destroyed,
and standing before the notetakers, the memo-writers,
the collectors of secrets, neighbors who trade to betray
the enemies of the state, and I am filled with caution —
I say I do not know the names of these monstrous machinations,
all I know is a sermon was spoken and the trees
clapped their hands. All I know is that at night,
I hear the cracking of tree trunks, the felling of forests
and the clap of wood exploding in the forests where the fires
have started their deep and hungry consummation
of the earth. I went searching through old papers,
through the forest of my art — the poems I have written and set aside —
to see if I could find complaints against the destruction
of our earth, and what I found were slivers of bewilderment
and no small amount of jealousy for those revolutionaries
who wake each morning with a fire of resistance
in their bodies, who can stare at the wide complex
of human action and the decaying universe,
and found a singular narrative that somehow is able
to consume the billions of years ahead and behind,
is able to shake the Solomonic despair of all vanity,
a chasing after the wind — the persistence
of existentialist resignation, and instead plot the revolution
to change the march of the world. I envy them this,
and can only find hints of hope and faith in my words,
secreted inside the clutter of feeling and the delicacies
of language and metaphor. So, I am grateful for you,
for you who will face the bulldozers, for you who will press
his shovel into the land and do so knowing that there is a deed
ceded to you that tells you that you are truly the husbander of acres
laid out for you. And one last thing, something of an excuse,
but mostly a thought, that my father and his father,
and his father’s father left me nothing, left no legacy of husbandry,
no acres of meaning, and no seed of responsibility;
and so, all I have are the long plantations of words
that I have been cultivating in my fecund heart,
and what is this, if not the scorching of all hope,
if not the great metaphor for the destruction
of all the green that stretches before us?

Far from Jam Tree Gully we don’t know if we will have a house
to return to a house to open out to air to sleep under tin roof where fire
sucks air out of circulation and rules all roosts we might or might not call home
though it is so much of what we are is house with interface between creatures and us,

dwelling imposition imprint troubled free of place and placement
though self-disrupted over vast curve of expansion day-in night-out
the heat-stress how much can the frame take (?) the smoked air
the winged healer the messenger whose health fails straining

to get a breath of parity of nitrogen oxygen argon balance in composition
yet here in the penumbra of flu-fever here the chaffinch twisting the deciduated
tendril over a chilly stream, or the hyper-stilled grey heron so rampant
with full-on constrained energy on the retreat of the estuarial river

almost extra but noted as demi-local at the colder time apropos ‘our’
hottest time of house home this house almost home this cottage though not ours
but nothing is ours and each swing across the globe is the pendulum
the jiggering sway of earth via sun an expansion and contraction of antecedents
and all the surfaces painted over to look different from our same.

And these words, dreams, rounded and sleep,
how is it possible not to envy the genius
of someone who makes language to patch up
the ugliness of betrayal of weakness
of how we hurt and have hurt? And I know
Neville sat in the peculiar mood of tropic twilight,
in stained polyester shorts, cutting his ten, smoking
slowly in the half dark, considering those words
turning and turning them around in his head,
waiting for death, waiting for the end, hoping,
though knowing that what would be left
would be simply the inheritance of all artists,
some will be interred with their words,
and this will be all. At eight fifteen the light
grew thick and muddy. He coughed. The island
was filled with long sharp knives.

Children in that real magical place of green
and red and brown, play cricket on a red kerchief
of ground; I am stealing this from a poet who has perfumed
her metaphors and myths so thickly that her publishers
mistake her for a novelist, and indeed, it is novel as in “new”,
this song, but I confess that a novel has not turned me to tears
not in years, and perhaps never, and yet this thing,
that familiar between the landscape of my making
and unmaking, the language of my dreams,
desires and the gummy stomach churn of Kingston dawns
an ailment associated with a decade, those seventies
where all feeling began, where I lost confidence
in what I know and what I feel, when I grew to accept
that sometimes, a ball could move too fast
for sight, and I, bewildered, must accept the limitations
of my body. There in Kingston, that sensation of desire,
lust, fear, joy, hope, and beyond that, the merciful relief
of faith — this is the language of this art Curdella Forbes
has given me in her art, in the pitch-perfect music
of her novel, and her people, her characters are aging
at the rate of my aging, a generation told as all great art
will manage to do without guile or intentionality,
but with the urgency of a body so full of music,
so long held in: a virgin saint, full of desire,
but with the fortitude of habit to keep all pleasure inside,
held there — this is what the art made here is,
and I accept it as a gift — a long poem, an epic history
of memory written before it settles in us,
and this is the great rounding, the end meeting
the beginning, the envied thing — the art
I have consummated, the flight of all true songs,
yes, this is the all of it. How often I return
to my old man, Neville, when the body softens,
I mean, and the air is heavy with the resignation
I do not know and may never know.

Again, I’ve transplanted my head into the lantern of Fastnet
to view the migration of souls and find nothing that will let
me ride outrigger to new worlds as all worlds are made old
so fast, half-life resolution faded as vanity sparkles in embroilments
of ‘race & culture’ without compassion for people living next
door with different ways, crossing paths on the way to the shops,
gathering breath where they can as the great ocean bake-off
leaves fish and krill and squiggles in the currents solecised
into languageless moments the most bereft moments of all.
There are no saviours among the self-declared tech prophets
and their largesse of tiny stars that are within reach of long-armed
socialites with hands laved by wealth. I’ve transplanted my head
into the lantern of Fastnet to escape fever by taking on more fever,
furious medium of sea that in changed consistency will still
make waves that break laws of wave peaks make rogue outside
iconic images of lighthouses to be snapped and cast aside.
Shelter with me, all of us, and let me shelter with you together.

The undocumented fall into single file to thread
the narrow paths of the Sierra, before the long mountain crossing
overlooking the meandering turns of the Snake River,
its deep brown calm over the land, and land that has in its soil bones
as ancient as First Nations and those before. These are the last steps
before the noise of arrival, the immigrant assured of all memory,
learning new roads, new rituals, new faces, learning to read the skies —
but the border is a false construction, we know this, that before the border,
the land continued uninterrupted, and became its own language,
a long novel of climaxes and denouements, all this before the grand breath
of the ocean. But we call them undocumented as yet another of the myths
of nation; after all, their names are written in government ledgers,
in the grand books of baptism and communion in the cathedrals,
ancient as the ships of Cortes and his monstrous agenda,
they are registered in the songs of lands that have known both blood and delight.
This is the documentation of our humanity — and for a brief respite,
between one calamity and the other, all that stands before us
is the untouched terrain, the land so contested it has discouraged the intrusion
of guns and machines. It is the interim, the moment between
darkness and darkness, where the stars spread out deep into the night.
On the edge of two nations is a bungalow of cages and cots.
Tonight, five mothers stand on the hillside with candles, smoking cigarettes,
repeating prayers for their dead with faith so strong it conjures
the scent of their dead children, those who crossed so many borders
before this last where in the heavy musk of detention the fevers took them,
their poor emancipated bodies hungry for the dense fortifying of peas
and bright yellow cornmeal turned with the slow rites of the poor.

from Caher Mountain and the rough edge of the Sheep’s Head, the point of loss,
where too often someone is swept away, sudden and vanished as hooded crow
or seabird that doesn’t settle again, just gone with lamentation

shuddering waves and shifts, foam, the swell a signature of sway,
of the greater heaves and twists of land-prayer gone adrift,
or let loose in tidal currents and forgotten like microplastics

or slicks from the decades-old Whiddy Island oil terminal disaster,
those syncopating rhythms of ships and salmon farms and deathcows
grazing edges of sea-green froth arising to marsh the cradle

neck of the sheep projecting into water-mostly-body,
on the Way, the horn of cow digging copper from giant’s flesh,
bringing family here to take root in rock and find sanctuary in a giant’s
head always looking out, panorama of the habitué, walker’s folly, deep needs. 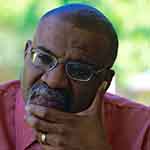 Born in Ghana and raised in Jamaica, Kwame Dawes is the author of twenty-two collections of poetry, including, most recently, Nebraska: Poems (University of Nebraska Press, 2019). The recipient of the Windham-Campbell Prize for Poetry, he is a chancellor of the Academy of American Poets, a Chancellor’s Professor of English at the University of Nebraska, and the Glenna Luschei Editor of Prairie Schooner. 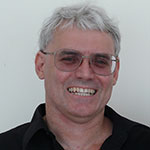 From wheat-belt Western Australia, John Kinsella has written more than forty collections of poetry and also fiction, plays, and nonfiction. Kinsella is a Fellow of Churchill College, Cambridge University, and professor of literature and environment at Curtin University, Western Australia. Picador published his selected poems, Drowning in Wheat, in 2016.