We heard the trucks pull up, the barking voices,
a woman in the street –Irina? – putting up
a fight. Each night, the bell’s insistent buzz,
the foot-stomps on the stairs. My boy in my lap,
I sat in darkness, two fingers pressed to his lips.
We heard their boots kick open the landing door
then cries. Each night that week, they came for more

until our long white corridor was silent
and those flats were boarded shut. I had not known
there were so many. Half the building went.
Half the city. We just made out their buzzing phones.
Someone said something about a holding zone
but where? We whispered their names. Danuta, Jan,
the baby Roza; Niko and her mad Italian;

a couple I’d never spoken to, who’d pinned
a blue glass eye to their door. Somebody said
the men were hand-cuffed, there was a field of planes.
The radio played eighties pop ballads,
the telly flashed its messages in red
between the sit-com re-runs, and old Pathé films:
More news to come. Please stay at home. Be calm.

Days later, they ordered children back to school.
I walked my boy across the muted streets
to Miss Powell with her swollen eyes and bell
and the children waiting on the chalky asphalt,
so few then – Amanda, Sarah, Rory, Paul –
to be taken to their classroom, up the stairs,
past the empty hooks, the stacks of plastic chairs.

Editorial note: “The Trucks” appeared in Lowe’s chapbook The Neighbourhood (2019). 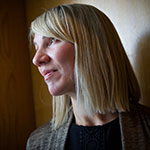 Born to an English mother and a Jamaican-Chinese father, Hannah Lowe is the author of Chick (2013), which won the Michael Murphy Memorial Award for Best First Collection and was shortlisted for the Forward, Aldeburgh, and Seamus Heaney Best First Collection prizes. Her second collection, Chan (2016), is based on her research in migration and mixed-race studies, drawing on the life of Joe Harriott, the Jamaican alto saxophonist who made his name in 1950s London, and Jamaican migrants who traveled from Kingston to Liverpool in 1947 on the SS Ormonde. She has also published a family memoir, Long Time, No See (2015).