To Hisham Harbi
who said to me: “don’t stay in the shadows”
but I didn’t listen

rushing as always,
my shadow jumped
but I hesitated
both the water and I survived

“O, woodcutter
Cut my shadow
Release me from the torment
Of seeing myself fruitless” (Lorca)

I became a balcony
a road, a sea available
a step lost
among windows and shadows
I am an abundant multitude
in the portrait of the ostracized exile
My shadow on the water
many of the ever-repeating one

I am my poem, and outside I gape at my image
I am my image and outside a poem writes me
at a café near the sea

I am my mirror . . . and inside there is an image
that echoes my voice and copies my poem

I am my shadow, and he who walks beyond the light
is a devil in my image, sipping the spirits out of my coffee
in order to stop me from writing

I am the writer of the will, the owner of the corpse
the letters that adorn the gravestone
draw my name
but why do I see in the grave a silence that does not resemble me
(A silence) reading al-Fatiha?

a falcon, free, dreaming of becoming a light
a phantom searching for a bird
that lost form in an instant of sleep
a star shining in God’s direction
a stone has told me, while heaping pebbles before a body
and trembling with death,
Take your book with might
and cross the bridge before a heavenly song is complete
but I stayed
and hid my wings away from my devil

I gave all my organs away
to the destitute lost in the square
to the stray dogs
and to the barren trees
I returned whole, without fruit

my job is
to patch road holes where shadows escape
in my dreams I store shadows for naked roads
their fingers wooden bridges
their feet trunks of palm trees
their waists narrow like a poem that does not see
at noon, the passersby wake up to a cloud of dust
spelling thirst, saving the trace of footprints
may a shoe find its way home from foreign roads

I Patch Them and I Walk Away

my job is to patch shadows
the shadow’s job is to patch footsteps
the footsteps are busy patching the road
mending it with intent
The road’s job is to save the trace
but we grew used to forgetting
a lover climbed a tree, and a poet mounted a wall
patching the sky
so no martyr would fall on a funeral march upon its return empty-handed
did you act the roles, all of them?
I just patched them and walked away

when exuberant, I have a way
I open a window to the river
I let snakes hunt water birds
there is a runway for fog in the sun
I build a cottage in a cloud
who can stop my step which the sculptor carved
on the mirror
and forgot about us?

A Shadow of the Qutb and the Order

If I were his son, I would use a Freudian axe
and destroy all his poems
cut off the roots of lineage in the mixture of mud
but I am only a resigned shadow
I tease and race him into the field
we water the grass of poetry in the mud of words
he lives in rhyme, a prophet of music
I spread the rhyme scheme into prose, prostrating it like a rug
for the impoverished spirits in the fields
I count my victims of mud, “متفاعلن rhyme scheme after rhyme scheme
later I collect the residual images of the sunset
in the mirrors of eyes
I stretch the shadow for them to kill us, together

I turned out not to be a shadow
as I was told by sacred books
in the dust of libraries
I am rather the echo of the voice of God and I breathe into it
and God does not breathe into shadows
as sacred books in the hearts of passersby have told me
the sky could not but exhale
a whole existence
where then did my body go?
which ship sails now into the deep sea?

Translator’s note: I am grateful to Francesca Bell for reading earlier versions of the poems and lending her exceptional poetic sensibility for the tarjama when needed. 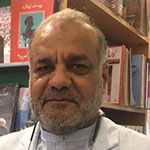 Muhammad Harbi is an Egyptian poet and journalist. He is the senior editor of the cultural and literary sections of Al-Ahram newspaper, a leading Arab daily based in Cairo. Born in a small village in the northern part of the Nile delta in 1961, Harbi moved to Cairo to study journalism and media. He holds a degree in mass communication from Cairo University. Even though he started composing poetry in high school, Harbi emerged as a major published poet later in life, publishing his first collection of poetry at the age of fifty. His poetry has repeatedly been lauded for its deep and reflective connection to the natural world and geo-aesthetic sensibility. Harbi’s published collections include three Arabic books of poetry, “By the Sand as it Seduces,” “Seventeen Years to Catch a Cloud,” and “Upon a Shadow I Trod,” the last of which is the source for these translations. Harbi’s forthcoming work includes three more books of poetry, “Alone, I Set Off with My Book,” “A Diary of a Retired Demon,” and “A Balcony for Seduction.” In addition, Harbi has written and produced numerous documentaries in collaboration with his wife, Maha Shahbah, a journalist and filmmaker. 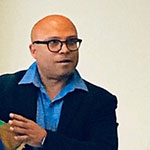 Mohammad Salama is professor and coordinator of the Arabic Program at San Francisco State University. His recent books include The Qur’an and Modern Arabic Literary Criticism: From Taha to Nasr (Bloomsbury, 2018) and Islam and the Culture of Modern Egypt (Cambridge University Press, 2018).