I will never think of this in the same way,
watching the woman in her daily brown skirt
throw her own body against the fence
and try to climb.
We believe in freedom. She does,
but she hits the fence like the wind
and still it keeps her
from the clean water of another life,
the dream of another imagined world
until finally she does nothing, but with all her might
she throws a rock over
so something will reach
that destination of justice
she has walked toward.

What about the meek, the wretched,
the tired, the poor and yearning, the vulnerable
ones in their countries of life, thieves
who, like the vigilantes at the border,
with no fiber of mercy, no humanity,
have lived only to be free,
no hunger or pain about them,
not for the fragile being of that young woman.
The Americans forget they were land thieves here,
the takers, the soldier gangs.
Like their poor dogs
some will never find another bone
to crack, some gristle
or other nerve of mercy
for the penned, fenced children,
little birds locked in a room of strong windows.

I am embodied first by the numbers
given my grandparents,
no choice but to sign the Dawes Act.

Outside under the night moving sky
I wonder
what it is to be made of this continent
from the beginning.
I came from the salt and water of those before me
before the creation of zero,
and then the numbers given my grandparents
by the American government,
and the names that belonged to others.
The past we have not forgotten.
They said you only pass on the people’s story
by telling it. You keep it by giving
it away. And so I do.

For children of this land,
yesterday is close as today.
I am one of the Indian Horse people
alive since the last standing treaty.
We are not yet the end of our line.
And I am not yet the end of their plans.
And still the standing equines
hiding in the rich forest,
swimming our rivers,
so alive they breathe
for us, and we share the love,
embodied this way, water and blood,
knowledge passing between.

Once I was told you become what you think.
So I think the gone animals back
and I am the ivory-billed woodpecker,
the river of sharp teeth,
swimming black turtles shining,
all that fell
from this life I call
whole. 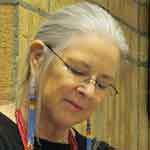 Linda Hogan (Chickasaw Nation) is known as an activist writer, award-winning novelist, poet, and essayist. She is the author of numerous books on topics of ethical, political, and spiritual concern for Native peoples: Dark. Sweet., Solar Storms, Mean Spirit, Power, People of the Whale, Dwellings, Woman Who Watches Over the World, numerous books of poems, and edited anthologies. A History of Kindness and The Radiant Lives of Animals are forthcoming in 2020.