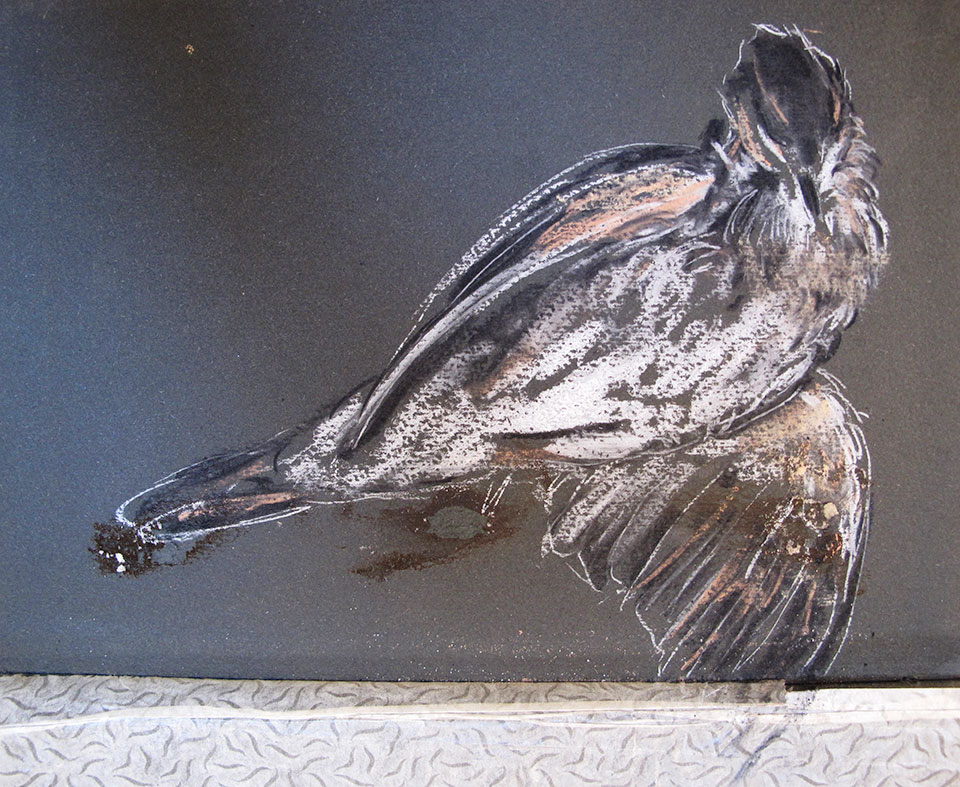 A Note on the Illustrations

Diti Ronen: “I suddenly have this unexplained urge to send you for publication these two poems along with three images—out of hundreds—that were made by Isis Olivier, the granddaughter of Sir Laurence Olivier. Isis, an accomplished French artist, read my poem ‘littlebird’ in 2014, when it was presented in French at the Lodève Poetry Festival, France. Ever since, along with other projects, she continues to draw the moment of the falling of the bird, and we have already presented together four exhibitions, including readings. Surprisingly, the act of drawing the endless moment of the falling, inspired by the poem, is actually done with the help of dead birds that she finds on her way or at her doorstep, unexpectedly. The poem ‘Fifth Bird’ was written recently, right after she told me about a new bird that came to die at her doorstep” (email to Daniel Simon, August 24, 2016).

Isis Olivier: “After Diti invited me to do some artwork for her poem ‘littlebird,’ it took six months to find what I was looking for. On a frosty January morning, there it was: a dead song thrush. Diti was enthusiastic about the first charcoal and chalk drawings. I then spent months drawing and painting birds. When I felt that I had almost exhausted the subject, another bird would appear and then another, literally on my doorstep. From the dichotomy between hope and despair in Diti’s poem to that of life and death, the fallen birds have come to represent lost innocence, merging somehow with the flow of refugees into Europe and the images of their children drowning on our beaches.”

Fifth bird lands on your doorstep
To die at your feet.
Again you are called to open the sky
To send off your visual prayer
The image of the movement
Of an eternal moment.
Again you delve into the body of the poem.
I listen carefully, and write the letters
Of the simple present
Of our Life and of our Death
That return again and again
From Above and from Earth.

Begin from above
slowly,
in a blue so light, so light
and wide and big and white
begin, with infinity
begin with the sky.
With the bird.
Look, she is taking off.
One bird, little. Look.
There she flies.
Big and open –
the entire sky is in front of her.

Begin with the horizon.
Do you still see on it any wisp of smoke?
No, it is not dusk yet,
you cannot see a thing.
And the horizon is far and the sea is close
and the sun is in mid sky.
Now treetops peek out,
appearing.
Begin with the treetops.
They spread, ever green,
their fingers yearn for the tall,
the divine,
for God looking upon them, for
the bird.
Did the sun indeed shine?
And what was the shape of the cloud?
God, watching, did He notice the bird?

Begin with the barrack.
It does not matter which one,
they are all alike.
Begin with the tenth barrack.
Look, a handsome woman now leaves it.
Her walk is proud.
Did you draw her?
Draw her pretty, please,
Pretty, bald and proud.
Did you see?
Her round face, turned slender,
accentuating big, blue eyes.
She looks up.
Sees blue skies
sneaking between the treetops
that you drew, and the tip of a cloud
shaped like a longing.
She notices in detail.
Remembers scent and flavor,
color and sound of before.
Thinking spring.
Sees the bird
passing in front of her,
gliding, her wings spread open.

Begin, with the officer.
Draw him tall.
Accentuate his face, please.
It is squared. Draw his
Strong jaw, his chin
sticking out.
Now the hair: carefully done,
his hat hanging in sloppy elegance.
Have you seen his uniform?
The emblems on his sleeve?

Begin with the rifle.
The officer holds the rifle in his hands.
He stands by the barrack. The rifle in his hand.
Now he lifts his weapon,
aiming to the sky.
Pressing his cheek against the weapon
closing a non-aiming eye
and searching.
Draw him tall. And very straight.
He looks through the crosshair
up, he’s searching,
what shall he shoot now?
The bird now stands on a branch.

Draw him looking at the woman.
Looking at the train of her walk,
the ripples sent forth from her behind.
There, she has entered the latrine.
He once again lifts his weapon.
Determined. Indifferent to the ripples,
indifferent to the train of her behind.
Did you see? Once again, he presses his cheek,
and although it is spring in the world
and perhaps because of
the cold steel
he closes one eye.
Watch.
He aims, concentrates, aims,
and the bird, oh, the bird,
her exactly –
and shoots.
Did you draw it?
Could you draw her sinking?
There, here, so close,
right by, her body
like God landing softly,
unheard.

Begin with the woman.
She hears a shot.
One, and its echoing
knocking at her temples
thudding to the ends of the forest
and back. Was she hurt?
Draw the sound, the bang,
draw her anxiety.
Draw her leaving the latrine.
She walks. There, she walks, she is unhurt.
Stands up and fixes the sack on her body.
Straightens her back. Looks,
the bird is gone.
She sends a wary look.
What was the shot?
She worries about her friends
stepping quickly into the barrack,
to arrive inside, to return.

Begin with the woman.
No, begin again with the officer.
His gaze returns to the woman.
She hurries her step,
looking around frightened, anxious,
her pace a near-run.
He still looks at her.
Amazed. Bending down, spellbound,
lifts the bird from the ground.
She’s twitching, her body still warm.
Feels her weight, how tiny she is,
and so pretty,
now he hands the bird to the woman.

Begin with the bechinalt.
Draw its aroma rising,
spreading through the house.
Rising from the pot, leaving the kitchen,
crawling to the living room,
reaching all the way to the carpet,
to the radio,
to the search-for-relatives program

Translations from the Hebrew
By Elazar Tal Ronen with Lynn Dion

Isis Olivier (https://isisolivier.com), the granddaughter of Sir Laurence Olivier, is a painter of English origin. She lives and works in the Cévennes, a mountain region in southern France. Some of her paintings and prints have been published in France, the UK, and, more recently, the United States and Israel.

Editorial note: “littlebird” was first published in 2010 by the Sal Van-Gelder Institute for Holocaust Instruction and Research at Bar Ilan University, Israel, in a Hebrew/English bilingual edition, including an introduction by Hanna Yaoz and an interview with the poet. The booklet was printed in a limited special edition for researchers and students. The poem has been translated into many languages, including Arabic, Hindi, Albanian, French, Polish, Romanian, German, and Swedish. 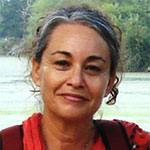 Diti Ronen is an Israeli poet and editor. She has published six full-length collections of poetry as well as numerous essays and articles. Her poetry has been translated and received international and national awards and published in literary magazines and anthologies worldwide, including the November issue of WLT.

Elazar Tal Ronen is a prolific musician, lyricist, and songwriter. A graduate with honors of CCNY in 2009, Ronen is a prominent member of the New York jazz scene. As a songwriter and lyricist, he’s collaborated on internationally praised albums.