Chañaral is a small coastal city in the Atacama region of Chile. Devastating flash floods in 2015 caused an estimated $1.5 billion in damage to the region. Photo by jipe7.
worldlittoday · Chanaral by Laurence O’Dwyer

A desert town of arsenic and sand with a petrol station and seven dogs sprawled in the shade. One grotesque in particular caught my eye: fur practically gone, albino worms riddling the testes, buboes cushioning the x-ray spine. Impossible that he was still alive. Yet of all the dogs, he was the one with two right eyes – a Lazarus who never bothered to thank Christ. I watched his thickening breath, exquisite as death. Then a truck pulled in and the other dogs roused themselves, but he didn’t move. The driver jumped out. It took some time for the heat to settle again. I stood for hours across the road, waiting for a ride north. I had time to get to know this corner of the world: the clapboard houses crawling up the hill, a school shut down eternally for summer. And that dog who taught me how much I hate important people, important places. How much it means to be stuck in Chañaral.

worldlittoday · On Chiloe by Laurence O’Dwyer

On Chiloé they put us up over New Year’s Eve –
four generations of them! The grandfather and his mummy wife –
he had the wink of the slant-wise – “marriage is no party!” –
and other devout observations on youth and pretty girls.

The raised eyebrows of his daughter-in-law were his nourishment.
She cooked feast after feast – we tried to help but only clogged up
the galley kitchen – me, Frank and Helen. Maggie too, the Austrian
we picked up along the way. Then there were the grown children

and the grandchildren – a dozen orbits colliding around the house.
On New Year’s Eve we had mussels and fish. White sparkling wine
and a countdown in technicolor Spanish from the garish TV.
Later, Frank came stumbling into the bedroom – he had fallen

for Maggie. What should he do? Robinson Crusoe – his conscience
a thousand miles away. Alcohol had turned him into a flaming moralist.
I can hardly talk. I advised against the whole thing. It always surprised
me how Odysseus betrayed Penelope – though neither she nor Homer

saw it that way! On New Year’s Day we roasted a pig by the waves.
The grandfather as jester, commenting from the throne of his years.
His wife, the silent counterpoint, to the licking of his lips. Wave against
wave – they poured vinegar over the meat. Such tenderness and flames.

Such greasy oil. It was delicious. Some ripe tomatoes. But most of all
the meat, which needed absolutely nothing. Frank is married now in China.
Maggie disappeared back to Austria. The old man is dead. And Penelope
kisses Odysseus. Happy ever after, with a little something left unsaid.

Author note: With thanks to Sam Pluta and the MacDowell Colony for the recording of these poems at Watson Studio. 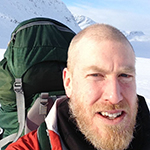 Laurence O’Dwyer is a graduate of University College Cork and holds a PhD in paradigms of memory formation from Trinity College Dublin. In 2017 he received a MacDowell Fellowship. In 2016 he won the Patrick Kavanagh Award for Poetry. He has also won a Hennessy New Irish Writing Award and been shortlisted for the Bridport Prize for Poetry. His brain-imaging research in autism and Alzheimer’s disease has been published in a range of academic journals, and his science journalism appears in the Guardian and the Irish Medical Times. In 2016 he devoted his time to writing and long-distance mountain running, mostly in the Pyrenees. Current projects include a collaboration with Asylum Productions for a theater performance that merges poetry and an academic lecture about memory and neuroscience. He also collaborates with Swedish indie game developer Macalaus, contributing texts for a game about space-travel and the search for home.