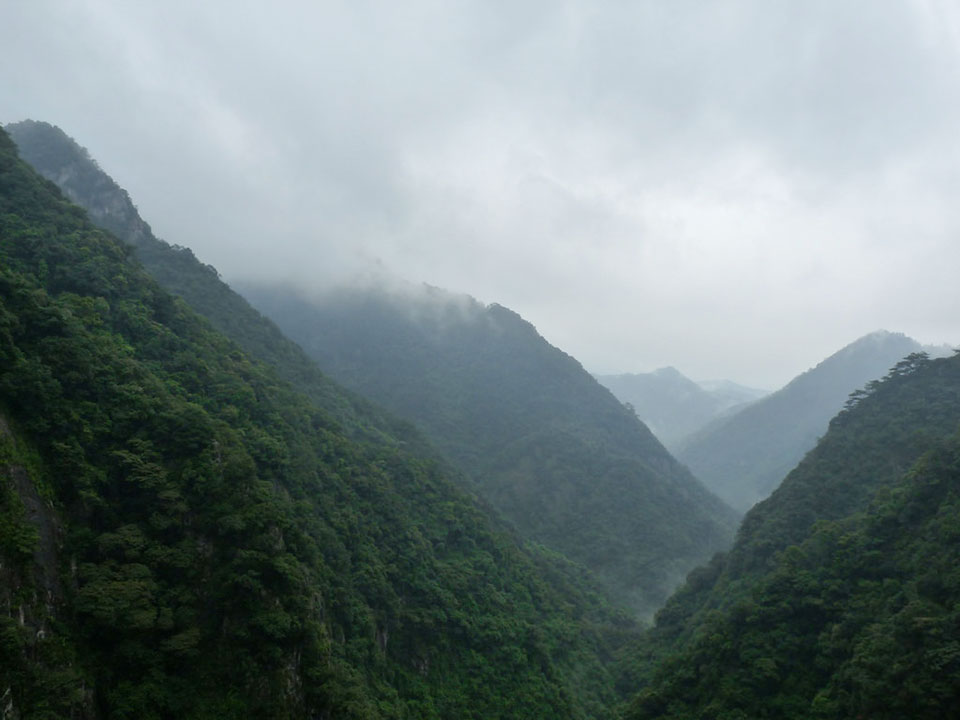 Christopher, Tania, and Isabelle Luna, “Mountains and Rain” (the hills of Fuzhou), September 2009

Looking north you see them,
roads like ragged scars on hard lean ribs:
the lanky green hillsides of Fujian
that stretch eastward in the hot, heavy breeze,
ancient, rounded, weathered as the workmen
who push two-wheeled carts on narrow lanes,
smoking brown stubs beneath straw hats.

The roads climb, escaping to the hills
from the reddish smoke, the taxi horns, the rubble
of a city that tumbles and rises at once:
gleaming fountains with green and murky pools,
parks with cigarette kiosks, ice cream vendors,
mounds of refuse, plowed-up pavement.

On one hill a temple, Buddha smiling
at the silent monks who know, who know;
on another a resort for Westerners
who come beaming on business, hands extended,
with piped-in Manilow, Zamfir;
on a third a tracery of electric towers
ascends like long-legged spiders
to turn the fans, boil the water.

The hills have listened, silent,
endured the wounds, the gouges,
the burden of the peopled centuries,
building, razing, building again,
the valleys filling beneath them
with the smoke of humanity
that passes like the water
down their slopes.

The city is old and new, all at the same moment,
falling and building, dust swirling in the summer heat.
The long main road is construction everywhere:
work crews scrabbling in red dirt with picks and shovels,
old men pushing barrows of rubble, broken bricks, tiles,
young men wielding sledge hammers whose long flexible handles
bend and bow in the steely sun.
Blackened wooden buildings, their clapboard split and rotting,
rooftiles broken, sliding, shedding, are being pulled down
between new concrete structures empty of life or color:
their swayback tops, their mossy corners, their lives
hidden away behind the shutters that keep nothing out,
and only heat and heaviness in – all is going.

No one smiles:
they smoke on corners, along passageways, in bus queues,
shout and gesticulate at young people by the shops
who pass with parcels, their white shirts wet,
their vegetables glowing in orange net bags,
their black shoes and black half-rim glasses
betraying their shows of high life.

The women carry children carefully in the streets,
avoiding rubble-piles, wobbling bicycles, buses.
There are no traffic rules, but only the urgency
of everyone in a rush to move from one tangle to another,
one obstruction to the next.

Everywhere the dust mingles with cigarette smoke
infiltrating everything, a fine powdery grit
whose taste we learn in only hours.
The bus rattles on, winds past open shop-fronts
where shirts and fish and bananas and cigarette cartons hang,
past traffic wardens whose gestures all ignore,
threading the crisscross of cyclists who defy death
at every turn, careening across lanes, into one another,
and down dark lanes that burrow into the earth
behind smoking piles of rubble.
And no one smiles.

Stephen Behrendt was born in Marinette, Wisconsin, and took his PhD at the University of Wisconsin. He lives now in Nebraska, where he is George Holmes Distinguished Professor of English at the University of Nebraska–Lincoln. An international authority on British Romantic literature and culture, he is also a widely published poet. The most recent of his four collections is Refractions (Shechem Press, 2014). The poems here are from a book-length manuscript, Chrysanthemum.