Two Poems, from Greece to Panama

In Andros, I Watch a Goat Run to and away from My Father’s Hands

He opens his eyes. His eyes
the color of its gray coat, his chest
dressed in a single gold cross,

marking faith in a god he’s seen
and never met—pressing it against his sealed lips.
The goat’s eyes shine like early frost.

Apostasia. Serrated blade. Buildings whitewashed
to baffle enemies. I was vapor as we sat
in the Mazda, honeysuckle

invading our empty lungs when he broke
for the hill, staggered on
his stubborn limbs. Maroon-red Champion

sweatshirt staining the stone-walled hill
that divided the island. Knife-toting Goon.
The first time I saw him move that fast, I had lipstick

on my lips, the first blood not yet fallen. Greece.
Greece: a row of locked doors
fogged by his anise-breath as my mother

shuddered. The family waiting for me
on the balcony at dawn. I.U.D. S.I.S.—
Stay in school. It’s the best,

says the rebel-woman song. Go to hell,
says my father, boots pounding up the hill
through thistle & poppy. Red velvet-red,

how I wish you red. Red without black,
red without headstones
despite the almost-dead.

His shoulders suspended mid-air,
he reaches for the skittish goat
that bolts to and away

from his grip. I am thirteen just this once
as he holds the body still
alive in his arms. Hills ripple

waves around his legs & again
I am shoving open
the car door, walking slowly

into a salmon-streaked dawn, marching back to an island
home that I should leave. I am returning
to my father

the way petals return to branches
in a world of forever-spring
& although I am far, too

far down to watch, I can see by how
his eyes close that he’s reaching to hold
what’s both here & gone.

You and I looked all day for starfish, but the sea held no starfish, only
stars. Not even a seashell. Not a flash of fish. A girl and boy surfaced
from the water, we’ll help find them they said. But you live
on land, I replied. Though their house was part water: a clapboard shack
on stilts. The boy jumped on your back and the girl clung
to my hair like a horse’s dark mane. They rode on our backs like horses in
the surf, as we swam farther out; the sea floor gray and cratered
as the moon. I wondered if we were on the moon, because
their grandmother floated by in a hollowed-out tree-stump, because still we
saw no starfish. Soon, the children kept saying. Maybe we’d asked wrongly
and requested fish, not stars. By then, the sun was setting.
You and I were tired. We’d fought the whole vacation. Over breakfast
I’d begged you to say you loved me. By now, the stars in our eyes were fading.
Maybe we were asking the impossible. But we kept searching. Finally,
with the children heavy on our backs, we were about to call it quits. It was almost
morning. Then the boy let go of you and disappeared
into the water. For a moment we panicked. Then, he resurfaced, holding
a nuclear-orange starfish large as his head. Don’t you see! he said.
They were always everywhere. We looked down and saw them: limp Dalís
on sand-shelves. They lit our way as if it was day. They were brighter
than light, though there was no light or stars. I had to hold it with both hands; it
weighed as much as the girl. By now, the sea lapped at our chins. It glows
if you touch it, she said, and eats what it wants. By now the sun was down.
The boy put his face in the water and drank the stars. You and I floated, holding
our chunks of light. Almost collapsing under the weight
of our bright and heavy innocence. 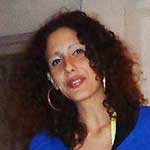 Maria Nazos’s poetry, translations, and essays are published in the New Yorker, Cherry Tree, Birmingham Review, North American Review, Denver Quarterly, and Mid-American Review. She is the author of A Hymn That Meanders (Wising Up Press, 2011) and the chapbook Still Life (Dancing Girl Press, 2016). Maria has received scholarships and fellowships from the Sewanee Writers’ Conference, the University of Nebraska, where she received her PhD in creative writing, and the Vermont Studio Center. She lives with two crazy cats and a patient husband in Lincoln, Nebraska.