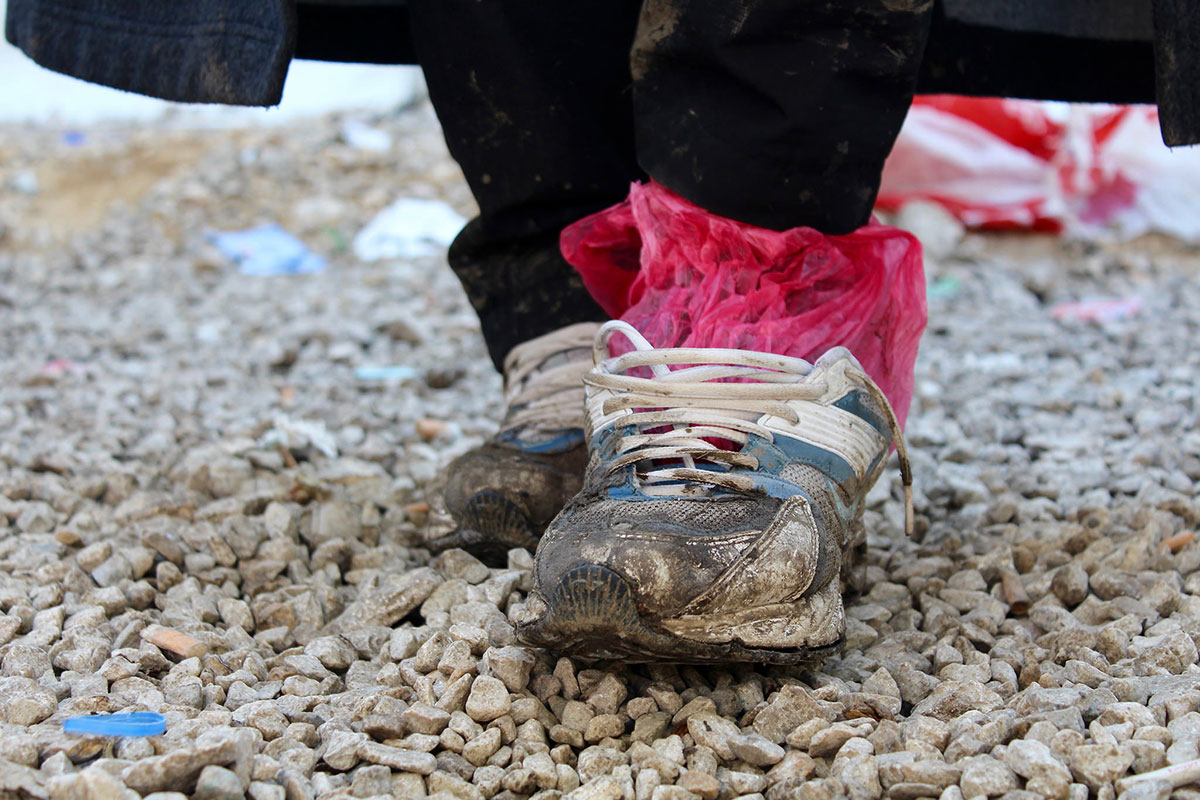 A refugee’s shoes are worn, wet, and muddy after a long journey. These shoes are owned by Ali, a Yazidi refugee who traveled from Iraq to Preševo, Serbia, to avoid persecution (photo by Meabh Smith / Trócaire).

The war-torn Syria in Najib George Awad’s poetry is a country of many cultures and fates. A Christian Syrian from the port city of Lattakia, Awad has Syriac-Aramaic roots and is a prolific poet who embraces the multiethnic wealth of the Syrian experience. As a Syrian expatriate, he shares the pain and devastation of the many millions who have been displaced and forced to flee. But as a Christian theologian with a multicultural Syrian background, he brings to Arabic poetry fresh energy and rhythm.

Long Are the Shadows

Long are the shadows of those who lie motionless
under the rubble of Homs:
shattered limbs
like gall in death’s sour mouth,
heads buried beneath the dust
that not long ago was a yard
in which children played with a ball of socks,
and a little girl crouching by the doorstep
drew a red sun with chalk
and beneath it wrote Freedom.

Long are the shadows of the dead
in the city of Homs:
a bullet cuts through the Baba Amr neighborhood, piercing its artery
as people chant, “God is Great!"
A bomb pierces the flesh of al-Hamidiyah and the Old City
as prayers echo, “Jesus, have mercy!”

Long are the shadows of the revolutionaries
stretching down the streets of Homs:
they fill the sidewalks,
feasting on the bread of the open air
like an army of seagulls,
panicking under a sky of mute violence
and above hills of blind wrath.

Long are the moans of the crucified
in the houses of Homs:
their silence, a nail in the mouth,
their fear, a stab in the heart,
but they hope for an open grave
by Sunday’s dawn.

Proud are the foreheads of the free
in Homs, the city of Ibn al-Walid:
Homs rises like a hymn on the dawn’s tongue.
“We’ll rise among the dead
and march toward the celebration of truth
while our dancing feet beat
death with death.”

The dead rose from the dust of their deaths,
carried the tales of the houses that lost their inhabitants,
stepped on the gravestones,
marched in the funeral processions.

The dead rolled a carpet of daylight over hell
and with stubborn smiles
set out on their death journey once again.

The dead lit their resurrection with the embers of their land,
and as the centuries passed through it
the land spread its wings like a blue bird
and soared up into the sky.

The dead shouted out songs
as if they were celebrating their murderers
and they beat down injustice
by dying right in its house.

The dead entered their dark cells,
the smell of their sleep still rising from their sheets,
their snores still lingering on the table.
They woke up death so they could lie down where it had lain
and embrace a homeland
far away from their nearest dreams.

The dead slept,
the shoes of their death still on their feet
because their death journey still shared their pillow.

The dead buried their body parts in this ground to prove
to the ravens that this soil is the womb of their resurrection,
and the sky, filled with their screams,
tells the trees that the dead unraveled
their white scarf of freedom on this land
and left a shoe of blood.

Translations from the Arabic
By Mohammed Kadalah

Najib Awad is a prolific Syrian poet who has published four collections of poetry. His works have appeared in literary magazines throughout the Arab world. A professor of Christian theology, he has also published works on Arab Christians and the Arab Spring.

Mohammed Kadalah has most recently published translations and short prose in Lyrikline and in the anthology Voices of the Arab Spring. Born and raised in Syria, he currently teaches Arabic at the University of Connecticut.