i took the picture, then lost it, somewhere
between the taking & the loading, traffic jams & Vegas

sprawl, the orange
roadwork signs, the brown scenic drive signs
the beige & taupe attraction
signs, follow the switchbacks to the semicircle
of signs throwing a horseshoe shadow against the gray
concrete beyond the ponderosa & piñon
fist-sized kernels, woody green
& brown roses, the Mojave too opens up

the detonation sites at Yucca Flat
Frenchman Flat, the subsidence craters, the playa:

while on the diving platform at the Last Frontier
the man in a T-shirt, the man
with no shirt; the two men underneath playing ping-pong

under calendars with detonation times &
best spots for viewing
& Miss Atomic Bomb! radiating
loveliness instead of deadly atomic particles
award her a ten-pound bag of mushrooms
slather her in mushroom cloud shaving cream

her to-split-a-face-open-mouthed
smile a raze
to disappear into, black hole eerie, the Atomic
Cocktail: one ounce vodka, one ounce brandy
teaspoon of sherry, one ounce brut champagne
true or false, the doom town
mannequins charred & dismembered or
disheveled, merely or pristine, the ones
the blast passed through/by

a little above normal but not in the range of being
harmful, they said, one-twentieth of that
experienced by an X-ray, they said, inconvenient
or primarily of scientific interest
they said, in St. George Utah for example
but who is they

what i always want to know, exactly
these inexplicable theys with glasses, horn-rim/
black-rim/browline/cat-eye/bug-eye/G-man/retro/a pink

a place to find out if something works

Author’s note: This poem, which takes its name from the place that served as a well-positioned vantage point from which to view bomb detonations during the atomic era, was collaged together from a number of sources:
* “50 times bright than the sun”: quotes in this stanza taken from Christopher Klien, “Live from Nevada … It’s an A-Bomb Test!” History.com, Apr. 21, 2017.
* “I never saw a prettier sight; it was like a letter from home or the firm handshake of someone you admire and trust”: words of a columnist, after observing the last of the Ranger shots: Howard Ball, “Downwind from the Bomb,” New York Times, Feb. 9, 1986.
* “i had blood running”: words of a soldier in the trenches at the Nevada Test Site, from Laurence Topham, Alok Jha, and Will Franklin, “Building the Bomb,” The Guardian, Sept. 22, 2015.
* “on the diving platform of the Last Frontier” describes part of an often-reproduced photograph; see, for example, The Daily Mail, Sept. 10, 2016.
* “radiates loveliness” and “ten-pound bag of mushrooms” (the prize Miss Atomic Bomb was awarded by the Pennsylvania Mushroom Growers Association): Matt Blitz, “Miss Atomic Bomb and the Nuclear Glitz of 1950s Las Vegas,” Popular Mechanics, Apr. 26, 2016.
* “a little above normal”: Catherine Caufield, Multiple Exposures: Chronicles of the Radiation Age (University of Chicago Press, 1990), 106–11.

a mirage is
a. an optical phenomenon that can be captured on camera
b. a volcano with fire balls said to erupt in time to music although to me it seemed they just went off whenever
c. in some ways whatever you decide it is

a highway mirage is
a. caused by hot air near the surface of the road and cooler air above it
b. overall worth watching if you happen to be nearby
c. an inferior mirage

why a volcano?
a. because the casino has a Pacific Islands theme and there are volcanos on Pacific Islands
b. no reason is needed whatsoever
c. because of sexual undertones

superior mirages
a. occur when the air below the line of sight is colder than the air above it
b. are common in polar regions
c. were popularized by Conrad Lycosthenes in his compilation of heavenly portents

reactions to this phenomenon have included
a. confusion because it was hard to tell if they were signs from God or the devil
b. inexpressible longings
c. one thing and then its opposite

the Fata Morgana has also been interpreted as
a. fairy castles in the sky
b. people waiting to board a bus
c. what did Wifredo Lam do with this jumble of words?

the following words appear in André Breton’s La Fata Morgana
a. if i were a symbol you would be a fern caught in a fishnet
b. a bow-shot like birds the best-fitted shoes
c. an accordion of white bats 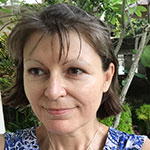 Rose Hunter’s (rosehunterwriting.com) poetry book, glass, was published by Five Islands Press (Australia) in 2017. Journals she has been published in include Cordite, Australian Poetry Journal, Southerly, Los Angeles Review, DIAGRAM, and The Bennington Review. From Australia, she lived in Canada for ten years and is currently a digital nomad (in Puerto Vallarta, Mexico, at the moment). She tweets @BentWindowBooks, a chapbook publisher she founded.