Well-Being over the Phone

How to convey one’s well-being over the phone,
It’s going all right,
All that is there is good or nothing is good.
The main thing to say is, time,
Where does it go, one hardly knows
How the day gets extinguished in the night’s vast ashtray.
This week as well, like a quarry
Disappeared into the jaws of the month
The way months get swallowed by the year’s mouth.
What to say, what things within a human being
Stay hidden, how does one reveal it.
How quickly happiness turns into sorrow,
The way a coin on the palm is suddenly tossed.
For the rest, one wonders what to say while speaking.
Memory is not a pushbutton
That a voice appears the moment you press it,
Still, the work gets done somehow.
To hear someone say something, and that he has
More things to say,
A stir of surprise and joy comes and goes away.
Or someone informs about his tragedy,
For a brief while, he alone appears the hero of our times,
But even the number of such people is dwindling.
Those who want to speak their heart
However much life gets difficult,
And its stories, more devious and complicated
That it is better to tell them on meeting.
Although such devices are to come
That you can see the face while speaking,
So the voice doesn’t fail to know the face,
Nor the face fails to recognize the voice.
And now you don’t have to meet even for grievances,
You can keep notifying them in this manner
So that someday the hearing takes place.
It is possible; one bemoans the lack of love,
You hear a voice from the other end say yes or no.
And why even tell yourself to hold your passion,
Stay silent, or do not utter your desires,
The way the stories of old, or of childhood,
A lot of time is spent recounting them,
So while conversing, people quietly keep the phone down
Because a lot depends on
How long, and from how far, we are speaking,
And the distance that was born from one’s being
In this body and mind.
Will I keep paying for it like this?

Translation from the Hindi

Translator’s note: The poem, ‘फ़ोन पर हालचाल’ (“Phone par Haal-Chaal”), was originally written in Hindi in 1997 and later included in the collection Pratinidhi Kavitayen (Rajkamal Prakashan, 2017). Many thanks to Sujata Jha for pointing me to the original poem. 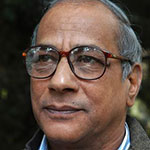 Mangalesh Dabral (May 16, 1948–December 9, 2020) was an acclaimed poet, translator, and Hindi journalist. He was born in a village in the hills of Uttarakhand. He was a recipient of the Sahitya Akademi Award (India’s National Academy of Letters) in 2000 for his collection Ham jo dekhte hain (That we see), published in 1995. He returned the award in 2015, along with others, in protest against the killing of scholar M. M. Kalburgi and the growing atmosphere of violence and intolerance against writers. His other poetry collections include Pahar par lalten (Lantern on the mountains, 1981) and Ghar ka rasta (The way home, 1988), and he wrote a travel diary, Ek bar Iowa (Once Iowa, 1996). His poems have been widely translated and published in all major Indian languages as well as in English, Russian, German, Portuguese, French, Italian, Polish, Spanish, and Bulgarian. Bertolt Brecht, Yannis Ritsos, Ernesto Cardenal, Pablo Neruda, and Zbigniew Herbert are among the major world poets Dabral translated into Hindi. 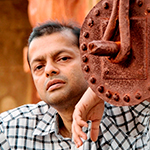 Manash Firaq Bhattacharjee is a poet, writer, translator, and political science scholar. He is the author of The Town Slowly Empties: On Life and Culture during Lockdown (Headpress, 2021), Looking for the Nation: Towards Another Idea of India (Speaking Tiger, 2018), and Ghalib’s Tomb and Other Poems (The London Magazine, 2013). His writings, apart from regular contributions to The Wire, have appeared in the New York Times, Los Angeles Review of Books, Guernica, World Literature Today, The Hindu, The Indian Express, and Outlook, among others.