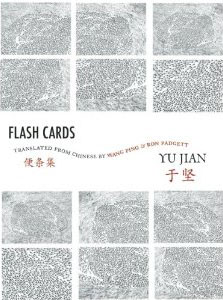 Flash Cards is the first book-length collection of Yu Jian's poetry in English. Writing since the 1970s, Yu Jian is considered a representative of the "Third Generation," a loose group of poets characterized by grounded language and a focus on ordinary lives. The flyleaf calls the work a "primer of modern Chinese life," and many of the poems read as observations drawn from the everyday. From that point of departure, these selections move variously into the surreal, the satirical, the elegiac—while others remain cryptically banal. Western readers will be intrigued by the evocation of China's changing social and environmental realities: the retired women dancing in the park who "all turn their heads" when the poet shouts "mother"; the vanished animals and lakes and streams and meadows; the party doublespeak and thoughtless materialism. The evolutions are sometimes startling, sometimes hilarious, but also sometimes predictable. While Yu Jian's spare language and brevity may evoke the Chinese classical heritage, and the frequent topicality of his work draws attention to China's contemporary challenges, his strongest poems are stripped of national context—such as when the poet waits for inspiration "like mummies / in the desert / waiting for the fingernails / of archaeologists" or factory workers becoming "like disciples / waiting for God / to come out of the furnace." The style of the present volume—drawn from a larger collection called Anthology of Notes—does not reflect the poet's whole oeuvre, which has frequently been more expansive. Many of Yu Jian's earlier works are available in translation online or in journals, and provide a useful complement for any interested reader.

Bilingual editions of poetry allow the reader to go back and forth between the original and the translation, allowing a fuller appreciation of both. The two translators of this volume, both accomplished poets in their own right, have frequently exercised considerable freedom in eliding words or reorganizing ideas. For instance, where one poem reads, in translation, "Daily life / began with an epic ended in tragedy," the original reads, "The tragedy of daily life / beginning with an epic ending in mediocrity." At times, the translation process has created odd effects, such as one poem in which "Tu Fu lies on the operation table / waiting for a sex change," where in the original he awaits an unspecified "excision, once and for all." Whether one sees these introduced resonances as enrichment, alteration, or new creation depends on perspective. Undeniable is that the resulting poems—by turns bizarre, subtle, illuminating—constitute a valuable introduction to this fixture of the Chinese poetry scene.