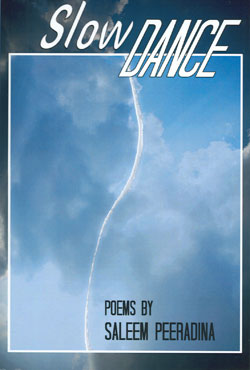 It is uncommon for a young poet to debut with an anthology of contemporary poets who are predominantly older and more established than him. Yet this is what Saleem Peeradina, aged twenty-eight and still unpublished, did with his Contemporary Indian Poetry in English: An Assessment and Selection (1972). A landmark work establishing his reputation as a rigorous critic and craftsman, it is still widely used and cited today.

Forty years and four poetry books later, Peeradina's commitment to high standards of craftsmanship remains strong, as his latest collection clearly and consistently shows. One of the twin pleasures and achievements of Slow Dance is the masterful arrangement of the poems in three sections as well as the ways they—poems as well as sections—relate to one another and to the complex choreography of the book. The other lies in the poems themselves, some of which are among Peeradina's best and, like all genuine poetry, should be read aloud in order to be fully enjoyed and appreciated.

Of the three sections, the first provides a slow and atmospheric start with a sequence of landscapes addressing the fundamental ambiguity and deceptiveness of representation and its objects. The section's centerpiece may be "Reflections on the Other," but most poems in this book offer perceptive interpretations of this key concept of modernity; and they do so in more subtle and imaginative ways than those reflected upon in this keynote poem.

The middle section features six "poems based on the first lines of old Hindi film songs and ghazals." Peeradina grew up listening to and singing these tunes, and although he assures that "readers unfamiliar with the songs or their conventions can read the poems independent of that knowledge," this reader found them generally inferior to the rest, and was left wondering whether the poet's familiarity with his sources did not work against the nature of the experiment rather than in its favor.

Slow Dance reaches its quiet climax in the final, eponymous section, a cadenced meditation whose melodic effect depends as much on the order of the poems as on Peeradina's controlled diction and pitch-perfect versification: "Inches from oblivion / the heart may yet find its moment / to thaw; in a split / second flood its chambers / with blinding sight." Alternately musing and matter-of-fact, witty and grave, blithe and bequeathing, it gathers focus and momentum as it unfolds in a Mahlerian adagio that eventually dissolves in "The Rite Stuff," a sensibly fussy, touching, yet tongue-in-cheek "set of instructions on how to . . . proceed with a no-fuss, no-nonsense funeral." The sad irony of this parting piece is manifest in the effort to provide an illusion of control, if not authority, over something as unpredictable and ungovernable as posthumous fate: "If you absolutely cannot burn me like autumn leaves and twigs / In the backyard or on an open-air pyre on the lake front, load me / On a cheap 2 x 6 plywood pallet, drive me in a pick up / To be dropped off to a designated crematorium site." Yet in the punch-line postscript, the reader learns of an alternative and potentially nullifying document: "Just double check my living will. If it states / That my body should be handed over for medical research, / All foregoing instructions are null and void." (Editorial note: Two poems by Peeradina appeared in the November 2009 issue of WLT.)