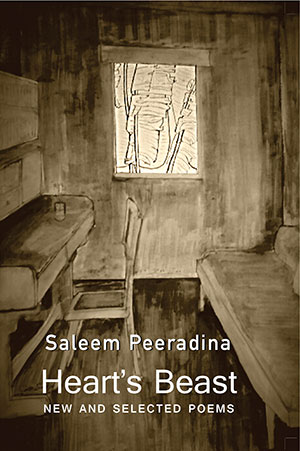 As a publication format, the “new and selected poems” allows a poet’s corpus to grow incrementally and retrospectively at the same time, with each new collection adding a group of recent, uncollected poems to a selection from previous books. It gives poets an opportunity to remain in print, although one offset by the challenge of self-assessment and self-revision.

Despite the title, Saleem Peeradina’s latest collection does not include any new (i.e., unpublished) poems but a comprehensive and sensible selection from his five previous books, featuring half of First Offence (1980), Group Portrait (1992), and Slow Dance (2010), a little less than half of Meditations on Desire (2003), and less than 25 percent of Final Cut (2016). However, since most of these books were published outside of India, the selection is effectively new for the subcontinental readers who represent its intended audience. And it may even help “rectify [its author’s] neglect” in his native country, as Keki Daruwalla advocates in the foreword, or at least reintroduce a poet who is often remembered mostly, and somewhat reductively, in connection with an influential and still relevant anthology.

The militant editor of Contemporary Indian Poetry in English: An Assessment and Selection (1972) would become the angry young man of First Offence, whose free-verse probing pronouncements, charged with an inquisitive energy, lead occasionally to a devotional stance, as with the prayerful endings of “Bandra” (the old Bombay neighborhood), “There Is No God,” and “The Real Thing.” With time, and the experience of relocation to the United States, this poetic stance undergoes a process of sublimation, becoming evocative rather than invocatory. What is called on is not the deity (in its various incarnations) but the dead, or time past (and passing). Thirty years after “Bandra,” “The Old Neighborhood” (from Slow Dance) employs the second person to describe a chance encounter with an old friend rather than to engage the plurality and diversity of the Bombay/Mumbai suburb in a verbal close-up.

While Group Portrait represents the record of a passage (from one world to another, from youth to maturity, from individual to family life, and from free verse to more measured, stanzaic forms), Slow Dance is a reflection on this experience and its many adjustments and reassessments. It is a long and difficult process of self-examination and self-discovery, forged by the daily exercise of “allowing pain / to preserve the distance / which welds our world together” (“Group Portrait”) and leading to an understanding, and acceptance, that “Remaining whole is no longer the point: / It’s staying divided, attaining equipoise” (“Michigan Basement 2”).

As the poet’s view evolves from the panoramic to the personal and the particular, his stance becomes more reflective, his stanzas more composed, and his lines longer. In Final Cut, Peeradina’s camera-eye remains sharp and inquisitive but with a more circumscribed range, focusing on realities that are—metaphorically and literally—closer to home: birds observed in the backyard, objects of everyday use, exotic fruits, and the “early settlers” that, “entering the bloodstream bearing / Gifts from their twin lineages,” will eventually take us down.

Although published in India, Heart’s Beast’s selection will suit and gratify any anglophone reader with more than a passing interest in well-crafted, perceptive, and thought-provoking poetry.