Southern Barbarians and The West: Australian Poems 1989–2009 by John Mateer 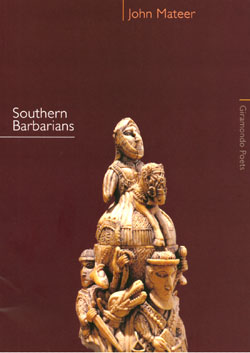 John Mateer represents the most recent reincarnation of the international poet, a post-expat literary explorer, perpetual student, and cultural chameleon (see WLT, Sept. 2011, 24). Born in South Africa, raised there and in Canada, and basing himself out of Australia since 1989, when he turned eighteen years old, Mateer has traveled and published worldwide, and these two books continue his pattern of aesthetic exploration framed within the sociocultural landscapes of his travel.

Southern Barbarians offers an alternate history of the expansion of the Portuguese empire through Africa, America, Asia, and Australia. The Portuguese were nicknamed "southern barbarians" by the Japanese, and their colonial exploits were characterized by their saudade, the traditionally untranslatable variety of melancholy longing they claim. Mateer channels Pessoa from his epigraph ("I write to forget") forward, in his sections "Saudades, The Humanism of Friends," which catalogs friends by name, and in the collection's other five sections. Mateer's poems contain a powerful tandem of intrinsic questioning and relentless curiosity. The former is succinctly exemplified in the last line of his poem "On the Train from Cascais to Lisbon": "Where am I? or, being the poet, Who am I?" He readily incorporates historical detail and bits of Portuguese language in a literary cannibalism reminiscent of the contemporary literary traditions of Portugal's former colonies. In the hands of a lesser poet, these poems could easily end in simple barbarianism—in exploitation or agenda-driven drivel—but Mateer is consummately graceful, that rare foreigner capable of a multilateral empathy, a barbarian in, as Brian Castro writes in his introduction, the word's etymological sense: "one whose language denotes a different mode of speech." He's a medium for the voices of the "perfect nobodies" he praises in poems like "Translators are Angels," "Fadista," and "The Honey-Gatherer."

The West collects twenty years of Mateer's Australian poems—work that directly engages with the poet's chosen home, and especially with its western region. The collection, like Southern Barbarians, exemplifies Mateer's signature perspective, which Martin Harrison calls "regional only as a question of conscious choice, conscious perception." The West is an ideal companion to Southern Barbarians, similar in tone and mode, whether its narrator is reading at the doctor's office ("The Message"), observing alleyway drug deals ("The Drug Scene"), or attending festival readings by aboriginal writers ("To Jack Davis").

Again and again, Mateer transcends categorization; but his work's brilliance extends beyond that resistance, with a fine-tuned, pensive lyricism capable of distilling his curiosity into more than mere probing, and his probing into more than mere intellectual exercise, as in this excerpt from his "Argument" with a lizard, from The West: "Could still have been thinking / our language, my being, is like / a legless lizard, word appendages / defunct in this new terrain, / when on the promontory a metre-long / goanna stopped me. . . . // Its snake-face opened jaws to silence. // I am being told something."

In Mateer's work, so are his readers.