The New York City phone booth libraries featured in WLT's July 2012 Outpost and in this interview with their inventor John Locke are an innovative immersion of books into urban settings, but these kiosk-style libraries are not exclusive to New York. Check out these ten unique micro libraries and community book shares that have brought books to cities, neighborhoods, parks, and even beaches. 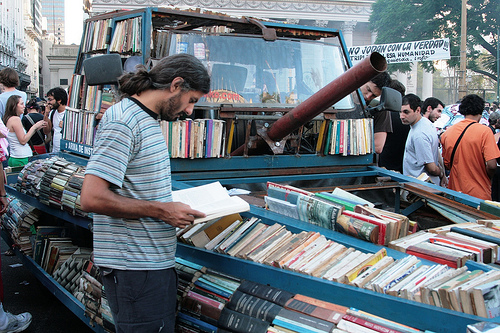 Arma de Instrucción Masiva is an invention of art-car maker Raul Lemesoff. Altering a 1979 Ford Falcon that used to belong to the Argentine armed forces, the book tank is loaded with private donation books that passers-by can pull from the car. The car tours through Argentina's urban capital offering free books to all. sites.google.com/site/armadeinstruccionmasiva/ 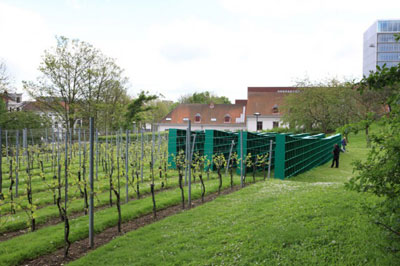 Bookyard is an outdoor art installation and library designed by Italian artist Massimo Bartolini for the Belgian art festival Track: A Contemporary City Conversation. The exhibit will be open in 2012 until September 16, and readers can peruse the bookshelves, select books, and leave a donation of their choosing in a discrete box. Bookyard is located in St. Peter's Abbey Vineyard. http://inhabitat.com 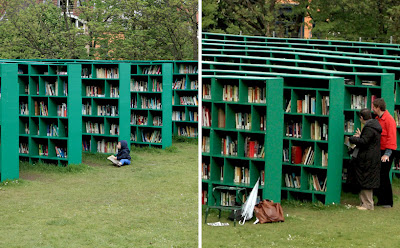 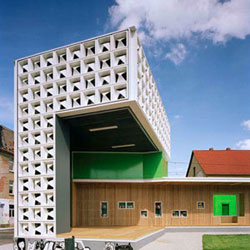 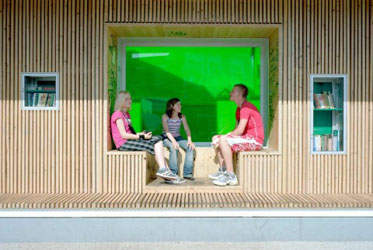 This outdoor library was first established in 2005 by a group named KARO. The group used beer crates for building material as well as wood and materials from an old warehouse for the library portion of the structure. This open air library now offers seating and a comfortable atmosphere for reading. www.gizmodo.com.au 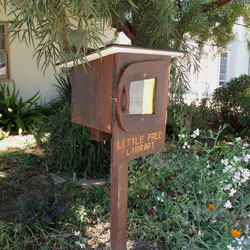 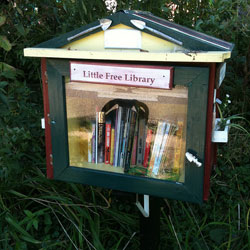 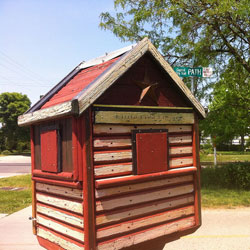 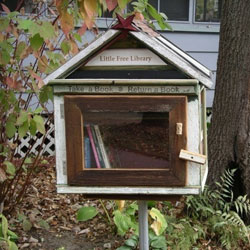 The Little Free Library started as a tribute designed by Todd Bol to remember his mother, a teacher who loved books and encouraged people to read. He built a box, made it waterproof, and filled it with books. It caught on in his community in Hudson, Wisconsin, and from there the idea sprouted into a now international community book-sharing project. Little Free Libraries can be found in over 20 countries, and in hundreds of colors, shapes and sizes. www.littlefreelibrary.org 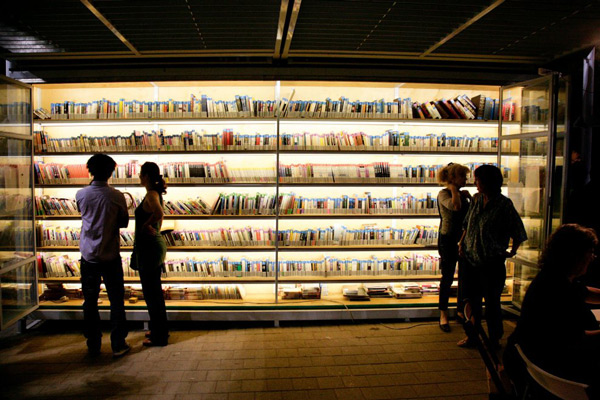 A collaboration between Arteam and Yoav Meiri Architects, the Levinski Garden Library is a social-artistic urban community project. The library has no walls or doors, and book shelves are transparent and illuminated from within causing the books to glow in the park at night. The library contains approximately 3,500 books in 14 languages. www.designingfortomorrow.org Phone box libraries have been popping up in the UK since around 2009. Local communities can apply to adopt a kiosk for repurposing as libraries, art installations, showers, and even public toilets. This is just one of many around the UK that has been converted into a library where community members can take, or leave, a book. http://inhabitat.com

7. Libraries in the Park 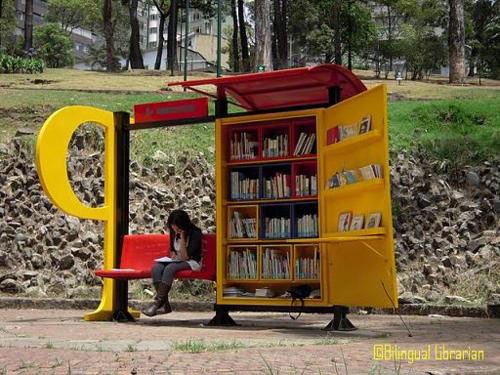 This little library in the park is one of about 47 in various neighborhoods of Bogota, Colombia. They were established by the Paradero Para Libros Para Parques (PPP), a program created to promote literacy across the country. Patrons can check books out, and each stand is staffed by a volunteer for around 12 hours a week. www.bilinguallibrarian.com 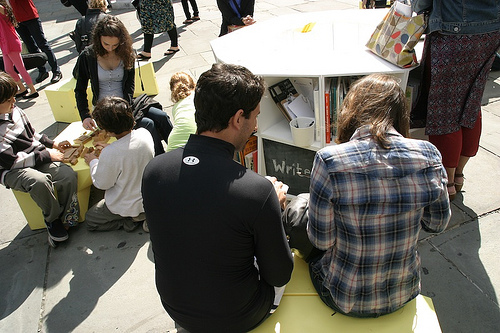 Photo compliments of the Uni Project

The Uni is a project of Street Lab that aims to temporarily transform almost any available urban space into a public reading room and venue for learning. The prototype was initiated in Boston where its creators, Sam and Leslie Davol, were searching out underutilized spaces for the public that could serve their nonprofit's goal of getting books in people's hands.  The Uni is designed to be lightweight so that it can travel easily, going wherever the people are—even if that's halfway around the world. The Uni 2.0 just shipped to Almaty, Kazakhstan this week—it was designed by Howeler + Yoon Architecture in Boston, MA and fabricated by Bill Bancroft Furniture in Brighton, MA. The structure will be used in parks and plazas around Almaty to create a roving, outdoor reading room through a partnership with the U.S. Embassy in Almaty and a local children's library. The Almaty project is funded by the US State Department. www.theuniproject.org 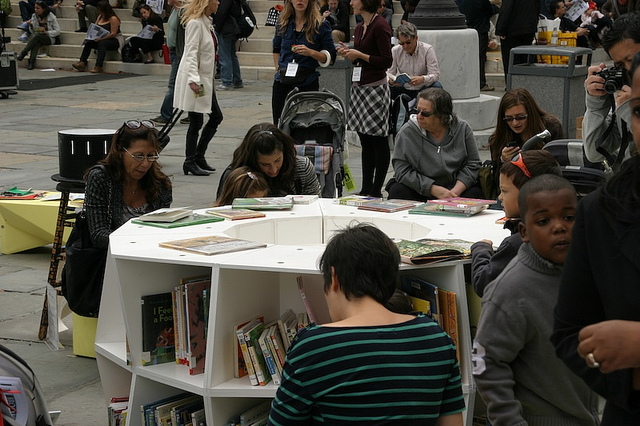 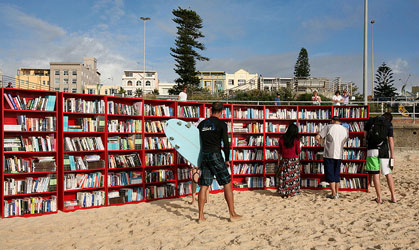 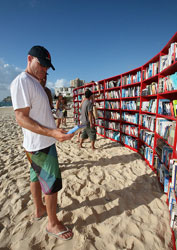 This was a one day affair but nonetheless a clever community library implementation. On Bondi beach—one of Australia's most famous beaches—IKEA set up 30 of their bookcases to offer bookworms thousands of books to swap with one of their own, or offer a gold coin donation that went to The Australian Literacy and Numeracy Foundation. www.dailymail.co.uk 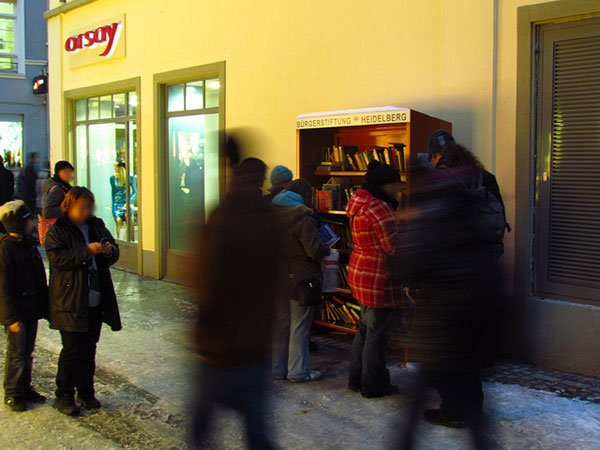 Spread throughout Germany, these bookshelves function as free-for-all libraries financed by donation and cared for by local volunteer groups. Each shelf holds around 200 books and it takes about six weeks for a complete turnover. http://news.yahoo.com

Now it's your turn. Have a unique micro library near you? Use the form below to submit a photo and description. We'll post a gallery later in July.