The Barbarian Nurseries by Héctor Tobar 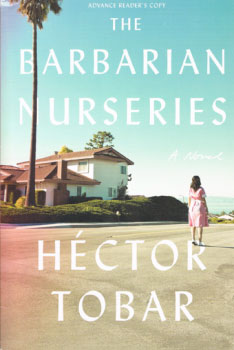 The Barbarian Nurseries is the Great American Novel for our “messy and complicated present.” The Torres-Thompson household lives in a fabulous hilltop home with an ocean view on Paseo Linda Bonita in Laguna Rancho Estates in Orange County, California. Scott, a programmer who lives in the shadow of his own faded glory as a start-up wizard, has invested very badly. Maureen is a creative and driven mother who spares no expense in providing for her children and outfitting her home. Their three children have every imaginable book, toy, game, and advantage. Araceli, the aloof housekeeper and cook who has worked for the family for four years and lives in the guesthouse, is thrust into serving as nanny when Scott dismisses the other Mexican employees because of finances.

The novel revolves around three events. First, the installation of an elaborate garden emblematizes the excesses of affluence and is the catalyst for a brutal argument between Scott and Maureen. Next, the couple’s separate clandestine flights during the Fourth of July weekend (Scott to a coworker’s apartment, Maureen with the baby to a spa in the high desert) leave behind the boys and Araceli, who eventually undertake a forty-eight-hour quest for the boys’ grandfather on public transportation to Los Angeles. Finally, a media and law-enforcement circus ensues as both Araceli and the Torres-Thompsons attempt to come to terms privately with the repercussions of their respective missteps and the public expectations that have been placed upon them.

A vast cast of minor characters contributes to the novel’s impressive sprawl. From a twenty-something Chicano studies enthusiast and other committed pro-immigrant activists, angry anti-immigrant protesters, the unctuous Mexican consul in Santa Ana, and a famous Mexico City talk-show host to the players in the criminal-justice system who are motivated variously by hidden agendas, pseudo-psychological misconceptions, or genuine altruism—Tobar not only further showcases his deep understanding of southern California but also either critiques or pokes good-natured fun at the human comedy.

Language also assumes an important role. The “odd, bilingual concoction” of the Torres-Thompson surname, the Mexican grandfather’s refusal to speak Spanish, the indocumentada who does not speak Spanish very well, and the Spanish left untranslated all highlight linguistic complexities in a multicultural society. The double meaning in the title is especially pointed: nurseries refers to both gardening and childcare, two jobs typically done by Latino immigrants in southern California. Above all, Tobar creates a poetic refrain by repeating “Lupe, María, and Soledad” when he assumes his authorial voice to address the broader social, economic, and interpersonal issues regarding the Latin American women who cook, clean, and care for children.

At once quintessentially southern Californian and wholly universal, and with a kaleidoscopic attention to cultural detail reminiscent of Culture Clash and of Jonathan Franzen, The Barbarian Nurseries calls to mind other novels that take on contemporary society with such powerful sweep, most notably Tortilla Curtain but also Bonfire of the Vanities, Grapes of Wrath, and even Don Quixote.