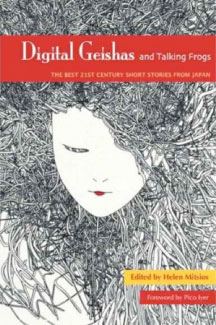 In 1991 the gods of publishing granted fiction lovers a boon: two anthologies of newly translated contemporary Japanese fiction—Alfred Birnbaum’s Monkey Brain Sushi and Helen Mitsios’s New Japanese Voices. Now Mitsios returns with a second collection: cause for celebration, immediate ordering, immersion in these thirteen worlds of Story, and then . . . unease.

Upon reading these stories, two things struck me. First, their exceptional level of craft. As short fiction, they are as well wrought as any I’ve read in years. Second, their despair. In Noboru Tsujihara’s “My Slightly Crooked Brooch,” we experience the repressed despair of Mizue, whose husband, Ryō, casually informs her of a yearlong affair with a college student he now wants to live with during her last month in Tokyo. In Masahiko Shimada’s “The Diary of a Mummy,” we feel the dejection in its day-by-day account of an anonymous man who seeks to “reverse the insignificance of [his] life” by starving himself to death.

This despair seems born of anonymity and aimlessness. Each of the young men and women who, in Tomoyuki Hoshino’s story, form “The No Fathers Club” (“We admitted only those whose fathers truly didn’t exist in this world . . .”) is not merely filling a family void: they’re trying to create a self. Devoid of passion, raised “in aimless plenty,” their days “[overflowing] with leisure,” they can connect only through shared artifice: “The idea was to pretend we really had fathers every second of every day, leaving no room for sharing feelings.”

Even the gangs of unemployed youth in Ira Ishida’s “Ikebukuro West Gate Park” spend most of their time on a bench, “[j]ust sitting there idly, waiting for something to happen. There’s nothing for us to do today, and no plans for tomorrow either.” It takes the depredations of a serial killer to give them a purpose, however transient, a shared effort that ends in tragedy.

This pervasive tonality differs strikingly from that of the 1991 anthologies. But then, the authors in those collections wrote mainly during Japan’s boom times; the writers in Digital Geishas saw the energy and growth of that period end in collapse. During the ensuing “lost decade” of the 1990s, Japan’s long quest for national identity turned inward, personal. Cultural and socioeconomic forces fragmented families and widened generational gaps into chasms. Japanese youth, especially, responded either by rejecting the search for self altogether and becoming hikikomori (withdrawn youth) of Michael Zielenziger’s Shutting Out the Sun (2006) or by seeking identity in one of the consumer or religious mono-subcultures of Karl Taro Greenfeld’s Speed Tribes (1994).

And so the depressive young woman in Hitomi Kanehara’s “Delilah” can find momentary surcease only in anonymous sex. The protagonist in Yoko Tawada’s “To Khabarovsky” suffers a nightmare of identity mutilation and bodily metamorphosis. The collection officer in Haruki Murakami’s “Super-Frog Saves Tokyo,” who returns home one day to find a six-foot-tall talking frog awaiting him, is chosen to help save Tokyo from an impending earthquake precisely because he is a total nonentity: “I’m . . . [l]ess than ordinary. . . . I don’t have a single person who likes me, either at work or in my private life. . . . I don’t know why I’m even living.”

In these and other personalized glimpses of a society in distress, Digital Geishas vivifies the anguish of a culture of the East that seems to eerily anticipate the future of the West.