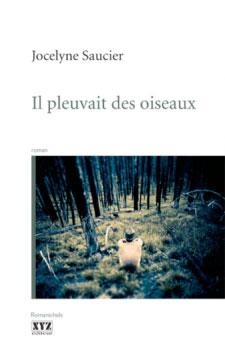 In the early decades of the twentieth century, a number of devastating forest fires swept through northern Ontario, leaving behind a lasting legacy of loss, legislation, and legend. Alone or together, the Great Porcupine Fire (1911), the Great Matheson Fire (1916), and the Great Fire of Hayleybury (1922) would provide perfect material for a compelling work of natural-disaster fiction or creative nonfiction. Instead, Il pleuvait des oiseaux, Jocelyne Saucier’s fourth and most accomplished novel to date, uses the great fires as a meta-historical device to deliver a sleek modern parable on freedom and survival through reciprocity and interdependence.

Like Saucier’s previous novels, Il pleuvait des oiseaux employs an unnamed, middle-aged, female protagonist in a first- and third-person narrative mode. But unlike the teacher of the candidly disturbing La vie comme une image (1996; Eng. House of Sighs, 2001), or the journalist of Jeanne sur les routes (2006; Eng. Jeanne’s Road, 2010), the photographer whose quest shapes the current story finds herself part of a nascent family of sorts, rather than retracing the dissolution of her own. In fact, all we learn about her past concerns her photography (which she practices “à l’ancienne,” with a large-format bellows camera mounted on a tripod), and particularly her recent decision to switch from natural subjects to close-up portraits of survivors of the great fires. It is a race against time and its palliatives (oblivion, memory, and fabrication), and by the time she locates her last and most elusive subject—the legendary Boychuck, the “boy who wandered among the smoking rubble of the Matheson Fire”—he has just passed away. “Died of his own death,” declare half-proudly, half-defensively Charlie and Tom, the two octogenarians who share Boychuck’s hermitage in the woods and its odd support system (Steve, the unlikely manager of a nearby dilapidated hotel, and Bruno, who visits them periodically to tend his marijuana plantation and bring supplies and company to the old men).

With the departure of Boychuck and the arrival of not one but two women (the other being Bruno’s aunt, Marie-Desneige, an eighty-two-year-old escapee from the mental hospital to which she was unjustly committed at age sixteen), the original masculine hideaway ripens into a peculiar utopia of pragmatically interdependent, reciprocally caring relationships, and, most tenderly, mature love. Although short-lived, the “little lake community” will last long enough for its members to attain the highest form of freedom: the freedom to survive their own selves, to start a new life, and to choose the way they want to live it, if not also end it (a tiny bottle of strychnine, carefully preserved in each cabin, acts as a constant reminder of this). It will last long enough for the photographer to complete her own project—not, as originally planned, by interviewing and photographing the legendary Boychuck, but by analyzing and deciphering, with the help of Marie-Desneige, his lifelong nightmares, as he painstakingly and obsessively depicted them in the hundreds of paintings found after his death.

Winner of the 2011 Prix des Cinq continents de la Francophonie, Il pleuvait des oiseaux is a fresh and elegant reminder of Canada’s—and Quebec’s—unique role in forging literary fiction that smartly combines North American land- and mindscapes with European storytelling traditions and styles. (Editorial note: Il pleuvait des oiseaux will be available in English translation from Coach House Books as And the Birds Rained Down in October 2012.)