After the Apocalypse by Maureen F. McHugh 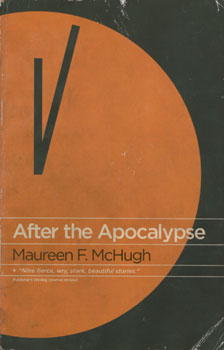 Look on the back cover of Maureen F. McHugh’s new collection of stories, After the Apocalypse, and you’ll find a list of places she’s lived—New York; Shijiazhuang, China; Ohio; Austin, Texas; and Los Angeles—and a list of alternative-reality games she’s worked on: Halo 2, The Watchmen, and Nine Inch Nails. These are important things to know because McHugh (author of the Story Prize–finalist Mothers and Other Monsters) uses the brickwork of her experiences—that tired adage write what you know comes to mind—to explore the unknowns of living in a postapocalyptic society, creating a world in which zombie-infested cities become prisons and people can fly.

In the opening story, “The Naturalist,” McHugh focuses on Cahill, a criminal serving his sentence in a city of zombies. After his community of criminals dies in an explosion, Cahill decides to forgo joining the surviving men in order to live on his own. At first he’s terrified of zombies, but that terror gives way to curiosity until Cahill becomes a postapocalyptic version of Dian Fossey. Cahill lists the things he wants to know about zombies: “Do they eat animals? / How do they sense people? / How many are there? / Do they eventually die? fall apart? use up their energy?”

To conduct his research, Cahill creates large bonfires that attract zombies and watches them until the final embers of the fires burn out. Eventually, Cahill begins to trap fellow criminals in order to feed the zombies and watch their reactions. McHugh, in writing about criminals and zombies, does an unexpected thing: she manages to make the zombies a sympathetic creature. After he’s brought back to civilization and told that the zombies are going to be bombed into extinction, Cahill disagrees with the plan. “[They’re] just   . . . like animals,” he says to reporters. “They’re just doing what’s in their nature to be doing.”

In another story, “Special Economics,” McHugh uses her time in China to write about the economic dependence people have on businesses. Jieling, a girl from northern China trying to earn a living in Shenzhen, accepts a job at a manufacturing company. The company provides food, shelter, and uniforms, but at a price that makes sure their employees are in constant debt to the company. One of McHugh’s talents is to effortlessly create an unbelievable-yet-close-to-reality world in which cell phones are made from plastic sheets dropped in boiling water and households are powered by bio-batteries (boxes containing symbiotic bacteria that convert trash into electricity).

With “literary” writers dabbling in genre—Cormac McCarthy’s The Road and Kazuo Ishiguro’s Never Let Me Go are recent popular examples—it’s easy for critics and scholars to assume that genre is a ghetto where you get your cheap goods. But to snobbishly ignore exciting writers like Maureen McHugh is their loss.