The Life of Rebecca Jones 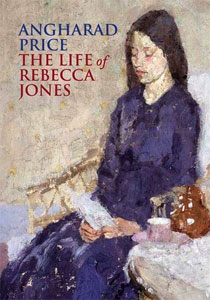 Welsh author Angharad Price offers us a welcome respite from our frenzied twenty-first-century lives in her absorbing recent novel, The Life of Rebecca Jones (2012), a fictionalized account of Price’s great aunt who was born in 1905 in rural Maesglasau Valley in Wales. Although the book is properly classified as a novel, it contains an accurate history of the Jones family, along with striking personal photographs of family members and the surrounding countryside. These elements alone would recommend the book as worthwhile reading, but Price’s lyrical prose breathes an almost magical life into the narrative. Her descriptions are so artistically rendered that I was transported in time and place as I read. Instead of hearing the constant beeping and buzzing that makes up the background noise of modern life, I heard “the echo of wheel and hoof on road” and “the valley’s stream as it whispers past.”

According to local records, Price’s family has farmed in the cwm (valley) since the year 1012. Such a history gives a deep sense of place and belonging that is rare in our displaced and atomized society. The mountains, streams, and valleys are as much a part of Rebecca Jones as is her family. “What is a family? An anchor which holds us in place. It holds us secure in a storm. It holds us back in fair weather. It is a blessing and a burden—for the young, especially, and for those who seek freedom.” Like all families, this one has its share of tragedy and disappointment. Not all the children survived, and those who did often had to deal with heartbreaking events. And, as in the rest of the world, the inevitable changes of the new century brought both blessings and burdens.

Lloyd Jones has crafted a moving and poetic translation of the original O! Tyn y Gorchudd (2002; O! Pull aside the veil). The local place-names give a hint to the beauty and magic of the Welsh language: Cwm Maeslasau, Tynybraich, Dinas Mawddwy, Merioneth, Cadair Idris. These names seem to touch on fantasy and bring to mind Tolkien’s Middle Earth. But unlike Elvish, Welsh is very much a living, breathing language. After a number of years of decline it has undergone a remarkable resurgence. Since 2000, the teaching of Welsh has been compulsory in all schools in Wales up to the age of sixteen. On February 9, 2011, the Welsh language was officially recognized within Wales.