A Brief Conversation with Anna Winger 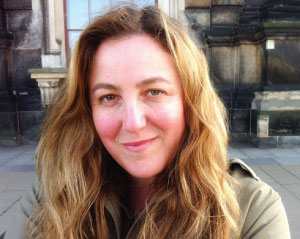 Anna Winger was raised in Kenya, Massachusetts, and Mexico. She is the author of the novel This Must Be the Place (Riverhead, 2008) and the creator of Berlin Stories, a radio show for NPR Worldwide (berlinstories.org). She lives in Berlin with her family.

Anna Winger: I was living in New York and my husband was living in Cologne. We wanted to live together, and Berlin somehow felt like a place in the middle. We knew almost nothing about the city when we moved here in 2002, so we got lucky.

WLT: What is your favorite Berlin novel?

AW: There are many wonderful German novels that take place in Berlin, old and new. Start with The Wall Jumper by Peter Schneider or Visitation by Jenny Erpenbeck. Both are available in English translation.

WLT: When a friend visits you, what is the best tip you offer for really getting to know the city? Walking?

AW: Ride the S-bahn from west to east and back again, and see all the layers of history at once, from above. Berlin isn’t compact like, say, central Paris or Manhattan. And its complicated history is built into its geography, which can be hard to grasp on ground level. Although individual neighborhoods are walkable, I do think the best way to get acquainted with the whole story of Berlin is by wandering around the city on the elevated trains. And you come into contact with a whole cross section of the population on public transport.

AW: There are readings, lectures, and literary festivals, open mikes and poetry slams all over the place—from Neukölln bars to the American Academy to Soho House. Fiona McLellen, a local British writer, compiles a monthly newsletter of literary events. But of course I think the hottest literary spot in town is at berlinstories.org. We are the only city outside the United States that has a local NPR station (104.1 FM), and our series, Berlin Stories, a collection of personal tales of the city by writers from around the world, has been running on it since 2009.

WLT: How are independent bookstores faring in Berlin?

AW: There are a lot of independent bookstores. Most carry German books only and/or art books. I’m not sure how they do financially, but I’m impressed that so many are still afloat in the age of Amazon.

WLT: Of those German writers yet to be published in English, who do you think most urgently needs to be made available in translation?

AW: Tilman Rammstedt is definitely one.

WLT: What new projects are you working on?

AW: I am writing a new novel now that takes place far from Berlin, in Mexico, where I lived growing up. Also, we are expanding our NPR project to a monthly one-hour broadcast, the Berlin Stories Magazine show. It will have the same intimate take on the city as our short Berlin Stories pieces, but the extra time allows us to branch out into interviews and reportage, too. I am hosting it with travel writer Gisela Williams.

(Editorial Note: The map below displays Winger's favorite spots in and around the neighborhood of Tempelhof. "The nice thing about living in this colorful slice of English-style row houses from the 1920s by Platz der Luftbrücke, is that it still has many of the kind of Mom & Pop businesses that make a neighborhood feel like, well, a neighborhood.")