An Arab Melancholia by Abdellah Taïa 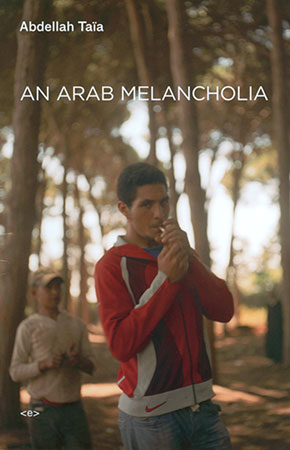 Abdellah Taïa’s Une mélancolie arabe was published in 2008 in Paris, where he now lives. It is in many ways a continuation of his early autobiographical texts, lyrically chronicling his experiences as a gay man—which can be a predicament, to put it mildly, in his native Morocco, where homosexuality is still a crime, punishable by up to three years in jail. As in his previous fictional works—Mon Maroc (2000), Le rouge du tarbouche (2004), and L’armée du salut (2006)—Taïa’s narrator is a sensitive and gifted young man from a poor Moroccan family, fascinated by music and cinema, and seeking to express himself through his writing. Vulnerable and often victimized, he is frequently attracted to stronger men who tend to use him and move on. His short stories and novels are also characterized by constant movement, changes, and travels, reflecting Taïa’s trips to Switzerland and France to study and write, to Egypt to work on a film, and back to Morocco to visit his family.

This short novel (141 pages) of self-discovery is divided into four parts: “I Remember,” “I’m Going There,” “Running Away,” and “Writing.” In each part, the narrator, at one stage of his life, is running—figuratively or literally—sometimes away from, sometimes toward something or someone, be it a danger, an aspiration, or a lover. Each part also involves the narrator’s brush with self-destruction or death, followed by something resembling a renewal or resurrection. Taïa’s sentences are generally short, with an often-bemused, detached tone that nevertheless conveys nostalgic longing for the vanished world of his youth, in spite of its obvious brutality. In the first part of the novel, the very young (not quite thirteen-year-old) narrator, once again named Abdellah, is drawn to an older and tougher teenager, Ali, who turns out to be not just an ordinary bully but a thug who calls in his friends to gang-rape Abdellah. This sordid moment is suspended in grotesquely comic fashion when the would-be rapists are interrupted first by the muezzin’s loud, melodious call to prayer, then by Ali’s mother, who wants him to run an errand: “You have to go to the store. . . . We’re out of donuts and it’s almost snack time.”

The three other parts of the novel are less shocking or contrasted, but they follow the initial pattern of the narrator’s swift movement, sudden fall, and resurgence. Compared to Taïa’s previous autobiographical texts, An Arab Melancholia is somewhat more innovative in terms of narrative structure but covers similar thematic terrain. The author broke new ground with Le jour du Roi (2010; see WLT, March 2011, 68).