A Country for Dying by Abdellah Taïa 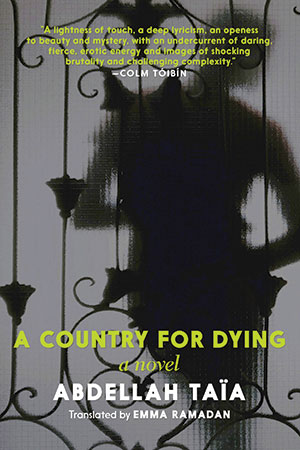 A POCKETABLE, one-sitting read, Abdellah Taïa’s A Country for Dying is an engrossing transcontinental and transgenerational fable sweeping from coastal Morocco to northern France over the course of five decades (see WLT, Sept. 2013, 45). With terse, biting prose beautifully translated from French by Emma Ramadan, it is a startlingly topical and succinct examination of race, relocation, isolation, and identity.

Sharply framed by the inscrutable family history of Zahira, a Moroccan immigrant in Paris, and her father’s sister, believed to have vanished in the 1950s, the narrative slaloms between characters, each coming to terms with the trajectories their lives have taken. Zannouba, a transgender sex worker on the cusp of surgical transition, idolizes Zahira’s effortless womanhood and grapples with letting go of her own lived experience in a male body; Mojtaba, a gay media correspondent, flees his native Iran, having been targeted publicly as a political revolutionary; Allal, Zahira’s childhood suitor, sets out for France to settle a score.

One of the only openly gay Moroccan writers on record, Abdellah Taïa is, quite literally, the voice of a generation. Adroitly exploring amorphous, transmogrifying identities and the intrapersonal immigration between past and present selves in striking stream-of-consciousness, Taïa proves to us, as readers of this work, that there is credit in writing what you know (Taïa himself relocated to Paris from Morocco in the late 1990s).

Originally published in French in 2015, A Country for Dying—here in its first English translation—emerges in an ethically and politically tumultuous 2020 as a salient means of analyzing the American sociopolitical climate against a global rubric. As we learn and unlearn and acknowledge and face head-on the ghosts of our past, we discover—alongside Zahira and Zannouba and Mojtaba and Allal—that our individual histories are furtive, insidious; they sink their teeth in deep and claw their way toward reckoning, whether we are ready to go there or not.