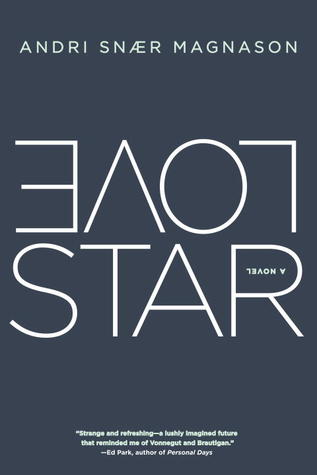 Ovar LoveStar is the seventy-one-year-old chairman of a vast corporate entity whose tendrils infiltrate every aspect of life. In Andri Magnason’s stinging satire, LoveStar, who has “had a greater influence on the world than any other man in history,” is also demonic capitalism incarnate. And he is insane.

Like many of his real-world counterparts but more ingeniously, LoveStar has found a way to avoid responsibility for the consequences of his actions. He is, he claims, a man possessed. By ideas. “The ideas took over his body and used him as a host to launch themselves into the world. . . . He had no control over the consequences when an idea took up residence in his head.” With Nietzschean hubris, LoveStar writes: “The man is not responsible because he does not own the idea. . . . Someone who is possessed by an idea is beyond good and evil.”

LoveStar seeks “to free people from the oppression of freedom.” To this end, he and his minions have created a society of wholly invasive information gathering and of technological control mechanisms that have assumed dominion over citizens’ bodies, speech centers, “primitive biological and emotional reflexes,” free will, and initiative. Their agenda? The ultimate goal of modern capitalism and advertising: to reduce citizens to infinitely pliable, robotic consumers.

Unsurprisingly, attaining this goal has wrought collateral damage. Among the casualties: privacy, trust, individuality, parental responsibility, even the freedom to choose one’s mate. The latter chore is now performed by inLOVE, a computer that calculates “exactly which two people are suited to one another.” No one protests: “It was scientifically proven and no one argued with inLOVE any longer.” Those who defy inLOVE’s decisions are beset by offshoots of LoveStar’s empire, which dominate with the iron fist of bureaucracy.

Like all great villains, LoveStar commands our attention. The novel opens with him on a plane over the Atlantic, carrying a seed. “If anything happened to the seed all hope would be lost. Of course he didn’t know that all hope was lost anyway. He would be dead within four hours.” Magnason immediately limns the nightmarish society LoveStar has created. Then, for the next three hundred pages, he elaborates, extrapolates, and exaggerates his premise and its primary metaphor (idea as disease). By the time he reveals the secrets of LoveDeath (another of LoveStar’s parasitic ideas), the real reason for the Million Star Festival (“a hundred million bodies would burn up in the atmosphere, illuminating the darkness like stardust in the spectacle of the century”), the monstrous plan of his out-of-control employee Ragnar Ö. Karlsson, and the nature of the seed LoveStar carries, his satire attains Swiftian proportions.

Upon publication in Magnason’s native Iceland, LoveStar received the DV Cultural Prize for Literature and was nominated for Iceland’s top literary prize, an honor won by his children’s book, The Story of the Blue Planet (2012). While nature and the culture of Iceland enrich LoveStar, its concerns and targets are universal, its beleaguered, hapless citizen-pawns recognizable as our future selves. The imaginative power of novels like LoveStar may serve as a wake-up call, if only we read and heed them.