On Time and Water by Andri Snær Magnason 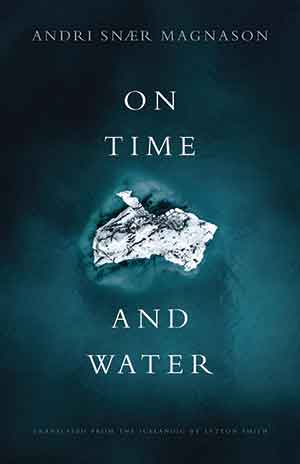 ANDRI SNÆR MAGNASON’S On Time and Water is a wondrous, rambling book. It confronts the ecological and social challenges facing humanity and eloquently presents facts that are dire and terrifying. And yet, through persuasive narratives and insightful examples, the book is satisfying, useful, and even hopeful to a degree. I highly recommend Magnason’s On Time and Water to readers of nonfiction, especially those interested in ecology and eco-theory.

Writing about the incredible rate of change in technology, population, resource use, and climate change, Magnason demonstrates how profound the present moment is. To comprehend the enormity of the problems facing us, Magnason admits that he must write about them in the way that astronomers search for black holes: looking “past it, to the side, below it” as it warps space and time. Understanding climate change requires many kinds of language: scientific reports, personal stories, and mythologies old and new; therefore, On Time and Water is a collection of family stories, memoir, travelogue; it is a collection of semi-independent essays enclosed by two interviews with the Dalai  Lama; it is a dirge for most of the Earth’s glaciers. From these diverse threads emerge the themes that make On Time and Water particularly insightful.

A central theme of On Time and Water is the expansive influence that every living person has across time. Between watching old home movies with several generations of his family, Magnason poses a set of math challenges to his ten-year-old daughter, Hulda, like these: In what year will she be the same age as her namesake great-grandmother is now? And, if Hulda’s life resembles her grandmother’s, in what year would her great-grandaughter be ten? She solves these equations and is amazed by the implications behind them: she may know and love someone who could live to see the year 2186! “Your time,” Magnason tells her, “is the time of all the people you know and love . . . and also the time of the people you will know and love. . . . You can touch two hundred and sixty-two years with your bare hands.”

Now is a critical span of time. While nature is always changing, the rate of change is accelerating more now than it has in literally millions of years of Earth’s history. This is true of our technology, too. No other living generations have had these experiences. Magnason’s own family story, presented in several chapters, is captivating in part because of the individuals themselves (his uncle was a world-renowned reptile expert and biologist, for whom the largest crocodilian species ever discovered was named; one set of grandparents were pioneering mountaineers who charted glaciers with the Icelandic Glaciological Society; another grandparent was a surgeon who operated on both Robert Oppenheimer and the deposed shah of Iran). And so, when he imagines that he is creating the “Andri Magnason Institute,” the name is not exactly in jest, but neither is it vanity. Magnason urges each of us to create an eponymous institute, to preserve our experiences of a passing world and the fading stories of our elders.

Language is key to action. Magnason aptly notes that people easily comprehend linear equations, but scientific measurements like acidity or the Richter scale are logarithmic. To clarify the difference, he creates clear examples between these ways of measuring. Imagine, for example, having to purchase everyday goods using a logarithmic scale: one unit of milk is one liter, but two units is ten liters, not two! Likewise with tipping points. Magnason reminds us that the temperature of ice can change by dozens of degrees with no fundamental change, but one degree—at the freezing point—changes everything all at once. Everything melts.

On Time and Water helps readers conceptualize the state of the world today, which is a critical step toward avoiding the worst of catastrophes. Surmounting the coming challenges will take technology, certainly, but a lot of work through language: communication, compassion, and, sadly, some acceptance. Magnason imagines the place where his grandparents spent their honeymoon, a hut high up on one of Iceland’s most important glaciers, will one day be simply empty air. The glacier where it stands today will have melted away within his daughter’s lifetime.

Even the most neutral, scientific language frames an issue connotatively. When Magnason discovers in his grandfather Arni’s library Helgi Valtýsson’s In Reindeer Country, he is surprised by the sublime, worshipful language Valtýsson used to describe the Icelandic highlands. Magnason believes that no one would have taken him seriously if he used such language in his former book, Dreamland. This shift in writing about nature has a serious consequence: “instead of an area’s untouched quality being taken as proof of its value and significance . . . it was branded as ‘unpopular.’ Nature needed high enough ‘ratings’” to justify its existence. Here and throughout On Time and Water, Magnason exposes and rejects the philosophy that nature is natural capital, useful only for the materials and free services it provides to humanity. The natural capitalism argument is useful (Magnason slips into it when discussing the Himalayan glaciers’ water-storage capacity in a later chapter), but environmental arguments are often captive to this philosophy and reduce our appreciation for Earth to a mere transaction.

Magnason expresses hope in emerging technologies that will be necessary to remove greenhouse gasses from the atmosphere, but he is always clear that technology alone cannot save us. In his second interview with the Dali Lama, His Holiness tells him that the subject most in need of teaching is not engineering but “warm-heartedness”—compassion for all sentient life and respect for the Earth. Writers have a critical role to play in this instruction. While touring for his book Dreamland, Magnason attended a conference in Munich. While there, climate scientist Wolfgang Lucht asked Magnason whether he would write about climate change next, having written with such passion regarding landscape. Magnason suggests the issue is too complex for a layperson. “Can’t [climate scientists] write about their own research?” Magnason asks. “No,” Lucht responds, “because they’re not experts in communication.” To demonstrate this, Magnason quotes a paragraph that describes the change in ocean acidity. The information in those few sentences should fill us with urgency and fear, but the jargon, the logarithmic scale, fails to convey the horror along with the facts. But, as Lucht admonishes, this is no reason to make a handful of scientists responsible for humanity’s global problems. Poets will be required. Magnason’s eloquence is exactly what is called for in this dire moment.