The Green Shore by Natalie Bakopoulos 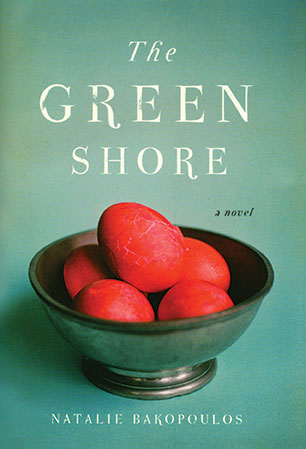 A June 2012 Indie Next pick, this first novel follows six years in the life of an educated middle-class Athenian family, its father long dead, after the 1967 coup. If at first its prose seems workmanlike, its apparent protagonist, the university student Sophie, callow, the novel quickly deepens, through erlebte rede adding the viewpoints of Sophie’s mother, sister, and uncle. As family saga, The Green Shore subtly portrays how the pains and joys of growth and change affect complex relationships. As historical fiction, it powerfully renders the excruciating tension of life under the Colonels, who banned “Western decadence” and freedom of thought. Seamlessly entwined, the two strands reveal much about history, memory, citizenship, diaspora, and the ties that bind family and nation.

Time structures the plot. A prologue describes the coup’s advent, while its four parts, dated April 1967 to December 1973, chart the family’s evolution. Courting danger by distributing dissident literature, Sophie flees to France to avoid arrest. Her brother, Taki, leaves his “backward” country for America. Their youngest and most sheltered sibling, Anna, still at home, begins an affair with Evan, her uncle’s much older, married friend, and becomes a student radical. Their doctor mother, Eleni, maintains simultaneous relationships with a physician somewhat sympathetic to the junta and a dissident history professor with whom she operates an underground clinic to aid torture victims. Eleni’s brother, Michalis, a well-known poet jailed during the Greek civil war, withdraws into his wife’s small suburban cottage until he becomes a prisoner once again.

While foreboding permeates the novel, its protagonists endure no great trauma. Yet inevitably life changes them all. A diasporic “in-between” drawn to French culture but nostalgic for Greece, Sophie matures. Studying comparative literature, forming a relationship with her Greek boyfriend’s cousin, Loukas, by 1973 she is pregnant, dissertating, and ready to go home. Taki fully adapts to America; a married father, he never visits. Anna and Eleni remain under one roof but live separately, Eleni at the hospital or “clinic,” Anna at school, with her radical friends, or trysting with Evan.

Recalling its title, from a Greek poem that lauds the “green shore of our native land,” the novel’s last section celebrates homecoming and life’s transient joys. The junta weakened, Sophie returns with Loukas, Taki brings his family for a Christmas visit, and Eleni invites everyone, including Michalis and his wife, her more-or-less platonic lover Dmitri, and her potential lover and partner-in-dissidence Andreas, to a family feast. As Sophie frantically summons Loukas to the bathroom, Eleni thinks the novel’s final words: “It won’t be long. It won’t be long at all.” But as Greeks today can sadly reaffirm, birth in any form presages struggle.

Lacking stylistic flourish and postmodern conceit, this simply written but haunting novel captures lives caught in history’s web. Its open ending abandons characters of whom we have grown fond to the vagaries of history, just as we shall one day leave our families and nations to their unknowable futures.