The Sarabande of Sara’s Band by Larysa Denysenko 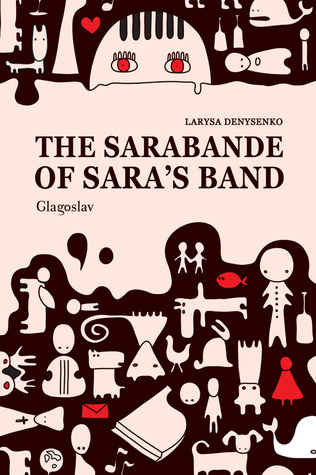 The familiar quotation from Leo Tolstoy’s Anna Karenina, “Happy families are all alike; every unhappy family is unhappy in its own way” reflects a certain truth. However, “happy” or “unhappy” does not even begin to describe the condition of any particular family, certainly not the particular extended family inherited by protagonist Pavlo Dudnyk through his marriage to Sara Polonsky. Indeed, in this case the term “peculiar” might appropriately be substituted for “particular.”

The Sarabande of Sara’s Band begins with a short headnote to the first chapter, “At the very least about a perfect morning, imperfect marriages, former classmates, and a family crypt.” A normal-enough beginning, although the mention of a family crypt may give the reader pause. That pause is warranted. It’s the pause of the slightly eerie silence before a catastrophic storm. The second chapter headnote, “At the very least about someone else’s child, someone else’s husband, someone else’s dog, and the Sarabande for String Orchestra and Piano by G. F. Handel,” catapults the unsuspecting Pavlo into the position of playing host to a wild assortment of colorful relatives amid eyebrow-raising situations.

Sara’s uncle, Gennadiy Stanislavovych Polonsky (known by the unfortunate shortening of his name to the first two letters of each, Gestapo); her precocious piano-playing cousin, Emile; and Terry, the expressive rubber-squeaky-toy-wielding springer spaniel, take up residence in Pavlo’s apartment for the duration of a remodeling project. We are treated to a nonstop, hilarious exchange of dialogue that moves us rapidly through a series of bizarre events. Various interesting visitors arrive to add to the chaos, including a former suitor who is a professional musician both named and shaped like his instrument (the violoncello) and Sara’s ex-husband, who is now a priest. The good Father Makariy brings along his own mattress, preparing for an extended stay. The wordplay is fast and furious, unceasingly witty, and framed by Pavlo’s short but revealing silent observations.

Although the novel is set in contemporary Ukrainian society with the ubiquitous technological trappings of instantaneous communication and information accessibility, we also catch glimpses of old traditions and the collision of Jewish and Christian orthodoxy. The contrast between Sara’s and Pavlo’s families mirrors the contrast between modern and traditional cultures. There is an underlying seriousness to the light banter and shenanigans that anchors the novel to a solid literary foundation.

The Sarabande of Sara’s Band is a magical novel. It propels the reader on a raft of laughter while managing to simultaneously provoke and satisfy.