“Placing Everything on the Line” (Read in Serbian and English)

Placing Everything on the Line

A car stops in the middle of the screen
a gentleman walks out dressed in black, wearing a hat,

desperate, she jumps off the building and all the newspapers
print the news on their front pages

the girl is still dead
outside it is still raining

Translation from the Serbian
By Biljana D. Obradović 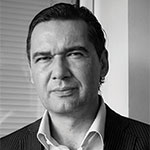 Zvonko Karanović is a poet and fiction writer born in Niš, Serbia. Like the poets of the Beat generation he takes as his models, he has traveled widely throughout Europe, hitchhiking and often changing jobs. He has worked as a journalist, editor, radio host, DJ, concert organizer, and for thirteen years was the owner of a music store. He has published ten collections of poems and a novel trilogy, The Diary of Deserters.