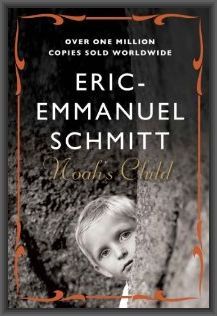 Set in World War II, during the Nazi occupation of Belgium, Noah’s Child recounts the story of Joseph, a ten-year-old child whose Jewish parents have been forced to leave him in an orphanage under the protection of Father Pons, an infinitely benign Catholic priest. The plot charts Joseph’s encounter with the threat of the Holocaust, but his initiation has more to do with the art of mastering subterfuge and ingenuity than with bearing witness to the truly horrific nature of Nazism.

A genre in its own right, the Holocaust seen through the eyes of a child has been graced with a number of powerful novels and films over the last few decades, the most salient of these in the francophone literary field being the groundbreaking autobiographical novel Un sac de billes (1973; Eng. A Bag of Marbles, 1974) written by Joseph Joffo. Schmitt’s novel makes an obvious nod toward Joffo’s work by also calling his narrator Joseph. Although Noah’s Child is competently written, the homage is ultimately poor strategy; Schmitt’s story fails to compare favorably. It never attempts to measure the same breadth of historical realism and, as such, possesses less emotional intensity.

Although Noah’s Child can conceivably be enjoyed by adults (its best-seller status confirms that it can), it seems like the kind of book that would be ideal if one were to introduce a preadolescent to World War II: it hides the horrors even more reassuringly than Roberto Benigni’s Life Is Beautiful while offering a sometimes captivating boy’s-eye view of Nazi occupation. Some of Joseph’s defamiliarizing perceptions are amusingly colorful.

On the whole, however, Father Pons’s surname tends to backfire, reminding one of the French word poncif, the rather tired, hand-me-down generic conventions. The problem lies on the side of what André Gide once said: “Great literature is not achieved through lofty sentiments.” It takes a novelist as inventive as Dickens to give the lie to that. This being said, a number of Schmitt’s other works are stirring and imaginative. Schmitt manages to make a concerted effort to leave most of these “bons sentiments” behind in theatrical works such as L’école du diable (1999; see WLT, Winter 2000, 107) and Le libertin (1997).