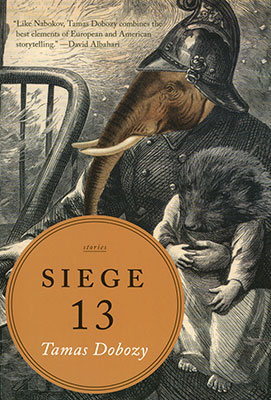 In Tamas Dobozy’s previous book, Last Notes and Other Stories (see WLT Nov. 2006, 55), Hungarian survivors of World War II are judged because they failed “to gaze back in recognition, and use the remorse that gaze should have occasioned against the illusions that comforted and rotted them for the rest of their lives.”

In Siege 13—the siege is that of Budapest by Russian forces in 1944–45, thirteen the number of the stories—one character, speaking for many others, questions whether any of the survivors deserve a future. Even when they might, the collection as a whole allows neither characters nor readers the possibility of escaping the effect of those events or the realization that they are subject to unknowable fate. The events are horrifying enough. Several stories repeat situations in which civilians are used as human shields; bodies are crammed into doorways in Kálmán Square (known as Moscow Square under the communists and until very recently); sewers offer the illusion of the possibility of escape. At least twice, embedded in painstaking and often excruciating descriptions of those horrifying events, flames surface from ruptured gas mains to illuminate the scene, but in every story, whether it deals directly with the siege or is set in Canada decades later, physical or more often psychic undercurrents erupt to break through the characters’ attempts to forget and to reimagine themselves.

Conclusions, if not resolutions, are divided between need of “the passing of trauma from one generation to another” and the recognition that “our responsibility to others sometimes requires us to bury knowledge, even destroy it.”

Of many successful stories in the volume, “The Animals at the Budapest Zoo” deserves to be ranked with major works in the genre. Confined to limited time and space, it foregrounds most effectively the moral and psychological strains imposed by the siege, describing the futile attempts of two surviving zookeepers to keep themselves and the animals alive in spite of deprivation of heat and food, shelling, and impromptu big-game hunts by Russian soldiers. One of the keepers becomes obsessed by ancient tales of metamorphosis, when the concept of the self did not exist, because in the present “having a mind was . . . a handicap.” His friend, asked in effect to feed him to the zoo’s lion so that he can metamorphose into the savage and mindless, hugs himself “as if in consolation for the emptiness of his stomach, for the delirium of this siege without end, the constant fear, the boredom, waiting on the clock, the slow erasure of affection, of the list of things he would not do.”

The rhythm of the series, here and elsewhere one of Dobozy’s most effective stylistic devices, is not only compelling but encapsulates the structure of the story as a whole. And other strong passages, notably some of the concluding paragraphs, show that Dobozy’s style has attained the measured gravity and eloquence worthy of a mature artist. They also offer hope for future work from a writer who has not quite reached his mid-forties.