We, the Children of Cats by Tomoyuki Hoshino 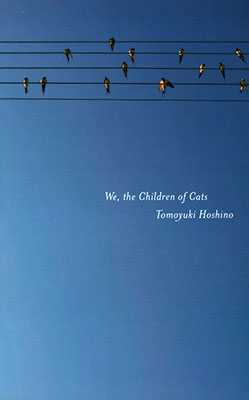 “My wish is for the words in these stories to . . .  lodge themselves within the bodies of all of you.” By thus concluding his introduction to this collection, Tomoyuki Hoshino throws down the gauntlet: reader, you have been warned.

Since the publication of his first novel in 1997, Hoshino has won multiple major awards, culminating in the 2011 Ōe Kenzaburō Literary Award for Ore Ore (2010). Yet only in 2009 was one of his novels published in English, when PM issued Ronrii haatsu kiraa (2004) as Lonely Hearts Killer.

The stories in We, the Children of Cats are more interior, intimate. “Chino” fuses economic globalization with Japan’s crisis of national identity in the character of a young Japanese man who flees to “a small country below Mexico” to eradicate all “Japaneseness” from his being. The title story examines Japan’s predicted steep population decline via the disintegration of an already dysfunctional relationship. Masako’s family press her and her husband, Naru, to start a family, arguing the long-standing tradition that a woman’s primary responsibility is to marry and then bear and raise her husband’s children. But Masako stridently believes in her right to decide whether to ever have children.

Some collections can be equally appreciated regardless of the sequence of reading their contents. Not this one. Read in the order presented, the five short stories teach us how to understand Hoshino’s fictions and prepare us for the three novellas to follow.

In the first story, “Paper Woman,” Hoshino embeds ideas and images he will subsequently develop. The narrator, writer “Tomoyuki Hoshino,” states his credo: writing fiction is “an art that wavers, like a heat shimmer, between joy at the prospect of becoming something else and despair at knowing that such a transformation is ultimately impossible. . . . A true experience of reading is always located in the territory where these two forms of consciousness intermingle.”

In the last short story, “Air,” Hoshino brings, with disturbing ex-plicitness, his key theme of transformation to the physiological machineries of gender in the human body. As the psyches, obsessions, and bodies of his two characters merge, Hoshino frequently and without alerting us switches point of view between them, thereby involving us with the story’s core issue, the mutability of identity and gender. Then, with carefully controlled ambiguity, he leaves the ending open to multiple interpretations.

In his preoccupation with modification of body and being, Hoshino shares an affinity with cinema’s poet of imperfect transformations, David Cronenberg, in films such as Videodrome (1983), Dead Ringers (1988), and The Fly (1986). Hoshino also reminds me of Cronenberg in the unwavering integrity of his uncompromising vision and his willingness to trust and challenge his readers.

In a blog entry, Hoshino wrote, “The power of words to break apart the violence of the majority, to vivify the position of the minority, lies not only in the words themselves but also in their context and their emotional core.” This power surges through each fantasia of failed transformation in this remarkable collection.