Notes from the Field

Series editor’s note: What happens in the aftermath of a long, ravaging war? What happens to folks whose country is always at war with them? These are the poignant questions Jehan L. Roberson asks in her poem “Notes from the Field,” painting a rather grim picture of bodies singing and rotting in the streets. But this is not just about the aftermath, which also seems to overlap with the present; the poem goes back to the origins of this country, to question the constitution itself that refuses to hold all its people equally. And though there is fury and anger embedded in the tone of the poem, there is tenderness too, as that is a necessary balm in the aftermath. Here, the poem seems to say, we want courage, we want many things afforded to others, we want dignity and decency, the privilege to die from natural causes; here, the poem offers itself as a safe space for us to make our demands, for us to imagine a life in which our people were not constantly at war, constantly within war. Here, in this poem, be the aftermath; breathe, and bear witness, and help us build a country that can hold us. – Mahtem Shiferraw

Notes from the Field

In the aftermath, we cross
borders, sidewalks and
bridges, venture past
vacant buildings and neighborhoods
paying homage to a city
ever present,
no longer
here.

In the aftermath, only remnants
are found; cloaked fear sits atop
mountainous forms
of ash and sweat,
bones and tears. Bodies
sway and sing and rot
in the streets

In the aftermath we search
for answers to questions
we ought not to ask
list demands, thrust them
like church flyers
into palms full
of longing
we want stars
in clouded skies
and full moons

we want them back,
those things
we never really had. 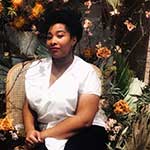 Jehan L. Roberson is a writer, educator, and artist using text as the basis of her interdisciplinary practice. She is a PhD student at Cornell University in English literature, where she explores transnational Black literary production. She holds an MA from New York University in humanities and social thought and has worked previously as the collections specialist for the Hemispheric Institute Digital Video Library, a video archive of performance practices in the Americas. Her work appears in Apogee, Public Books, Women & Performance, VICE, and Autostraddle, among others.