Series editor’s note: In Chris Abani’s poem “Ritual Is Journey,” the black man has been laid bare on the page, his histories refocused, and though he originates from light, from a particular flutter, it is clear that his lineage has been littered with small wars. “To be a man, to be black, to be a black man,” Abani writes, “is a dangerous journey.” These lines strikingly and precisely encapsulate the essence of the black man, not for what he is but, rather, both for what has been done to him throughout generations, and how the world chooses to perceive him. To be a body that contains a world, to be a world that is dangerous and in constant danger, is like being able to carry the suffering of all black men, all at once, all the time, for the heart has turned into a knot, churned by so much violence, “wisdom won blow by blow.” Whether it’s through the familial narrative, or the generational one, the poet builds the world in which the black man can make sense of himself inhabiting this world that continues to persecute him one way or another, which seems like an impossible task, and yet here it is, another poem, another flicker of light. Look. – Mahtem Shiferraw

And suddenly it’s raining, streaking train windows.
And light becomes a bird, a particular flutter.
What shadows let slip, tattoo patterns on skin,
repairs with needle and ink,
and the whisper of lineage.
To be a man, to be black, to be a black man,
is a dangerous journey. My heart is a knot
burling a staff, wisdom won blow by blow.
Father, I say, father.
Mercy. Come mercy, come.
Brother, we share genes so old
England was still black, and Africa
was the only present tense in the world.
As we unzip tracks in flashes of light,
I seek an impossible dream.
Yet all rivers flow to the ocean.
All the doors white men
closed in my father’s face,
cannot compare to the void,
in which my mother found no door.
Mercy. Come mercy, come.
This is no lament; women deserve our awe.
In Africa we say, he who strikes a woman strikes stone.
If women called out from all their loss
and in all their power, blood would drown everything.
And does that first black woman regret letting us live?
Still, ritual is journey, atonement is real.
As you lay dying, I asked, what is your biggest regret?
Every kindness withheld, you said.
Every flicker of pleasure denied, you said.
Look, you said, sunlight. 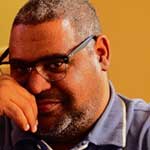 Chris Abani’s books of fiction include The Secret History of Las Vegas, Song for Night, The Virgin of Flames, Becoming Abigail, Graceland, and Masters of the Board. His poetry collections are Sanctificum, There Are No Names for Red, Feed Me the Sun: Collected Long Poems, Hands Washing Water, Dog Woman, Daphne’s Lot, and Kalakuta Republic. He is the recipient of a Guggenheim Fellowship, the PEN/Hemingway Award, the PEN Beyond the Margins Award, the Hurston Wright Award, and a Lannan Literary Fellowship, among many honors. His work has been translated into French, Italian, Spanish, German, Swedish, Romanian, Hebrew, Macedonian, Ukrainian, Portuguese, Dutch, Bosnian, and Serbian. His interview with Rob Roensch and Mary B. Gray appeared in the July 2018 issue of WLT.