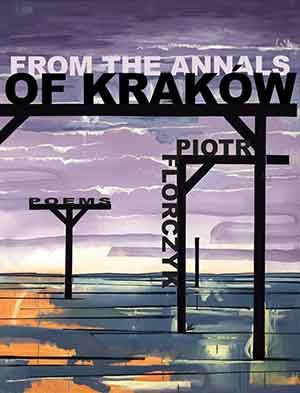 Piotr Florczyk’s From the Annals of Kraków (Lynx House Press, 2020) narrates the searing realization of an almost unnoticed absence, a regret urging us to learn about what we missed. This, his second full-length volume of poems in English, shows that the shadow of the Holocaust continues to touch generations born in the late decades of the twentieth century. In his case, the desire to learn how his Jewish neighbors lived and what happened to them merged with his desire to honor the memory of his grandparents who were slave laborers during World War II. His poems are thus a “song . . . certificate of authenticity.” An answer to the deniers, they go beyond postmemory mourning and anger. Orchestrated by palimpsests, they create a multitiered lieu de mémoire and a multivoiced narrative for Kraków’s Holocaust victims. We hear the victims’ testimonies, Florczyk’s reaction to them, and his Holocaust tour guide’s information. We are with him at the USC Shoah Foundation where he gathered testimonies, during his visits to the Kraków ghetto and surrounding camps, and at memorial sites nearby. Of the squares in which Jews lived and died, he writes: “the square not a blank page then / or the proverbial do-over / but one script / placed atop another script – like / so – where / the present meets that which was and could’ve been.”

Who speaks words so terrible that the capture/release of emotions reduces his voice to a whisper? Only a shared voice can utter words that come from listening or words that “become mine the moment I let them go.” Florczyk bookends the main body of the volume (the prologue and thirty-four poems of “From the Annals of Kraków” and the six poems of the coda) with a double interrogation about his journey (“Lieu de mémoire” and “Second Language”). He urges us to read the book backward and to double-check the roots of his urgency to remember: exile (Chopin’s “funeral” heart preserved in Warsaw’s Church of the Holy Cross), disappearance (rain effacing our initials), and the inability to “keep the world from falling apart.”

Florczyk uses mathematical precision to portray the victims’ dehumanization. The numbered poems of “The Annals of Kraków” have no title. Four of them are blank. Three of them consist of seemingly random lists: twenty years, twenty days/months, and fifty-six names. A poem about railroad trains is presented as a simple but deadly math problem. The chilling Holocaust narrative is wedded to equally chilling memory and memorialization facts: the superficial understanding of Holocaust tourists, or the disappearance of an airfield built by slave laborers under “encroaching apartment blocks.” The six numbered and untitled poems of the coda offer reflection and provide a counterpoint to the internal memorialization of “From the Annals of Kraków.” This is the end of the journey, in the forest where an obelisk’s stone markers are slowly disappearing.

Florczyk writes in both Polish and English. Widely published in poetry journals, his volumes include a chapbook, Barefoot; a volume of short essays and black-and-white photographs, LA Sketchbook; and two volumes of poetry, East & West (2016) and Dwa tysiące słów (2019). He is also a translator, academic, and the co-founder of a small press called Textshop Editions. His translation of Anna Świrszczyńska’s Building the Barricade received the Harold Morton Landon Translation Award in 2017.