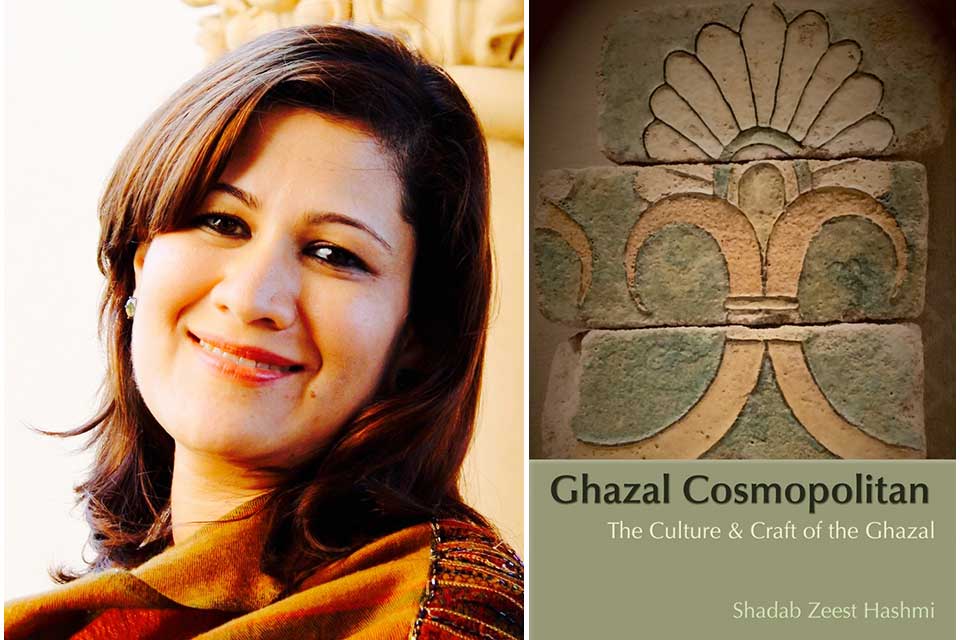 Shadab Zeest Hashmi’s Ghazal Cosmopolitan: The Culture and Craft of the Ghazal (Jacar Press, 2017), a melding of personal and craft essays, qasidas, and, of course, ghazals, functions as a kind of meta-ghazal itself. In the essay “The Ghazal: Expressing the Inexpressible,” Hashmi references Agha Shahid Ali’s likening of each couplet in a ghazal to “a unique gem which enhances the beauty of the ghazal’s necklace but retains its own brilliance outside of it too.” In the same way, Hashmi’s essays are both beautiful and informative on their own but, taken all together, create a work of nuanced and layered brilliance. Hashmi’s mind is like a light source, coming at her subject from many different angles, and so illuminating every facet of what the ghazal has been, and meant, and is becoming; its movement and shaping through histories, landscapes, linguistics, and personal memories. Each essay and poem engages with the ghazal in its own way but also adds to a building glow of understanding when read alongside the others.

In the author’s note that introduces Ghazal Cosmopolitan, Hashmi says she has “come to appreciate the ghazal’s cosmopolitanism even more in the USA—its home now for more than half a century.” Indeed, the ghazal is arguably one of the most popular and prevalent types of formal verses being written and published in the US today. The rules are deceptively simple—at least five stand-alone couplets bound together by a common rhyme and refrain—but as with any form, the trick is to make it sing. Traditionally, Urdu ghazals are sung quite literally; as Hashmi says: “The ghazal first entered my consciousness as music . . .” In illuminating comparisons between ghazals by Grace Schulman, Agha Shahid Ali, Marilyn Hacker, and Ghalib, Hashmi traces the journey of the ghazal from Urdu into English, describing how the form’s inherent adaptability, its cosmopolitanism, allowed it to eventually find a way to sing in a new tongue for a new audience with different expectations and sensibilities.

Hashmi traces the journey of the ghazal from Urdu into English, describing how the form’s inherent adaptability, its cosmopolitanism, allowed it to eventually find a way to sing in a new tongue for a new audience with different expectations and sensibilities.

Throughout the book, Hashmi’s lyrical language is sensual and present. Even when stepping out of the personal into the historical, her descriptions remain visceral, grounded in the senses. In her retelling of an old Urdu tale, a jinni is lured into the human world by the “profound visual and sonic beauty of Urdu, its earthy footfall and lyric leaps,” and by the way a ghazal’s couplets “combine the sensibilities of parched deserts and spectacular night skies, rugged mountains, finely cultivated gardens, steppes, monsoons—the ink bearing the musk of many lands.” With her poetic language, she permeates Urdu, a language I don’t speak or read, with a scent and a song I can’t help but long for in my own body, a yearning to experience firsthand the way Urdu “hangs like pollen.”

In the lyric essay “Silk Road Sherbet,” she traces the linguistic journey of names for the ingredients in a recipe for sherbet, musing through time and history along the Silk Road, describing how the simple act of saying these everyday names allows her “to take in the singular flavor of hybridity leading to the synesthesia underlying language.” In the following essay, “Counting Desserts,” these same ingredients reappear in her favorite childhood sweets as she turns their Urdu names—which “likely came from the Mughal Royal kitchens; names of syrupy, milky, cardamom-scented delicacies which suggested an ecstatic mix of cultures”—into a lullaby to soothe a colicky infant in an American city, “where my accent is foreign even under my own roof, where my children sing in Urdu but debate in English.”

The way Hashmi’s personal essays collapse time and space, allowing the vast accumulations of history within a single word to enter the most intimate of moments, beautifully sets up the overarching premise of her book, the essential cosmopolitanism of the ghazal. In the book’s title essay, “Ghazal Cosmopolitan” (first published in the May 2017 issue of WLT), Hashmi describes two major expectations set up by the form of a ghazal:

one, that each successive couplet will be locked in by the same phrase/word/image of the radif, and two, that a wild freedom of perspective will be offered like a new puzzle piece that astonishes by fitting the given radif as perfectly as the previous one.

If this book works like a ghazal, the radif would be that concept of cosmopolitanism, which Hashmi first defines with the dictionary definition: “being free from local, provincial, or national ideas, prejudices or attachments, at home all over the world.” She goes on to say, “It celebrates pluralism as fiercely as it forges an autonomous voice.”

Hashmi enters each essay from a different perspective, but each time I was pleasantly astonished by how she looped back to her central thesis, her radif. In this way she unpacks the cosmopolitanism of Urdu, the language that gave birth to the ghazal, and English, one of the more recent linguistic homes of the ghazal:

Urdu and English are both languages with rich textures and tensions built into them, poetic tensions between the victors and the vanquished, of diverse landscapes—and from these tensions the scintillating song of the human spirit, its struggle and celebration, memory and articulation, the grit and grandeur of history cutting windows of perspective in an unknowable future.

Coming at cosmopolitanism from a different perspective, she likens the urgent “cry” of the ghazal with Lorca’s concept of duende. Hashmi explains “the term ghazal (literally gazelle in Arabic) is sometimes characterized as the last cry of the gazelle when it is cornered in a hunt.” This image echoes the earthy urgency of duende like the firm stomp of a flamenco dancer, as if channeling that undefinable “something that travels up from the soles of the feet.”

One comes away from these essays not only knowing so much more about the historical and cultural significance of this adaptable form but also enraptured by the ideal of cosmopolitanism, the idea of form as a way to make room to say many things.

One comes away from these essays not only knowing so much more about the historical and cultural significance of this adaptable form but also enraptured by the ideal of cosmopolitanism, the idea of form as a way to make room to say many things, all of them worthy, maybe even contradictory, and yet somehow not in argument with each other but accreting meanings as the light bounces back and forth, as the great and violent movements of history and context shift and change around them, their shade and shine altering to accommodate but also to reflect back some truth, some ideal that does not change, however inexpressible, a touchstone, a radif the world is constantly clicking back into. As Hashmi says, “The ghazal provides the flexibility, the economy, and the hinge that joins contraries—keeping them apart, keeping them together, keeping the cosmopolitan intact.”

At the end of the book, Hashmi treats us to some of her own ghazals and qasidas, and it is a pleasure to see some of the same themes and traits she has explored in her essays echoed and made manifest in her lyric lines. In “Broken Ghazal,” the opening couplet evokes an heirloom quilt of verses, reminiscent of the historical and linguistic lineage explored in the essays. The cry of the cornered gazelle returns as the cry of the huntsman’s axe, and Ghalib and Keats share a couplet in which “a poet so baffles the broken.” In “Ghazal: Key,” “language and geography are star-crossed lovers; each road, a tongue,” which reminds me of her assertions in the essay “Have I Taken Language as a Loan” that “If I carry language, I carry land” and “We may escape languages, not histories—our histories are our tongues.” In “Ghazal: Well,” Lorca’s insistence that an artist must fight “the duende by dueling it along the rim of a well” takes the form of a dove who teaches her young to “build a nest under the cannon’s eye / Long live the spirit that fights a duel on the rim.” And in the final couplet of “Ghazal for the Girl in the Photo,” the intricate, undefinable largeness of the book as a whole finds its counterpart, “collapsed and expanded” as lyric cry:

Zeest, return to the arms of memory, the riddle of its minefields, velvet lullabies
To lilt of this land, its lyrical storms, its bells and bagpipes, you’re no stranger 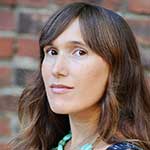 Erin Rodoni is the author of two poetry collections: Body, in Good Light (Sixteen Rivers Press, 2017) and A Landscape for Loss (NFSPS Press, 2017), winner of the Stevens Award sponsored by the National Federation of State Poetry Societies. Her poems have appeared or are forthcoming in Best New Poets, Blackbird, Colorado Review, Cimarron Review, Poetry Northwest, and The Adroit Journal, among others. In 2017 she won the Ninth Letter Literary Award for poetry and the Montreal International Poetry Prize.