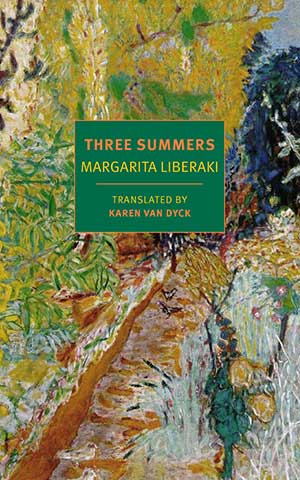 Three Summers begins with a mystery. Katerina’s absent grandmother is an enigma to her family. Katerina fixates on this character and romanticizes her life, which holds a looming presence over the narrative. The rest of the family sees the grandmother’s departure as a betrayal. The rejection of the traditional family structure by the grandmother shows how each of the characters deals with loss. Certain choices made by the characters reflect on how we learn to move on and represent our values in the future.

Margarita Liberaki is a Greek writer and dramatist from Athens. Published in 1946, Three Summers provides an escape to the Greek countryside. Over the course of three summers and through the characters of the three sisters, Liberaki presents a story about love, loss, and understanding. This classic novel is the most notable of Liberaki’s works. She tells the story through the eyes of the youngest sister, Katerina. The sisters navigate their way through life in order to understand who they are and the world around them. The translator, Karen Van Dyck, knew Liberaki personally and worked on her first translation. Her goal for this edition was to maintain Liberaki’s vision while striving for this translation to be noticeably different from her original version.

Each of the sisters has her own unique personality. Maria is the eldest and has the boldest nature. She presents herself as flirtatious and eager to settle down. The middle sister, Infanta, is the most beautiful of the three. She is both artistic and distant. The youngest, Katerina, is rebellious and imaginative. While these three are the focus of the novel, they live with other distinctive characters such as their mother, Aunt Theresa, and their grandfather. They are also surrounded by interesting neighbors like the wealthy Mr. Louiz and the independent Mrs. Parigori.

The reader lives inside Katerina’s mind. Her vivid and unique perceptions offer an enchanting narrative. Katerina’s plans to travel and explore the world represent a young spirit wanting to make her way in life. She sees how the world can be rather than following the traditions of her family. Following Katerina through her journey allows for a learning curve about family values and the notion to make life worth living.

Absent family members are present. The sisters’ parents are divorced because of the father’s infidelity. The only time they see their father is on Sundays in Athens. The relationship with their father often seems lacking but genuinely loving. He shows these feelings from the books he reads them and wishes to share parts of his life. He represents how time changes relationships. As the three summers go by, the three sisters begin to realize the opportunity for second chances and forgiveness.

The sisters experience love differently. Maria presents herself as the most experienced when it comes to men but is also the most traditional. There are two different ways one can live one’s life. The path Maria takes is considered “settling,” while the other is to live independently. Infanta’s experience with love represents the expectations of men and the consequences that happen from specific choices. Katerina is conflicted between adventure and settling. The decisions the sisters make in relationships define each of them. Each affair sets the pace for the future and reminds readers that we never know how our lives will turn out.

The Three Summers takes the reader on a whirlwind coming-of-age story. The nostalgic and airy atmosphere of the Greek countryside allows us to reminisce about time gone by. Each character represents a person’s development through life. We each have our challenges and expectations to meet. Liberaki explores familial values while advocating for making the life you have the best it can be. As Katerina states, these three summers “will play a role in our lives” forever.

Olivia McCourry grew up in Norman, Oklahoma, and is a recent graduate from the University of Oklahoma. She is currently interning at World Literature Today. With interests in writing, editing, and a love of literature, Olivia hopes to pursue a career in writing and publishing.