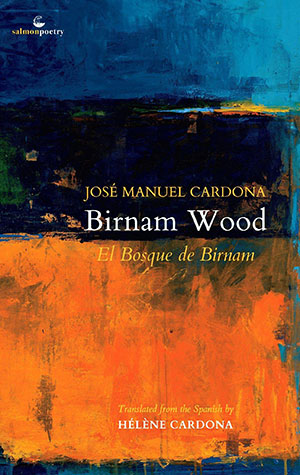 José Manuel Cardona’s collection Birnam Wood / El Bosque de Birnam (Salmon Poetry, 2018), translated by his daughter Hélène Cardona, opens with an epigraph from Percy Bysshe Shelley’s 1820 closet drama Prometheus Unbound, which itself was an exercise in creative translation, a reimagining of a now-lost play by Aeschylus of which only fragments remain. Considering the ease with which the Cardonas move within and through languages as well as the format of the book—José Manuel’s original Spanish on the left, Hélène’s English translation on the right—we can wish for no more fitting epigraph to the book than Shelley’s since here “Language is a perpetual Orphic song.”

This review, I should say at the outset, won’t dwell much on the titanic feat Hélène Cardona’s translation achieves, that of being almost indistinguishable from the original to a bilingual reader who consumes the collection reading the recto and verso of each page, in order. At times, I forgot which poem was the original and which the translation. It is fitting that the preface of the book is by Andrés Neuman, who, on his personal blog, remarks that “querer a alguien implica transformar sus palabras en las nuestras”: “To love someone implies transforming their words into ours” (“Translating Each Other”).

Gone is the prevailing notion of the traduttore / traditore adage familiar to every one of us who has studied comparative literature—where, in a vowel change, the Italians made their (all too familiar) feelings about translation known. Yet in the Cardonas’ work, we find no such ill will. What larger measure of love is there than to spend time with a family member’s words? Not only to internalize them but to produce them just as beautifully in a language common to both author and translator, both father and daughter? Hélène Cardona’s translation of her father’s poetic anthology imbues the same reverence to the Old Masters of world literature, among them Homer, Góngora, and Shakespeare—from the last of whom the collection takes its title—into the fabric of its English lines as the originals show.

This tripartite collection begins with the “Poems to Circe,” which are addressed to that Oceanid nymph who is reimagined here with some attributes of Calypso, who herself, depending on one’s reading of the Odyssey, either soothed Odysseus on his return home to Ithaca from Troy or waylaid him and frustrated his attempts to reach Penelope. By opening with a section of poems that function as love poems to a traditionally maligned character, the book’s polyglot celebration of multicultural sources shines through—not only does the elder Cardona engage with distinct polyglot traditions, he imbues his crisp Castilian Spanish with the Greek tradition of ξενία evident in Circe’s original welcoming of Odysseus, a tradition of consummate hospitality to strangers. Cardona’s speaker in part 1, an Odyssean traveler himself, though never conclusively identified with the Homeric character, implies that this particular reworking of Circe never broke ξενία as blatantly as her Homeric iteration did, though she has that same darkness. Despite—or perhaps because of—this, the speaker of Cardona’s poems is compelled to “carry on on this island, whipped by typhoons / Chained to the sea” screaming “until hoarse, your beloved name.” The poems in this section not only deal with the relationship between the speaker and Circe but also show an awareness of the sense of erudite play afforded a polyglot poet who is confident in the magic of his voice (much like Circe’s) to pun on an episode in book 9 of the Odyssey where, in accordance again with the laws of stranger-friendship, Odysseus responds that Οὖτις is his name when asked by the Cyclops. Cardona alludes to this when he says “When they ask, I will answer: No one” (Poem to Circe XVIII).

Cardona’s collection harnesses the power of nostalgia in the Greek sense: a longing for home.

The second section of the book, “The Vintner,” opens with an ode to Ibiza, José Manuel Cardona’s birthplace; here, he shows a versatility that not only touches on the classics of Spain and the Greco-Roman world but one that echoes the poetry of the Americas as well. The second stanza of “Ibiza” echoes the structure of Neruda’s poem “Walking Around” but in this versión ibicenca of the poem, we do not find the speaker tired of being a man; instead, he luxuriates in his homeland, telling the interlocutors (readers or listeners) that “now I have no mystery for you. / I am the man from the island of Ibiza.”

Preoccupied with place equally in language, time, and space, the poems in Birnam Wood are, like the title of the collection, easily understood the first time they are encountered. With every minute spent more closely reading the poems, however, we begin to hear echoes of things suggested intertextually both between lines and between poems. If Birnam Wood is mentioned, Dunsinane Hill mustn’t be far behind, right? This collection, though, is not bogged down in mist and rain like a certain Scottish king’s demise at Scone. Rather, though it ends with an “Inhabited Elegy,” Cardona’s collection harnesses the power of nostalgia in the Greek sense, a longing for home, to shine through the sadness of some of its poems to remind readers that “in the sunrises / memory comes back to” us, and we are richer for it. 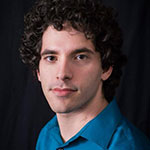 Courtesy of the University of Missouri

Jordi Alonso graduated with an AB in English from Kenyon College in 2014 and was the  first Turner Fellow in Poetry at Stony Brook University, where he received his MFA. He is a Gus T. Ridgel Fellow in English at the University of Missouri, where he is a PhD candidate studying the cultural transmission of nymphs and fauns in literature. His work has appeared in Kenyon Review Online, Noble/Gas Qtrly, Southampton Review, Levure Littéraire, and other journals. Honeyvoiced, his first book, was published by XOXOX Press in 2014, and his chapbook, The Lovers’ Phrasebook, was published by Red Flag Poetry Press in 2017.