In Murata Sayaka’s Convenience Store, a Microcosm of Japanese Society

When Convenience Store Woman came out in 2016, Murata Sayaka (b. 1979) won the Akutagawa Prize, usually the imprimatur of potential for a new writer. This was thirteen years after her debut as a novelist, by which time she had already established herself as the successful author of numerous novels, several of which had won prestigious literary awards. Convenience Store Woman, the sparse tale of a square peg in a world of round holes, is surprisingly poignant. Ginny Tapley Takemori’s recent translation (Grove Press, 2018) is eminently readable, capturing well the rhythms of Murata’s prose and the relatively flat tone of the narrative voice, a tone, I might add, that is perfect for the story it relates. The broad theme of “fitting in” will certainly resonate with anyone who has ever felt the outsider; it will also call to mind the old and oft-repeated Japanese saw about the nail that sticks out getting hammered down. How Murata’s protagonist, Furukura Keiko, handles her “inner nail” is one of the enjoyable surprises of this short novel.

The broad theme of “fitting in” will certainly resonate with anyone who has ever felt the outsider; it will also call to mind the old and oft-repeated Japanese saw about the nail that sticks out getting hammered down. 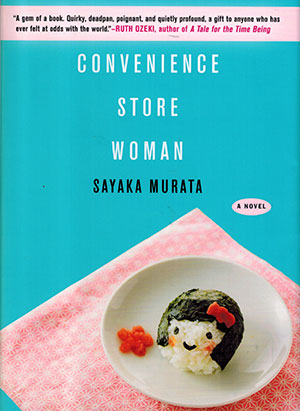 Keiko is, in common parlance, on the spectrum, a fact that becomes apparent early in her childhood. Sometime during her first few years in primary school, she witnessed a playground fight between two young boys. Her peers were in a frenzy, uncertain how to make them stop, but Keiko simply acted upon the cry that “‘[s]omeone stop them’” in the most direct way possible. Her eminently logical—and equally unorthodox—solution to the crisis was to take a spade from the toolshed and “[bash] one of them over the head.” She is, of course, thoroughly nonplussed by the stunned reaction of the teachers around her.

The same laser-sharp focus on the logical, with no awareness of—let alone concession to—the mediating effects required of normal social interactions, informs her reaction to her sister’s difficulties with her small child: Keiko’s approach is reliably direct, idiosyncratic, and horrifying. There is an undeniable humor in these vignettes, the roots of which reside in our awareness of how inappropriately extreme the responses are, yet it is a careful humor that Murata cultivates. Never do we sense that the author is making fun of her protagonist; rather, she is welcoming us into the unfamiliar world of a person for whom seeing the obvious is not perfectly aligned with seeing the socially sanctioned, allowing us to recognize in this disharmony a distinct melody all the more beautiful for its revelations. We are thereby prepared to respond sympathetically to this young woman who “couldn’t for the life of [her] understand what was the problem.”

Some might see in Convenience Store Woman a window into the place of the convenience store in modern Japan. Efforts in recent decades to fully embrace the “convenience” of the moniker mean that the role played by these establishments in everyday life has, in its own way, come to influence how ordinary Japanese order their quotidian lives. Those insights, cogent though they might be, are but gravy on the metaphorical meat of the story. How Keiko navigates the world in her own inimitable way is a far more compelling component of the tale, although it is an unanticipated extension of “convenience” and the regularized ubiquity of those stores that aids her in this journey.

The novel’s title is absolutely precise in its description of the story, a precision that is wholly appropriate given the protagonist’s total, unquestioning reliance on the titular environment to structure her existence in a world that is equally unreflective in its rejection of difference. The unvarying routines of the convenience store, the scripted language, the obvious boundaries of right and wrong all combine to wrap the protagonist in a protective cocoon of regularity that disguises her difference. All she need do is “. . . play the part of the fictitious creature called ‘a store worker.’”

Convenience Store Woman is absolutely precise in its description of the story, a precision that is wholly appropriate given the protagonist’s total, unquestioning reliance on the titular environment to structure her existence in a world that is equally unreflective in its rejection of difference.

Murata’s protagonist makes her way safely through eighteen years, always working part-time at the same convenience store since it opened. Cocooned amid endless cycles of “a faint clink of coins” or the “rattle of a new plastic bottle rolling into place as a customer takes one out of the refrigerator” or “the rustle of customers picking up items and placing them in baskets,” Keiko has found refuge in this unvarying environment, endlessly new, since she was in her late teens. Her confusion at the inability of Shiraha, a new part-timer, to understand the importance of the routines marks a consequential perturbation in her well-regulated world where she wears the “convenience store worker mask . . . the only one [she’s] fit to wear.” Shiraha is, in many ways, functionally more impaired than Keiko. He is shiftless, uncouth, arrogant, and devoid of social niceties. He is as direct as Keiko is, but his bluntness lacks Keiko’s disarming naïveté. Thus, when he tells her, “. . . you’re the lowest of the low. Your womb is probably too old to be of any use, and you don’t even have the looks to serve as a means to satisfy carnal desire. . . . Frankly speaking, you’re just a burden on the village, the dregs of society,” we feel nothing but revulsion. Keiko, however, takes this vitriol in stride, precisely because the fundamentals agree with her own assessment of her position. She is protected from what would normally be painful by her inability to process nuance.

However unpleasant he might be, Shiraha provides the impetus for Keiko to try out a more socially acceptable frame for interacting with the world. It is no surprise that her co-workers, friends, and sister all celebrate this change, for it seems to mark Keiko’s integration, at long last, into their world. What could be better than ensuring that this nail no longer protrudes, no longer calls attention to its difference? That, of course, is the crucial question Murata asks of her readers. In no time at all, Keiko’s world has been turned on its head.

In the final scene of the novel, we discover that Keiko’s “inner nail” appears to have more rubber than steel, a defect that serves her well, even as it rebuffs the best efforts of society’s hammer to drive her into submission to the dictates of the norm.

The dénouement was both effective and plausible, given what we have come to know of Furukura Keiko’s character, even as it was satisfyingly unexpected. Structurally, Murata’s style resembles the jo-ha-kyū (preparation–development–fast finale) found in classical renga (linked poetry) and nō drama, in which tranquility yields to agitation before coming to a very quick resolution. In this case, that speed seems entirely congruent with Keiko’s own penchant for cutting right to the chase. In the final scene of the novel, we discover that Keiko’s “inner nail” appears to have more rubber than steel, a defect—or, perhaps more aptly, a deviation from the mean—that serves her well, even as it rebuffs the best efforts of society’s hammer to drive her into submission to the dictates of the norm. Although her sister may still lament, “Will you ever be cured Keiko? . . . How can we make you normal?”, Keiko is thoroughly self-aware. Not only will she never be normal in the way that Miho hopes, she understands the true power of her strategy to survive, which she finds within a society that seems to ask its citizenry to adhere to a putatively shared notion of what constitutes “normal.” “To stay in a convenience store, you have to become a store worker. . . . You just wear the uniform and do as the manual says.” Keiko is—as are we—content. 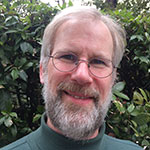 Erik R. Lofgren teaches Japanese language, literature, and film at Bucknell University and has been writing reviews for WLT for two decades. His research interests are in representations of sexual desire in film, and his most recent publication in this area is “Adapting Female Agency: Rape in The Outrage and Rashōmon” (Adaptation). He has also published translations of poetry by Natsume Sōseki and is currently working on a larger related project.