“It is easier,” Mark Fisher writes in Capitalist Realism: Is There No Alternative?, “to imagine the end of the world than to imagine the end of capitalism.” Consider the popularity of dystopian or apocalyptic TV shows, movies, books, and plays, all of which have experienced a recent resurgence. Consider now the quantity of discourse in mainstream outlets about a future beyond capitalism. Unsurprisingly, there is a disparity. In No Is Not Enough: Resisting Trump’s Shock Politics and Winning the World We Need (Haymarket Books, 2017), Naomi Klein demands we imagine that future, using her manifesto-cum-call to arms to convince, and climate change’s “science-based deadline” to compel.

For Klein, climate change is a direct outcome of capitalism’s iron grip on policy change. Thus, she argues that we must replace capitalism with an economy driven by regeneration and caretaking. But first, Klein turns to the rise of Trump, arguing that his presidency is the culmination of bigger social and economic trends in which we are complicit and must divest from to survive.

For much of the first half, Klein uses The Shock Doctrine to offer her take on Trump’s political success. So thoroughly is this earlier work employed that No functions almost as a primer for it, which will be interesting if unfamiliar, but potentially laborious if not. Its definitive dissection of the political processes needed to force unwelcome economic policies, described as “shock therapy,” are used to explain the events underlying voter disenfranchisement that significantly contributed to Trump’s victory, Clinton’s failure, and the heightened climate crisis.

In 2008 Obama promised to fix the ravaged economy by rebuilding Main Street and taking on Wall Street, banks, and industry giants involved in the generation of high-carbon emissions, like the automotive industry, which relied on the government to be bailed out. According to Klein, that these promises ultimately proved empty significantly contributed to Trump’s election. Change was not delivered, and the damage to the Democratic narrative was irreparable. This, along with Clinton’s unpopularity, neoliberal hypocrisy, email “scandal,” and sabotage of Sanders, helped put a climate-change denier in office. Not a unique take, but well argued and explained.

The second half moves toward actionable steps. For Klein, the ability to remember historic struggle is closely related to the ability to imagine, and fight for, a viable alternative to neoliberalism and capitalism. However, she claims the “matrix” of capitalism limits this capacity to imagine, and that what is too often missing from uprisings and protests is “a clear and captivating vision of the world beyond” the existing state. That vision must be “somewhere we have never been”: a bold new world.

The resulting manifesto may seem radical, but only within the ideology strangling us with austerity logic, leaving the end of the world more imaginable than a very possible and economically beneficial transition toward renewable energy.

Klein writes substantially about her experience at Standing Rock, clearly inspirational and invigorating, where she finds her vision—replacing taking with caretaking. Following this, in the last fifty or so pages, Klein actually charts a path for “winning the world we need”—nothing less, it transpires, than “a rebirth of humanity”.

But her idealism is not unfounded. The “Leap Manifesto” that closes the book was born from major talks in Canada initiated by Klein and her unnamed cohorts. The convention sounds remarkable: a broadly applicable “people’s platform” led by objectives, not policies, aimed at revitalizing communities and reviving the planet, ideally with the same tools. The resulting manifesto may seem radical, but only within the ideology strangling us with austerity logic, leaving the end of the world more imaginable than a very possible and economically beneficial transition toward renewable energy.

If you still feel overwhelmed, Klein does propose individual actions. “Decolonizing” the mind, for example—which she calls “killing the Trump within”—is vital to abandoning the idea that some people have the right to more, at the expense of others, and that individual success trumps the thriving of the whole. Overcoming our inner capitalist is achievable and could inevitably lead to the death of capitalism itself and all its manifestations.

Toward the end, Klein points out that “the current neoliberal system is not the only logical conclusion of the human story.” If the “Leap Manifesto” is anything to go by, we do have other options. Klein’s target demographic probably require little convincing, and anyone who reads center-left news will find much of the book familiar territory, while those on the right may feel alienated by Klein’s polemic. However, there is much to be said for optimism during times of shock, and the lack of hand-wringing is refreshing. Ultimately, there is hope, but we must work for it—and work together. 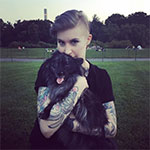