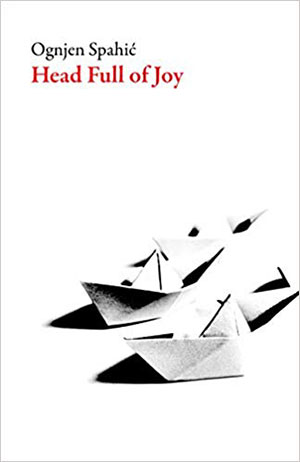 The title of Ognjen Spahić’s Head Full of Joy (Dalkey Archive Press, 2018), which won the 2014 European Union Prize for Literature, underscores its brutal ironies. In a “rotten country” after a fratricidal war, these Montenegrin protagonists— orphans, divorcées, thwarted lovers, widowers— face the existential question: to be or not to be. Suffering the pain of loss, their psyches embrace despair, cynicism, and violence.

These mostly metafictional stories, translated into the English by Will Firth, feature third-person and I-narrators. Some overtly surreal and parabolic, others combine dirty realism with Balkan humor and a surreal edge. Details carry dark portents: “Mist slithers like a python after slowly digesting its prey . . .” Intellectual protagonists, often artists or writers, read authors like Bernhard and Carver: in “Raymond is No Longer with Us . . .,” a husband battles his pregnant wife to wrest from her a borrowed book by Carver, recently dead, lest its “unsettling” quality disturb their unborn child.

Many stories critique the role of art. In “Free Sugar,” a giant sugar sculpture of Adam, with huge phallus and testicles, is consumed, sex organs first, by its desperate diabetic creator and an art student, who remarks as the sculpture dissolves, “He looks even better this way. . . . The role of art is to help people, to raise their awareness, isn’t it?” The “I” of “The Fly” (who authors Spahić’s novel, making the tale explicitly metafictional) mocks an Oslo literary conference that lauds books as weapons of reconciliation, implicitly advising that “Balkan idiots” read “as much humanistic-minded literature as possible” to keep from committing ethnocide.

No panacea, art channels emotion into violence. The doctor in the title story instructs the “I,” seeking therapy for his chaotic feelings, to think of something calming. From the image of a snowy Japanese village, the patient conjures a love triangle as a horn outside blares intrusively. His story ends with the maddened husband brandishing a knife. When the doctor asks what happens, he responds that only the character knows. Calmer as he leaves, “the morning pandemonium of my thoughts . . . erased by the story,” he finds his car, encounters the irate, horn-blowing woman whose vehicle his blocks, and promptly explodes into action, knocking out her teeth. Likewise, in “Cut, Copy, and Paste,” a grieving writer obsessed with the “absence” on his wall, created when his wife decamped with her birthday present to him— a painting of “male hands with two fingers pressing a deeply slashed wrist”— cuts his veins and pushes himself against the empty space. Dying, he embodies her art.

The juxtaposition of books and shit mocks the power of literature. The narrator of “The Fly” realizes that his seemingly gifted fly, atop a Bernhard novel, probably prefers “fresh shit” to “good books.” So, too, the son in “The Harbinger,” recalling his writer father’s suicide in a bathtub “full of feces, his books, and manuscripts,” discerns “no essential difference between the two substances: the same old shit.” The rats of “Rats and Writers,” meanwhile, transform their written history into “droppings.”

Death pervasive, cemeteries abound. “The Vampire” unfolds in a Podgorica cemetery aswarm with vampires hurling Aussie slang. There, a reluctant new vampire, Miomir Živković (whose root, živko, means life), drinks the blood of an overdosed girl and survives a vampire apocalypse. In “Winter Search,” a shattered widower forgoes his wife’s graveside memorial. His divorced son arrives at the snowy site to find most mourners gone, but his ex-sister-in-law stutters, “We look after our g-g . . . graves.” And the granduncle of “All That” cures his grandnephew’s fears of death by bringing him to a cemetery and having him imagine the process of burial.

Many characters bear tragic pasts, metaphors for Balkan history and modern culture. “Family History” traces Nikola’s heritage: his great-great grandfather beheaded Turks, his grandfather killed himself with a dead German’s pistol, and his father used that weapon on himself. After the death of Nikola’s mother, for whom “everything had some sense and purpose,” he suicides with the same gun. His friends blame his “inherited DNA.” Miomir’s bloodthirst comes from his father, now flourishing among Lisbon’s undead. And children of divorce and suicide repeat their parents’ acts.

These stories “unsettle,” coolly dissecting tortured minds. Paradigms of despair, perceived dead ends, and Balkan ghosts, they chronicle what the “I” in “The Fly” attributes to Bernhard, a “black but brilliant cynicism” and a “blooming and complex misanthropy,” from which he concludes, “We are all futile and dead.” Yet in Spahić’s first story, the murderous Dr. Junkić’s “Heliocentric Sermon” names the central problem: “impaired vision” that sees just “tedium, decay, and death.” For only a clear-eyed engagement with life can lead to a head full of joy. 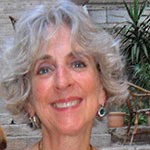 Professor emerita at North Carolina A & T State University, Michele Levy has published on major Russian and European writers and, since 2000, on postcolonial and postimperial issues in Balkan culture.