Two Tongues, One Heart: A Review of Between Day and Night: New and Selected Poems, 1946–2010, by Miguel González-Gerth 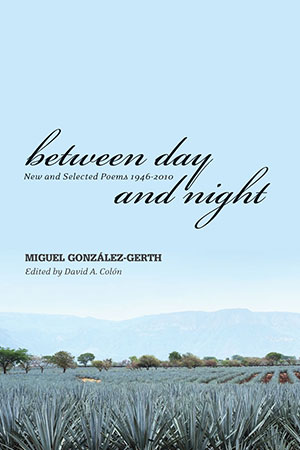 The author of Between Day and Night (TCU Press, 2013), poet Miguel González-Gerth, now ninety, has written in traditional forms and in free verse. While his strong formal poems never fall heavily on their rhymed endings, the free verse lyrics tend to be even stronger. He writes in English as well as in his native Spanish, often translating his poems to the other language. Born in Mexico City, the poet has lived most of adulthood in the US, including many decades teaching Spanish and Portuguese at UT-Austin as well as editing the Texas Quarterly.

González-Gerth acknowledges Octavio Paz, fellow Mexican and Nobel laureate (1990), as his “maestro”—because Paz believed that “Poetry does not give answers; it poses questions.” In response to Paz’s remark, he adds, “not explicitly, necessarily, but implicitly.” Both write about the nature of poetry, and neither were code-switchers. González-Gerth explains “that poetry resides in the language, and languages have different structures, different sounds.” Each language has its own integrity, and while many of the English poems are also in Spanish, it is difficult to discern which came first.

The use of form in his free verse in English is evident in one book’s title poem, “The Brandywine in Winter,” which begins and ends with the same line: ”Water and ice, the stream unfolds,” and variants of “Still, moving, moving still” act as a motif throughout. The form is there, even in free verse.

The poet’s recent poems are the most “philosophical,” as he questions the nature of life (and poetry). Some poems are explicit as the days, while others are implicit as the nights, asking questions that probe consciousness. “Inquiry” asks, “Why is it that with contemplation as a pretext / I really feel the need / to remain motionless, / barely blinking / moving my head slightly only now and then / when I see a bird fly by, a passing cloud, an inadvertent transient?” He asks questions of contemplation’s essence, as the basis for consciousness beyond reflexive acts, even as his thoughts are “interrupted” by swift birds and slow-moving clouds, which then become part of a continuous process. “Because a why seems always to amount / to a who goes there. / To be, more than to be there, than to exist / requires a reply / a reason, a reason for being.”

The mark of identity is encased in “Being”: to question is to be, and for poets, to be is to question in words.

The mark of identity is encased in “Being”: to question is to be, and for poets, to be is to question in words. He ends with the unanswerable question of time: “I behold the minute-birds, / the hour-clouds and the human-days, / weeks, months, years, maybe centuries,” which do not help us, “for they can’t answer the vitally brief, / the reasonably irrational and beguilingly divided question / about the why-who goes there.” This final section of free verse poems is the most powerful in the collection—not necessarily because they are in free verse but because they exhibit a deep honesty and humility.

How interesting that Dana Gioia, known as the leading critic of the “new formalism,” does not make a point of calling González-Gerth a “formalist” but rather asserts that “This rich collection of poems fills a significant gap in the history of Latino poetry in the United States. This surprising new book enlarges our sense of what contemporary Latino poetry can be.” He does opine that the poet is “formal, cosmopolitan, and neo-romantic” and “has blended elements from both Spanish and English to create a sophisticated lyric voice of genuine authority.” True, but the formalism of González-Gerth has to do with his sense of prosody and structure in both very different languages. 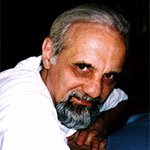 Robert Bonazzi is the author of Man in the Mirror: The Story of Black Like Me (Orbis, 1997) and afterwords to John Howard Griffin’s Black Like Me (Penguin, 2010). Other books include Awakened by Surprise (fiction, Lamar University, 2016), Outside the Margins (essays, Wings, 2015), plus five books of poetry.