Through a wealth of examples across disciplines, from novels, and from personal experience, Svend Erik Larsen’s Literature and the Experience of Globalization (Bloomsbury, 2017) suggests that literature has always influenced the process of globalization, and this is particularly relevant in view of its accelerated current pace. Literature, Larsen states, has the capacity to “shift the borders between the known and the unknown on the readers’ inner map.” Thus it is a privileged force in shaping an ever-increasingly hybrid world. 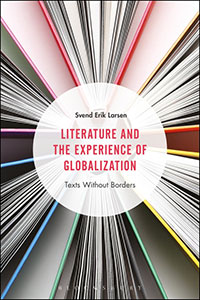 Written with an often poetic or philosophical flair that never detracts from rigorous scholarship, this book is often delightful to read, with succinct statements like: “Culture uses the lungs of language to breathe.” Indeed language, and thus literature, shapes our everyday lives and shared environments. Larsen also draws from science when suggesting that patterns of what we know determine how we describe the unknown (for instance, the “hole” in the ozone layer is actually a reduced concentration of gases). This facet of human psycholinguistic tendency is, I believe, crucial to understanding how Eurowestern settlers have described Indigenous peoples in a reductive and harmful way, a point suggested but not developed in a critical perspective by Larsen. To illustrate hybridity, Larsen frequently refers to his experiences on an extended visit to Newcomer High, a California school for immigrants.The book is divided into two mirrorlike parts, the first focused on literature’s view of globalization, the second on globalization’s view of literature. Some of the chapters are charmingly bold, such as “Knowledge as Creative Lying,” in which Larsen jumps from a discussion of an eighteenth-century Danish playwright to semantic issues surrounding global warming. In fact, this ability to navigate convincingly and fluidly between past and present, and between cultures as well as disciplines, makes Larsen’s book a highly original and necessary example of how to make literary study more relevant to today’s world. For that bold attempt alone, which will hopefully encourage others to develop new methods for the future of literary study, Literature and the Experience of Globalization deserves to be read. Even the attempt to focus on the experience of anything is a hopeful gesture toward taking literary studies down from the ivory tower.

Although his insights are often valid and usually interesting, some readers may find he is not political enough in confronting racial inequality and social injustice, though others could argue that this is not the point of his book. That raises an interesting question about whether a book that touches on charged topics of ethnicity and “race” should take a political stance or not. It also leads to the question of the category of World Literature itself—why is it necessary and what does it imply? Larsen paints a very positive picture of globalization and increased cross-cultural interactions, which may make those left behind or harmed by it (and their defenders) feel uncomfortable. Nonetheless, the astute qualities of Larsen’s literary analysis, and its bold attempts to show why literature matters at all, make this book worthwhile. Larsen does not shy away from any issues and is critical of some authors, particularly in the past, for stereotyping non-Western cultures; nonetheless, he does put a positive sheen on issues that may in reality be grittier in today’s world, where racism is definitely not a thing of the past.

Larsen does not shy away from any issues and is critical of some authors, particularly in the past, for stereotyping non-Western cultures; nonetheless, he does put a positive sheen on issues that may in reality be grittier in today’s world, where racism is definitely not a thing of the past.

Larsen does, however, possess intricate and precise knowledge across disciplines including history, law, and politics that can be useful and relevant to critical literary scholarship. He makes interesting and useful parallels between past and present, and his examples are often odd and refreshing (such as the chair on page 132). Like a storyteller, he makes history come alive in relation to literature, with an appealing mix of fact and analysis that creates a pleasant read that avoids the obscurantism too common in academic works. He is never arrogant and cites texts when relevant, not because you are supposed to or to show off what he knows. Another merit is that he is clearly a champion of interdisciplinarity, a term often touted but less often given serious consideration or enacted. Indeed, this comes across as a work of intellectual integrity to the best of Larsen’s knowledge.

Literature and the Experience of Globalization can be useful for undergraduate coursework and for anyone trying to figure out literature’s role in the hybrid world historically and especially today. Overall, Larsen demonstrates an unwavering voice of passion for global literatures that is contagious in the reader, with plain language for complex ideas that suggests a gifted professor, and overall I would recommend this book with one word in mind: in spite of its possible blind spots alluded to above, the voice of Larsen is, indeed, refreshing.

China University of Mining and Technology

As a professor at CUMT and previously while earning a PhD at Université de Montpellier, France, Kate Rose’s ([email protected]) research interests have included contemporary francophone women novelists’ use of magical realism, comparisons between Chinese and black American writers, trauma in literature, and Indigenous literatures. Most of her articles are accessible on academia.edu; she also publishes fiction and poetry regularly in literary journals.