If Serbian poet and novelist Zvonko Karanović were a painter, he would be a surrealist. In the forty-one dark prose poems of Sleepwalkers on a Picnic, in English and Serbian parallel texts translated by Biljana D. Obradović (Diálogos Books, 2020), he depicts a dreamlike urban existence in which nameless men fend off angst and emptiness among featureless buildings, generally unsurprised at the bizarre circumstances they find themselves in. A man in a hotel room discusses abstract ideas on the phone with his dead mother, only to be interrupted by naked women who try to strangle him (“In a Hotel Room”); a dog tells a man to create a life, and so he steps into a daydream to don a costume and frighten old women to death (“Picnic”); a traveler stares into a mirror and finds that he is the only passenger on a train in which a disembodied voice makes abstract announcements (“Abandoned by Worlds”).

Karanović’s imagery is vaguely foreboding and indifferent, more Max Ernst than Salvador Dalí: “The shiny masts of skyscrapers were supporting the tired, drooping sky.” Characters wander through a gray landscape of hotels, bars, shops, hospitals, and apartment buildings, having unplanned encounters with vague archetypes. Karanović’s narrators deliver sentences with a flat and matter-of-fact delivery, unembellished, conveying more detachment than desperation: “He’s riding the escalator up in an airport somewhere. A woman nearby is late for a plane.”

Given the dark, ornate atmosphere Karanović creates, it should come as no surprise that an epigraph by James Tate kicks off the proceedings, or that the poems make allusions to Rimbaud’s A Season in Hell as well as Bolaño, Kafka, and David Lynch. Taken as a whole, the prose poems create an absurd and sobering portrait of modern life. (Editorial note: “Rebel with a Cause in Serbia,” Biljana Obradović’s interview with Karanović, appears in the May 2013 issue of WLT.) 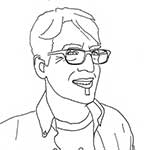 Angus Woodward’s books of fiction are Down at the End of the River, Americanisation, and Oily. His recent work in graphic memoir appears in Shenandoah, Split Rock Review, Lumina, and Slag Glass City, among others, and is currently being serialized by Hobart. Angus lives, writes, illustrates, and teaches in Baton Rouge.