The Mythology of “I” in Translation: Kim Myung Won’s “Dabi” 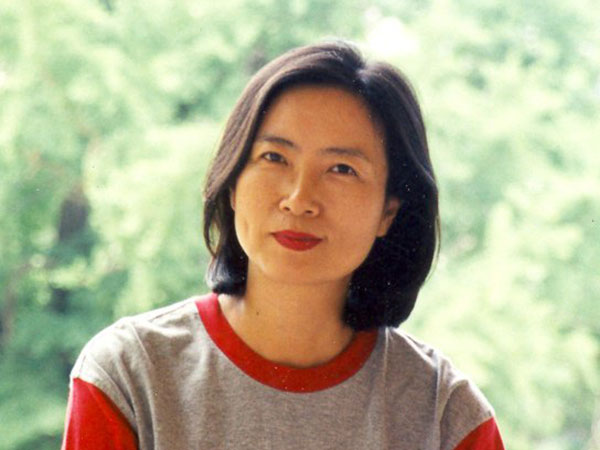 An impressive poet and experimental author in her own right, EJ Koh reflects on the many sources needed in order to translate Kim Myung Won’s poetry into English: family insight, self-reflexivity, and “sudden fire.”

Firewood with dimmed appendages of light
slightly weighted with stars.

Lying down as a round well-ripened apple
until only dazzling seeds remained
to reveal a paradox: you are present
only after disappearing.

Both the return trip
and the trip that has to be taken first, superimposed
by darkness, firmly tied together,

set his body on fire

The scent of apples is profound.

Translation from the Korean
By EJ Koh

* Dabi – A cremation ceremony in Buddhism for returning the body from where it came.

When I first came to translation, I was fourteen years old. My mother lived in South Korea and I lived in Davis, California. She would post me letters in Korean from 5,700 miles away. In my desperation to know her words, I sat with a letter she sent each Friday. Using a Korean dictionary, I deciphered circles and lines: “Miss you,” “Wait another year,” “My little girl.” I translated to be embraced by her words and to weep with them—with her. For me, translation is personal. What affected me about my mother’s letters were not the words themselves, but what those words were tied to. Though it took many years to learn, I aim to translate less with the mind and more with the heart.

My parents didn’t return to the States for another eight-odd years. By then, I was a woman. What remained was the cultural, generational, and physical distances that had been wedged between us. So when my mother introduced me to her childhood friend, the poet Kim Myung Won, who had visited during her professorship at Daejeon University, my mother also hoped to connect with my work as a poet. I remember when Kim Myung Won, with hair evenly cut across her chin, slipped off her shoes at the doorway, carrying an oversized red sweater over one arm. She hugged me as if we’d met before. She said I was like my mother, but made of fire. Soon, I learned both our works contained multitudes in voice, angle, and possibility, but its populace was undeniably all one poet. The confessional nature gave way to an intensive exploration of the self, at times admitting frustration, great sadness, or even alienation from the self. When she left, Kim Myung Won gifted me her first poetry book, Living Through Love. I began translating it in its entirety the following day.

Not only was it a physical act that somehow vanished the distance of years, but translating became a cultural exchange in the accretion of language and experiences that reveal a mythology of the “I” in its South Korean root, which my parents and I shared.

For “Dabi,” my father told me how the Korean culture follows ceremonies of Shintoism at birth, Christianity at marriage, and Buddhism at death. The ritual signifiers of all three are found in the flower patches (Shintoism), apples (Christianity), and firewood (Buddhism). There is a space for concepts of natural gods, heaven, and reincarnation to exist together because of the reverence for all possible avenues of life. “Dabi” is a cremation ceremony that returns the body from where it came. But the poem itself is an act of “Dabi” because the first stanza begins in the stars, moving into the temporal existence at the temple and finally into lying prostrate until the reader returns to the burning firewood, the stars. This poem returns the reader from where he or she started; simultaneously, the speaker takes her father’s body through the same cycle. Yet, sitting beside me, my mother warned that I cannot forget to translate the light in every moment of the poem. Even amidst the “blanketed darkness,” the contrast serves to enhance the presence of sudden fire. What she wanted me to translate was not the logistics, because those will be there, she says, but the possibility of hope amidst death.

Translating Kim Myung Won’s “Dabi” and other poems with my mother and father was the first thing we had done together. Not only was it a physical act that somehow vanished the distance of years, but translating became a cultural exchange in the accretion of language and experiences that reveal a mythology of the “I” in its South Korean root, which we shared. As Jorge Luis Borges said, Don Quixote “wins posthumous battles against his translators and survives each and every careless version”; I hope Kim Myung Won’s poems survive me. Rather than override her subjects of faith, love, and her father with verbosity, I hope to be a vessel for them. For me, my pursuit of the perfect translation exists in the tonal, investigating the space between words, in the inhale before a stanza break, and in creating something that awakens the childhood in ourselves.

Kim Myung Won is Professor of Korean Literature at Daejeon University in South Korea. She earned her BA at Ewha Womans University in Seoul and has authored several books of poetry.