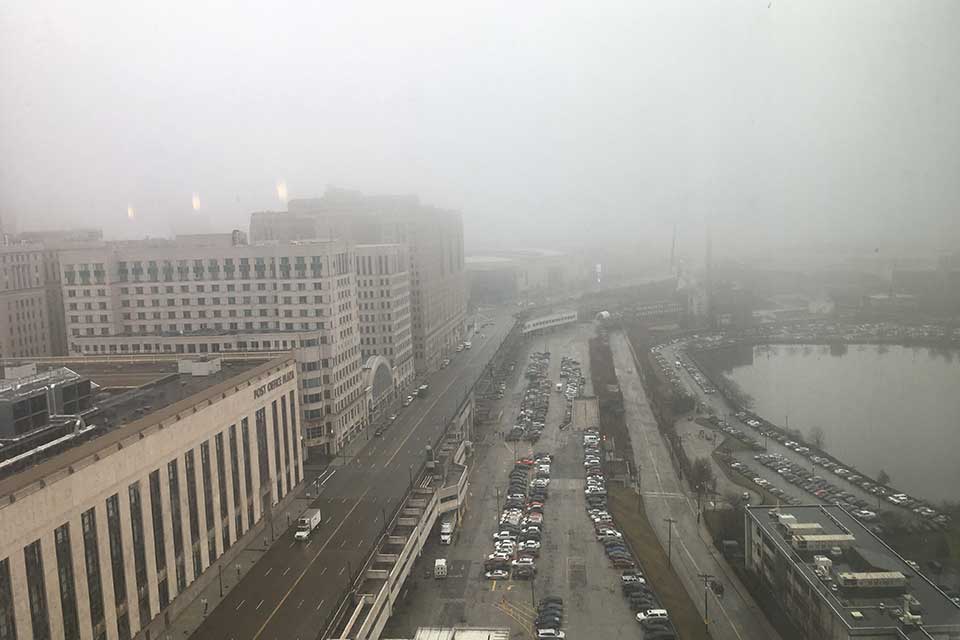 I am floating inside a blinding white box, suspended in the sky. As I lean against the wide window overlooking the city, my forehead touches the ice-cold surface, and I pull back. It feels like breathing glass in here. The heaviest of fogs has descended from the skies, and the skyscrapers look like fragile monsters against the horizon. Inside, the sterile atmosphere is unbearable. Diffuse light is streaming in cushioned waves, and yet the hallway is devoid of life. Two stone benches, two wide sealed doors, two broad white walls. The pristine cleanliness of the linoleum floors leaves a bad taste in my mouth.

When the phone rings, I move slightly to the side, weary of hidden cameras and microphones. “I feel exposed here,” I whisper, “and I don’t know where I am. They sent me to the thirteenth floor, but I can’t find the docket. There’s nothing here but crystal-clear air.” On the other end of the line, a woman’s voice reminds me I should breathe in and wait till the doors open. The docket will be inside, on the wall, right before the entrance to the immigration court. I am in the right place.

It has been a while since I’ve contemplated what it means to belong. Perhaps I am taking for granted my right to breathe the air around me, to use the pavement under my feet, to lavish in the shade of trees, and to absorb all the natural sunlight of the day, without asking any questions. Perhaps the trees here, with their twisted shapes and their heavy fruit, were not made for my enjoyment. And what of the trees of my childhood, stretching above my head like sheltering parasols, as I placed my head on the humid soil, my hair blending with the wild grasses?

It has been a while since I’ve contemplated what it means to belong.

I sit on the very last bench, motionless, my hands gripping the files to my chest. The judge is aware of my presence, yet he avoids looking at me. He is seated behind a sumptuous mahogany desk, a clerk on his left side, and the Spanish interpreter on the right. The judge is very handsome, in the way unbreakable people are handsome. Above his head, a large seal displays a bald eagle clutching in its claws a handful of spears, a laurel leaf, and the US flag. Five Latin words adorn the seal, Qui Pro Domina Justitia Sequitur. I wonder why the aggressive bird, a predator in its own right, would preside over a claim to absolute justice. I look around and see perfect harmony between the solid wooden furniture and the blue plush carpet. Everything is well ordered, clean, almost royal. But I know this is merely the semblance of a court of justice. Here, the law works in the interest of the powerful. Here, I have entered an alternate reality.

I know this is merely the semblance of a court of justice. Here, the law works in the interest of the powerful.

The screen flickers intermittently and then produces a stable image. The man has his handcuffs removed, he takes a seat on a low chair, and he crouches forward. All I see is a slanted image, distorted by digital noise. “¡Hola!” he says hopefully. The judge does not greet him back. He does not lift his eyes to meet the man’s. And he does not indicate he has heard the man’s voice. The judge is a closed vessel on a different journey across murky waters. He is busily engaged with the important work ahead of him, clicking away at invisible files and folders on his desktop. And then, all of a sudden, we are on record.

When we entered this country, we were told we had become aliens in the eyes of the law. We may have been human before, or at least persons with lives and families and histories, but we ceded this right when we entered, legally or illegally, and embraced the privilege of residing here. I look up the term alien in the thesaurus and I find: foreigner, nonnative, immigrant, emigrant, émigré, extraterrestrial, ET, Martian, Jovian, Venutian, and even little green man. I rub the skin on my wrists, looking for the underlying shades of green.

The man hesitates. He does not speak English, but he has the benefit of an interpreter. He tries to make his way through the judge’s sentences, plowing through a recalcitrant field of legal jargon. He changes his mind. He does not want to take the relief of voluntary departure if it means he will remain imprisoned in a cage for another month. He does not own a passport. It was stolen from his car a long time ago. In detention, he cannot procure one without the help of an attorney. And attorneys are expensive. The judge tells him he does not qualify for voluntary departure, even if he wants to depart voluntarily. To be placed on a plane back home, he must have a passport. To have a passport, he must be released from jail. To be released from jail, he must have documents. And he does not. The man breaks down in tears. I watch a grown man cry. “Me siento mal aquí,” he says.

He lived with his wife and two children. He had a roof over his head, a job, hand-painted furniture, a swing attached to the tree in the backyard, a blue truck, a collection of old tin cans turned into an art project, a handful of books, a set of old china plates from the vintage store, a television, four chairs on the porch and a table for meals on summer evenings. He wanted to go back to school and become a social worker. Yes, he did pay taxes. No, he did not commit any crimes.

The judge asks the interpreter to translate his words carefully. He wants to make sure the respondent understands the consequences of his decision. Since the man does not qualify for family-based status adjustment, nor for withholding of removal, and since he very likely will not be able to obtain the necessary documents to qualify for voluntary departure, he will be ordered removed. This means he will be returned to his home country at the expense of the government right away. This also means he will be blocked from entering the United States for ten years. Does he prefer to reschedule the hearing and hire an attorney to pursue alternative reliefs, or will he accept removal? The man tells him he cannot take being locked up anymore. He feels he is becoming ill. He fears for his own health. He worries about his children and his old mother. He wants this to be over and done with today. And so it is.

My hands move uneasily over the forms. I enter data. Alien numbers, respondents’ legal representation and access to an interpreter, forms of relief available, decisions made by the judges. Precise and dispassionate legal terms plunge through the shell of my heart and leave unwanted traces of debris behind. I am overcome by a feeling of shame, as if I am witnessing private secrets that should never be unveiled to strangers. What right do I have to be here and witness the humiliation of the human soul on such an overwhelming scale? And isn’t this court setting, with its aseptic and monstrous bureaucracy, too painfully intimate?

Precise and dispassionate legal terms plunge through the shell of my heart and leave unwanted traces of debris behind.

When I come out of the cavernous parking lot of the federal court, I am perfectly numb and dissociated from my surroundings. I drive away more out of habit, a vague instinct of survival buried in the pit of my chest. The streets look unfamiliar, as they are, bathed in the cold afternoon light. Garbage floats here and there under the bridges. And there are abandoned shopping carts at street corners. I turn on a winding street and end up in the bowels of the industrial city. I am disoriented and exhausted. And it is this desolate picture of the city that finally makes me break down. I look at the devastated landscape—the unseemly industrial rigs and abandoned factories, toxic waste emanating from their midst. This is by all means an uninhabitable land. I stop the car at the edge of the water, place my head on the driving wheel, and I let anxiety flood my body in waves. 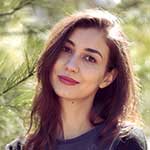 Alexandra Magearu is a writer and literary scholar born in Romania and currently based in Cleveland, Ohio. Her writing has been published in Tint Journal, The Comparatist, and two philosophy book collections, Ecosophical Aesthetics: Art, Ethics and Ecology with Guattari and Phenomenology of the Broken Body. She was awarded the Woodrow Wilson Dissertation Fellowship in Women's Studies for her literary scholarship.