Harbhajan Singh Hundal: The Poet as a Wakeful Dreamer 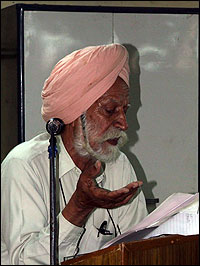 Harbhajan Singh Hundal was born in Lyallpur (Pakistan) in 1934. In addition to fifteen books of poetry, he has written travelogues and autobiographical accounts. He is also an avid literary translator. He has translated selections from Neruda, Lorca, Brecht, Mayakovsky, Darwish, and others into Punjabi. He has been at the forefront of people’s struggles and was kept in preventive detention for over four months during the Emergency. A recipient of the Soviet Land-Nehru Award, he has been editing Chiragh (The Lamp), a literary quarterly in Punjabi, since 1992. He currently lives in the village of Fattu Chak, Dhilwan, Kapurthala (Punjab, India).

The Punjabi poet Harbhajan Singh Hundal (b. 1934) is a poet of achieved, not received, utterance. He neither claims nor trusts inspiration. His poetry affirms reasoned dialogue as the foundation of human community, a belief he shares – probably unknown to himself – with Hegel.

Hundal’s poetry and his theory of poetry have evolved hand in hand. To the inattentive reader, he may appear to be contradicting himself when he says poetry has not come to him “as a gift” while holding also that it “flashes like lightning.” A careful reading of what he writes about poetry (in and outside the poems) reveals, however, that his practice of poetry has three clearly defined phases. In the first, the poet works to understand the object in its situation. This is the phase of observation, analysis, reflection, and self-correction. For Hundal, this is the longest of the three phases, and it prepares the ground for the poem to appear. Indeed, the poem will crystallize out of this preparation only. In the second phase, the poem flashes like lightning. In the third, the poet works on the raw poem with a sculptor’s elaborate care and gives it the final finish.

Hundal is a wakeful seer, not an escapist dreamer. He does dream, though, but in a way that is awake to the nightmares lurking in dreams. Even Punjabi nationalism, that ostensibly harmless pastime of many Punjabi writers, fails to enamor this thinking dreamer.

Hundal’s worth as a contemporary Punjabi poet lies as much in what he is as in what he is not. He is not a fabricator of myths, nor a vendor of nostalgic fables. He does not speak patronizingly of the disenfranchised, nor does he romanticize their “savage” existence. He does not tune his poetry to make politically correct music: to announce his arrival he does not beat his breast over gender injustice, caste atrocities, class oppression, or racist imperialism.

He is a wakeful seer, not an escapist dreamer. He does dream, though, but in a way that is awake to the nightmares lurking in dreams. Even Punjabi nationalism, that ostensibly harmless pastime of many Punjabi writers, fails to enamor this thinking dreamer.

Hundal stood his ground and did not succumb to the seductions of identity politics in an era that saw this politics sweep the globe like an epidemic claiming not only numerous lives but also several intellects. It is significant that he does not leave even the back door of his poetry ajar to let slip in those nefarious stereotypes that corrode the soul of some of the finest modern poetry in Punjabi. Jatt (the high-caste land-owning man), baniya (a man of the traditional trader and money-lending caste), kisan (the peasant), and kudi (the maiden) are not the staple ingredients of his poetry. The history that breathes in his work is the lived history of people. The culture that pulses through his work is an ensemble of lived practices in real spaces and historical time. For him, Punjab’s landscape, history, and legend are not things to romance with, whether facetiously or seriously. They are as ordinary and peculiar as such things are elsewhere. And they are certainly not available for periodic tweaking to match the evolving and revolving fads of political opportunism.

As for Hundal’s characters, they move in history’s moments, abnormal as often as normal, and are on that account irreducible to the abstract universality of stereotypes. The particular, sharply individuated characters, drawn from recent and contemporary history, appear in his satirical work; but they cannot be counted among his best. His best are concrete universals.

And that is how he stands apart among other poets of his times. Times, not time: because his long poetic career traverses several eras of recent political and poetic history. With no era has he struck a compromise. His has been an unmitigated dissent because he has cared to surgically examine each era in terms of its specific structures and processes of oppression. In his considered judgment, the arrangements of oppressive power, from the colonial through the postcolonial to the neocolonial, have only readjusted themselves:

The last night’s questions have not slept.
They come back as a new dawn cracks.

So he writes in his ninety-eighth ghazal. To what could the poet have assented then? Understandably, the establishment too, including the academic-critical, never owned him.

Hundal’s fearlessness, unforgiving directness, and stark clarity make him an outsider in the settlements of both political and literary authority, as these lines from “I Cannot Be Silent” exemplify:

There is blood on ministers’ lips.
Hungering packs of officials prowl.
Policemen’s batons rolls through streets,
sniffing for peace.
Limousines of the holy cruise
to save a harvest of faith in drought.
(2001; unpublished)

His is an exile by choice, a status that Avtar Singh Pash and Lal Singh Dil (two other great Punjabi poets of the post-1950s) also loved and lived. Of course, among the poets writing in Punjabi, Hundal has served the longest term as an outsider. In fact, he belongs among that community of the world’s outsiders to which Brecht, Lorca, Mayakovsky, Neruda, Hikmet, and Darwish belong. Like them, he is essentially a poet of the world; not merely of this or that part of it; nor of this or that people; and certainly not of another world. Like them, it is by virtue of being of the world that he is an outsider to it.

His gift to the ghazal, which has a long history as a poetic form of Indo-Perso-Arabic lineage, is no ordinary gift. As a writer of the political ghazal in Punjabi, his contribution is that he has taken the ghazal out of the confines of decadent feudalism and given it teeth, nails, and a thoughtful head. Likewise, he has contemporized the folk forms of Punjabi poetry, Jangnama Punjab (1995; The epic of Punjab) being his highest accomplishment in this rough and risky terrain. His success demonstrates that no insuperable wall divides modernity and folk culture. It also shows, incidentally, that the traffic between the two need not be only one way, with modernity inexorably appropriating folk culture. Folk culture, too, may have the equipment to handle modernity.

Hundal’s reader is struck as much by the in-your-face hardness of his imagery as by the receding wealth of his layered metaphor. He can serve you distilled terror with a facility unmatched by most poets of the subcontinent. Written during the height of the secessionist terrorist movement that ravaged the Punjab in the 1980s and early 1990s, his poem “The Moment – a Sketch” is an unforgettable illustration of the distinctive power of image:

. . . when fresh scent of the cooking rice will swim
in courtyards of our homes,
when grandma’s love will faces kiss,
when mouths will fill
with sweets
to welcome some auspicious news,
when someone will drop lucky oil
in welcome . . . ?
(1986; Kavita di Talash [The quest for poetry])

The apparent simplicity of “Where Is My Punjab?” – another poem of the same era – accommodates rare complexity in its layered metaphor. The poem captures the alienation as well as the delinquency of the young men who were compelled, cajoled, or coaxed to leave their homes during the Dark Decade of the 1980s. The poem is powered by the fluid dialectics of estrangement and belonging, of a shared humanist heritage and its disavowal, of the intensely personal and the apathetically political. Most tellingly, the dialectics play out in the desolate soul of a father searching for his missing son:

If you saw him
boarding a bus or train,
let me know.
I just hope he has not been shot dead
in one of those buses
by one of his own sons.
. . . . . .
Punjab
who was Baba Farid’s prayer for all,
Waris Shah’s long solemn call,
Shah Hussain’s wailing verse,
Baba Nanak’s song of peace,
the ecstasy of Bahu’s song,
and Shah Muhammad’s rhyming ache…

Where is he gone?

Ask if you can
the capital’s fortune-tellers.
(1988; Kavita di Talash [The quest for poetry])

W. H. Auden said poetry makes nothing happen. The finest poets of Punjab have proved him wrong. Yet again. It is the Punjab of its poets that has survived the vicissitudes of history and the depredations of politics.

What more can one ask of poetry?

Rajesh Sharma has recently translated, with Alpna Saini, a selection of Harbhajan Singh Hundal’s poems from the original Punjabi. His writings have appeared in Film-Philosophy, Brevity, Intersections, Tangentium, Chandrabhaga, Economic and Political Weekly, Mainstream, The Book Review, Hard News, Dialog, Indraprastha, and JNUJournal of the School of Languages. He is co-editor of South Asian Ensemble: A Canadian Quarterly of Literature, Arts and Culture. His forthcoming book, Indisciplines: Notes on Politics, Culture and Education, is being published by Three Essays Collective.