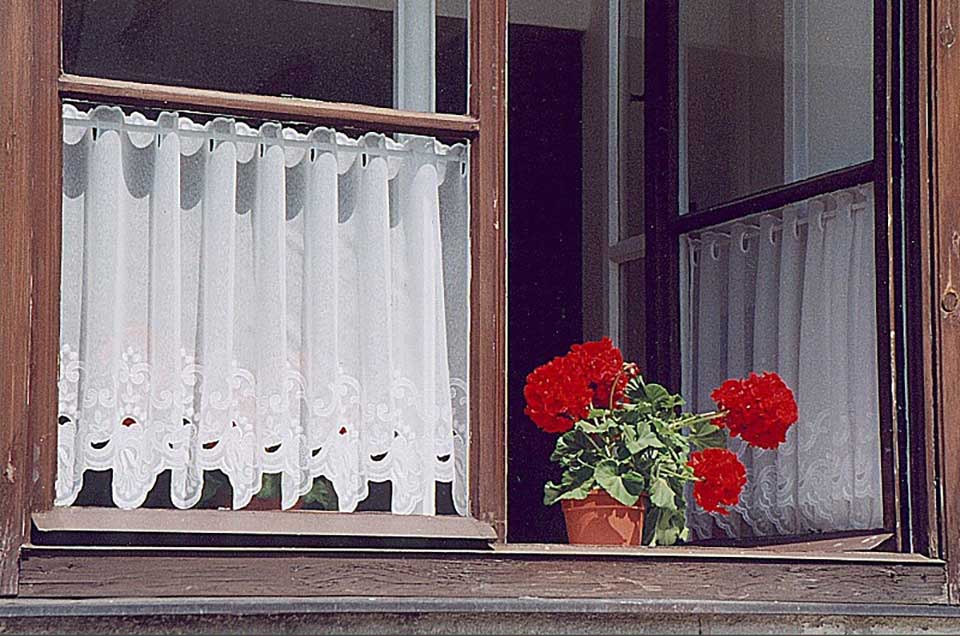 “He’s growing on me,” a friend commented a few days after I sent her a small selection of Yevgeny Kropivnitsky’s poems. Considering the derivation of the poet’s surname—from kropiva or krapiva, meaning “nettle” in the Eastern Slavic tongues—the reaction has a certain aptness to it. Come to think of it, Kropivnitsky is a most fitting name for a man whose poems’ hairy complications, their forest of tiny bristles, lie hidden in plain sight.

Kropivnitsky was born in Moscow in July 1893, the same month and year as Vladimir Mayakovsky, the tribune of the Revolution. Mayakovsky flowered early and burnt out quickly, taking his own life in 1930, while Kropivnitsky didn’t come into his own as a poet until the end of that decade. He was trained as a visual artist at the Stroganov Art School, and it was as an art teacher that he eked out his meager existence in ramshackle barracks on the outskirts of Moscow—first in Dolgoprudny, then in Vinogradov. He never sought to publish his work, instead compiling individual chapbooks, written out by hand and decorated with his own drawings, which he entrusted to his closest friends and students. By the 1950s, this circle of friends and students was significant enough to attract the attention of the KGB, which saw any “unofficial” clustering of artists as an anti-Soviet activity. The KGB dubbed the circle the “Lianozovo group”—naming it after the Moscow suburb where Kropivnitsky’s daughter Valentina (1924–2008) and son-in-law Oskar Rabin (b. 1928), both gifted artists, made their home and exhibited their friends’ work. Among the group’s—or, perhaps more accurately, school’s—other members were Kropivnitsky’s son Lev (1922–1994), also an artist and poet, as well as the poets Igor Kholin (1920–1999) and Genrikh Sapgir (1928–1999), whose fame now overshadows that of their avowed master. It was only in 1977, two years before Kropivnitsky’s death, that a slim volume of his poems and prose—tellingly titled To Smile Sadly—appeared in print in Paris. [i] And it was only in 2004 that his dedicated and discerning advocate, the poet Ivan Akhmetiev, managed to bring out a substantial volume of Kropivnitsky’s selected works in Moscow, allowing readers outside the poet’s inner circle to take stock of his accomplishment.[ii]

So what had Kropivnitsky been doing all those years? What emerged from that thoroughly marginal existence? Once might well begin with Kropivnitsky’s ars poetica, a winsome lyric from 1937:

A poet of the outskirts,
of quaint suburban homes –
I marvel at the mysteries
that haunt this little tome:
red geraniums in pots
lining dingy windows,
purring little kitty cats,
Tanyas with their Vanyas,
strolling slowly through the park
to a languid tune.
“. . . clobbered Mitya in the dark . . .”
A smiling crescent moon.

The small, quaint, cozily dingy elements of this suburban scene are perfectly at home, as it were, in the short, artless, cozily singsong lines of Kropivnitsky’s poem. Potted plants, kitty cats, languid tunes—a primitive sketch, almost a child’s drawing, of domestic comfort, down to the smiling crescent and a few vivid dabs of red for the geraniums. But then, of course, there’s that other dab of red, with its admixture of black and blue. The penultimate line drifts like an ominous whisper through a shabby Arcadia. Who is this poor Mitya, third wheel to the infinite pairs of Tanyas and Vanyas? Who on earth clobbered him? And who’s delivering the news: Vanya to Tanya, vice versa? Is this their brand of pillow talk? And what brought that smile to the moon’s face?

The Great Terror of 1937 was only a grotesquely massive iteration of the little terrors that find us all, even at the outskirts.

The poem’s date suggests a solution to the “mysteries” of Kropivnitsky’s “little tome”: 1937 marked the very height of Stalin’s first massive wave of repressions, known as the “Great Terror.” We may, if we so choose, impute Mitya’s beating directly to the state. But we needn’t. To associate that smiling, sickle-shaped crescent with official power would be to limit its sweep. Kropivnitsky knew well, all too well, how little prodding the average man needed to prove his inhumanity to man. Arbitrary violence and death are facts of life, everywhere and at all times. The Great Terror of 1937 was only a grotesquely massive iteration of the little terrors that find us all, even at the outskirts. 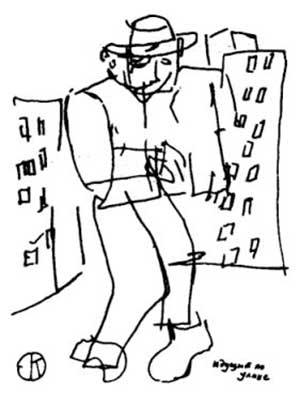 There’s something profoundly Beckettian about the world Kropivnitsky depicts. Its moon smiles, as the sun in Murphy (1938) shines, “having no alternative, on the nothing new.” And Kropivnitsky’s impoverished Soviet slum-dwellers, like the voice in The Unnamable (1953), can’t go on, yet go on. The prevailing mood in the poems is that of an ironic but genuine sympathy for their dogged persistence, their vain attempts to hide, or divert themselves, from the inevitable. After all, the poet himself is hiding at the outskirts; what separates him from his subjects is his constant awareness of the cold universe and its ineluctable laws. In a poem written in 1944, Kropivnitsky’s speaker demonstrates this burden of consciousness, which can make a farce of earthly existence:

There – the glare of stellar horror:
Mars is red with rage.
Here – electric lights, and people,
and a farce on stage.

There – the earth’s a gaping chasm:
space – a bare abyss.
Here? The people crane their necks
at a naked bust.

Another poem from 1944, written in the lilting meter of a lullaby, opens by urging the reader to “Hide away in a warm den / anywhere, anywhere!” and ends with “But they’ll find you in your den. / . . . / Smack your neck, break your legs, / kill you dead, kill you dead.” Once again, the date offers a solution; but, as before, we needn’t link the certainty of death with mass catastrophes. The Second World War may be raging, but one is just as likely to be hit by a bus as by a bullet, like the sun-blinded lover in another poem from the same year:

He was deep in love and young –
gave a necklace to his lass.
He was blinded by the sun
and fell under a bus.

“How’d it happen, how?” they asked,
as the crowd kept growing . . .
He just lay there by the post
and the blood kept flowing.

Toward the end of his life, in 1975, Kropivnitsky described the task he had set for himself as a poet and the reaction his work aroused: “When the poet begins to read his poems, the people listening expect to hear about him. Imagine their confusion when, instead of hearing the author read about himself, they suddenly hear poems about them. They start to fidget in their chairs, their faces grow puzzled, dark . . .” The poet, Kropivnitsky goes on, is interested in the “flesh and blood of existence. He shows you to yourselves, laymen, to the best of his ability.”

Dear reader, find the nearest mirror. In fact, you need look no farther than the poem itself: a verbal headstone polished to a reflective sheen.

So how do we appear in Kropivnitsky’s looking glass? As denizens of an unsympathetic universe, subject to the arbitrary cruelty of our fellow man, ourselves capable of great cruelty, awaiting death and, beyond it, a “Half-erased Epitaph” (1947):

This devastating verse is as cool to the touch and devoid of particulars as the object it describes, which is, in turn, as impersonal—or rather, as depersonalized—as what lies beneath it. The speaker’s insertions only underscore the lacunae. The name “Ivanov”—the Russian equivalent of “Smith,” say—not only fails to narrow down the possibilities but accomplishes the very opposite: it reduces the hope of recovering the deceased’s identity to an absurd joke. Who is this “OV,” this Russian John Doe? Dear reader, find the nearest mirror. In fact, you need look no farther than the poem itself: a verbal headstone polished to a reflective sheen. The poet “shows you to yourselves . . . to the best of his ability.” Nettlesome indeed.

But this is as cold as Kropivnitsky gets, and even here one perceives a sad smile, a stoic sympathy. The jaunty rigor of his verse forms doesn’t merely ironize his pitiful subjects—it also dignifies them. The poet dignifies them simply by having bothered to frame them so artfully. A cruder frame and harsher tone would have made the scenes Kropivnitsky depicts seem simply unbearable. Instead, like the poet, we find ourselves marveling at just how much man can bear.

Boris Dralyuk has translated and co-translated several volumes of poetry and prose from Russian and Polish, including, most recently, Dariusz Sośnicki’s The World Shared (BOA, 2014), with Piotr Florczyk, and Isaac Babel’s Red Cavalry (Pushkin Press, 2015) and Odessa Stories (Pushkin Press, 2016). He received first prize in the 2011 Compass translation competition and, with Irina Mashinski, first prize in the 2012 Brodsky/Spender translation competition. He is co-editor, with Robert Chandler and Irina Mashinski, of The Penguin Book of Russian Poetry (Penguin Classics, 2015) and the editor of 1917: Stories and Poems from the Russian Revolution (Pushkin Press, 2016).