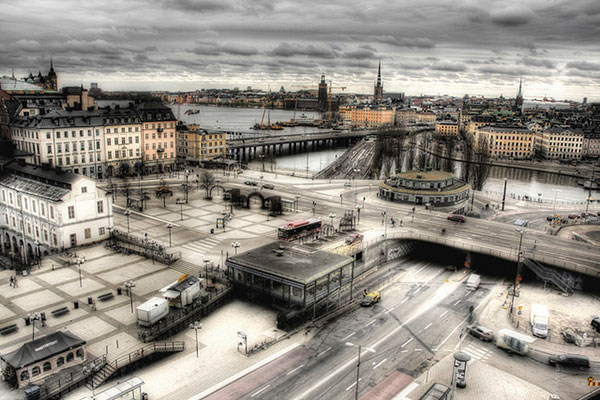 View of Stockholm, Sweden, from the Södermalm district. Photo by J. A. Alcaide.

In a corner of Stockholm, the Argentinean father of someone who was once, briefly, my lover, stumbles against the grey brick of houses, forgets to cut his hair or his fingernails, hoists himself on the stones lining the harbor. Screams in half-forgotten Spanish into the bright Nordic night. His son crosses the street and pretends not to recognize him. Marries a girl with red hair, shows me pictures of his blonde daughter. Schizophrenia is another name for what happens in the blinding night of cities.

Schizophrenia is another name for what happens in the blinding night of cities.

Somewhere else in the city, a colony of my countrymen, few women among them, gather and scheme new reversals for our small archipelago. They trade secrets in their mother tongue, try and shape new words in mouths that struggle to hold on to old sounds. Fifty years of waiting. They now feverishly download new pictures of home from the Internet to replace faded black-and-white photographs they kept pinned to the cold wall for decades.

Taslima walks for years through this city, piles on woolen coats and scarves and still feels cold. She insists on speaking in shud Bangla to her reflection in the glass walls. Finally she runs and squats on the other side of Bengal, saying, Where is my language, there are my people.

Just because people travel does not mean they move in the same way. Here is Alfred Nobel’s itinerary: Stockholm – somewhere in Finland – St. Petersburg – Paris – then cities in Italy, Germany, the United States of America. He will go home to Stockholm again. His empire already global. In the end, how many ghosts will visit him at night? The dead of the Crimean War? His own brother exploding in nitroglycerine? They will say—it was the sleepless nights that made him write that famous will. Others, more cynical, will say—it’s been done before. A way to move the eyes elsewhere, into the light, away from the refuse, the wreckage.

Others, more cynical, will say—it’s been done before. A way to move the eyes elsewhere, into the light, away from the refuse, the wreckage.

There: Not long ago, in the city where I was once a child, a powerful woman from the Canadian High Commission shook hands with a Tanzanian minister. I believe words like “foreign aid” and “development” were used. Days later, dynamite exploded in gold mines worked by local miners in the north. New names quickly were given to old places. Chain-link fences were erected. The lawyer working for the families of the dead miners tells me they keep denying him a visa to come speak in Canada. Here: A notable “left” magazine will ask me to write a small piece on “an idea whose time has come.” I will say the topic of the day is Canadian amnesia and give the editor six hundred words. In response, she will write me frightened emails. Finally, the magazine’s lawyer will return my text to me. He will highlight the names of Canadian mining companies with yellow ink and demand “small edits.” When I refuse, the magazine’s editor and I will cordially and not so cordially argue. About silence. About truth. About responsibility. Our exchange will total far more than the six hundred words she will pay me for. I will never be asked to write for this magazine again. Small things. Words on a page. A little bit of dynamite. Unknown dark bodies. The power to silence. Gold. I am still listening to screams in the darkness of the mines.

In 1898 there are vultures flying over the dead in Omdurman. A young Winston Churchill will describe the beauty and the necessity of this as he will describe the need for concentration camps and scorched earth during the Boer War for British control of the gold-rich territories of the Transvaal. In 1953 Churchill will be awarded the Nobel Prize in Literature. From 1896, the Nobel Dynamite Trust in South Africa is the world’s largest producer of dynamite. After the Boer War, it becomes the British South Africa Explosives Company. The Nobel Trust retains a controlling interest.

Ideal Literature. Or Idealistic Literature. The judges waste time in quarrels. No to Zola, no to Tolstoy, to Ibsen, to Nabokov, to Borges, to Rushdie. Sartre will himself close the opened door with a resolute bang. Auden—slated for nomination, sly, wrinkles ablaze—will hold his arms open for intimate embrace and say, Dag, Dag, you are one of us, aren’t you? Oh Auden, beloved fool. You blew his cover. You will never give a speech in Stockholm. Never caress Christopher with the prize. As if you even care—you were the kind to take a poem back if it no longer rang true. And the truth, you knew, slides deep under covers. Takes flight in night.

No straight line. Just webs crisscrossing the dark. No place of purity or for purity in literature.

No straight line. Just webs crisscrossing the dark. No place of purity or for purity in literature. There are other writers, more guarded, perhaps more cognizant of the intransigence of webs, of the power wielded in certainties. They will take the money, the name, the fame, the recognition—prop the door open with their foot—signal the “dark hordes” behind to follow, elbow their way into the gap, point a torch at the well-fed, the connoisseurs, the consumers of fine wine and fine literature, the decision makers, the judges, leave space for silence.

And so, Saramago conjuring himself out of the soil of literature and genealogy:
And now also I wish to thank the Portuguese writers and writers in the Portuguese language, the ones of the past and of today: It is through them our literature exists. I am but one of them. I said that day that I was not born for this, but it was given to me.

Najwa Ali writes, despite intimate negotiations with silence. Crosses borders, sometimes inadvertently. Recent publications include essays and poems in World Literature Today, Room, Wasafiri, and Warscapes. Her essay “Writing, in Transit” won Room’s CNF Prize and was nominated for a Canadian National Magazine Award. Currently reediting a recalcitrant novel, completing a short-story collection, and embarking on a new novel. Can be found, sometimes, on Twitter @Najwa_Layla.